The Time the Soviet Union Fired a Secret Space Cannon

Back in the day, the United States and the Soviet Union both had their eyes to the sky. Space was seen as the last frontier for the Cold War they had long been waging, and they constantly sought to one-up each other. Space was a potential battle ground not just for trying to gain an upper hand, but also as a stage on which they could flex and pose for the world, constantly trying to show who was best. It was in this climate of competition and trying to master the domain of space that the Soviets would build a tactical armed space station, and become the first, and so far only, nation to actually fire a space cannon.

There was a time when the Soviets were winning the space race. Initially they came out of the gate strong, with many decisive victories. The launching of the Sputnik on October 4, 1957 was the first manmade object placed in space, followed by putting the first living animal in space in the form of a dog named Laika, and then there was the Soviet unmanned space probe Luna II, which on September 14, 1959 became the first manmade object to land on the moon. They followed this up on April 12, 1961, when Soviet cosmonaut Yuri Gagarin was launched into orbit for 108 minutes, becoming the first human being in space. At this time the Soviet Union were showing that space was their domain, which made the United States very nervous indeed. At the time space was being increasingly seen as sort of the battlefield of the future, with all manner of potential uses for reconnaissance satellites or even proposed orbital weapons. The early Soviet dominance of space was alarming and unacceptable for the Americans, not only militarily but also ideologically, as it showed that communism was winning, so they did what they were good at and started throwing tons of money at their space programs.

Flush with cash from its newfound industrial and economic surge in the wake of World War II, the United States doubled their efforts in the space race, and it paid massive dividends. In quick succession they launched their own satellite, put astronaut Alan Shepard into space, and then performed their coup de grace on July 20, 1969, by landing astronauts Neil Armstrong and Buzz Aldrin on the moon. In short order The United States had upped the ante and clawed ahead of the Soviets to leave them reeling. The U.S. now had the upper hand, and the thought of American satellites circling the globe unchecked terrified the Soviets, only made worse when the U.S. began preparations for a manned space station called the American Manned Orbital Laboratory (MOL) program. This just wouldn’t do, so they began a space station program of their own.

The Orbital Piloted Station (OPS), code-named Almaz, meaning “Diamond,” was a top-secret program launched in 1964 and carried out by the Soviets to put their own manned space station into orbit for the purpose of military reconnaissance. To this end it was to be fitted with cutting edge spy equipment, cameras and radar, and it was designed to be able to be resupplied while in orbit. It was to be the first of several planned military space stations, and money was poured into it. All of this was very hush hush, of course, hidden behind the façade that it was to be a part of the civilian space station program called Salyut. They didn’t want the Americans getting wind that they were planning on putting a military apace station in orbit, but they had to be sure their investment stayed safe. At the time, both sides were very concerned with anti-satellite and space station weapons, paranoid that anything put up into space was liable to be shot down or straight out stolen, so the Soviets made sure that one aspect of the Almaz was developed, and that meant they wanted to mount a big space cannon on it. 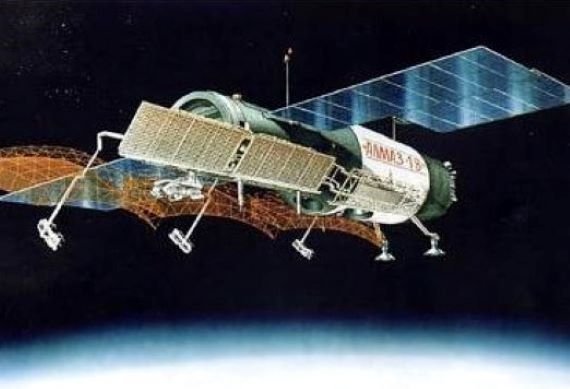 In order to arm their fancy space station, the Soviets designed the R-23M Kartech, basically a modified version of the Rikhter R-23, which was a 23mm, fully automatic tail gun designed for the Tupolev Tu-22 Blinder supersonic bomber. The new modified cannon weighed 37 pounds and could supposedly fire up between 950 to 5,000 rounds per minute, that could hit targets with accuracy up to two miles away. It was designed to be mounted on the forward belly of the Almaz station, but firing the weapon was the tricky part. As the cannon was to be mounted in a fixed position, actually aiming it would require the entire space station to be moved into a firing position. Another problem was that thrusters would be needed to counterbalance the recoil of the weapon, as every shot fired would potentially push the space station out of orbit, a big problem in the weightless vacuum of space. Nevertheless, the Soviets went ahead with arming their space station.

Between 1973 and 1976, the Soviets would launch three crewed military reconnaissance stations with the Almaz program, which were disguised under the civilian Salyut program and launched under the names Salyut 2, Salyut 3 and Salyut 5. While the Salyut 2 failed shortly after achieving orbit, the Salyut 3 and 5 were successfully tested, and the Salyut 3 managed to be a historic first when it actually test fired its space cannon in orbit. The test occurred on January 24, 1975, and although the cannon had been tested on land, since no one had ever fired it in space no one was really sure how the weapon was going to affect the station. For this reason, the test was scheduled for shortly before the Salyut 3 was to deorbit and long after the crew had left. The station was at the time being remotely operated, and when the weapon was fired thrusters were used to counteract the recoil. According to reports, approximately 20 rounds were fired in one to three controlled blasts, all of which purportedly burned up in orbit, although the exact results have remained classified. To this day, the Almaz program represents the only armed and crewed military spacecraft ever flown, a rather interesting and somewhat unsettling milestone. 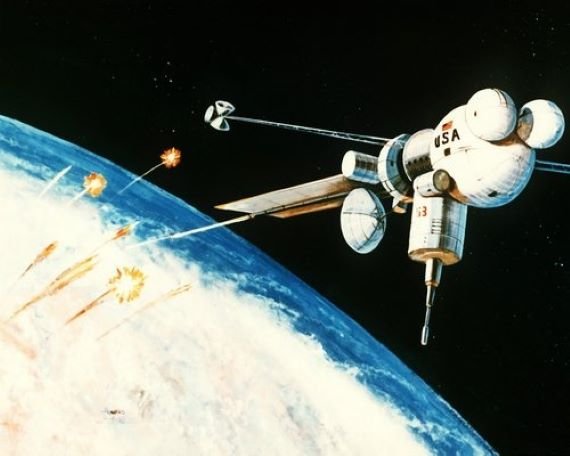 At the time of this space cannon test, the U.S. had no idea that any of this was going on. They of course knew about the Salyut 3, but at the time they were unaware that it was a military spacecraft and certainly knew nothing about the fact that it was armed or that the Soviets planned to actually test the weapon. In fact, it was not until long after the Cold War had ended and the end of the Soviet Union, that the information on the test firing would get out with the Russian Defense Ministry finally revealing it on the Russian military show Voennaya Priemka. However, the test results are still classified, the footage from the experiment was destroyed on reentry, and there is only one known photo of the actual cannon used aboard the Salyut 3.

Although we don’t know the exact results of the test firing, it must have been successful enough for the Soviets to see space-based weapons as viable, as they planned for future space stations to be armed with interceptor missiles. However, in the end the Almaz program never really caught on. Manned space stations were increasingly seen as too cost-inefficient, and the military lost interest, instead focusing on automated satellites for reconnaissance purposes. The Almaz program was grounded and absorbed into the civilian Salyut program, but much of it still remains classified. This was the first, and as of yet as far as we know the last time anyone tried to fire weapons from space, but make no mistake the interest is still there, and who knows how many secret programs there might be. Although there are many laws now in place to keep this sort of thing from happening, there will likely always be those who see space as a potential battleground, and now you know that the Soviets took the first step with their clandestine operation.

Titan’s Kraken Mare Lake May Be More Than 1,000 Feet Deep