When we think of Loch Ness, Scotland, it’s all but certain that the first thing that will spring to mind is the Loch Ness Monster. Or, to be correct, the Loch Ness Monsters. A large number of people claim to have seen the long-necked, humped leviathan of the deep. Some have even photographed and filmed it. Nessie, as the beast is affectionately known, has been a staple part of the world of the unexplained since 1933, when the phenomenon of the monster exploded in spectacular, planet-wide fashion. Since then, millions of people have flocked to the shores of the 22.5 miles long and 744 feet deep loch, all in the hopes of seeing the elusive creature. Attempts have been made to seek out Nessie with sonar-equipment, aircraft, balloons, and even submarines. There is, however, something else in the history of Loch Ness. It's a story that doesn't involve monsters, but something else entirely different.

It was in 1976 that the remains of a Second World War-vintage aircraft were found in Loch Ness. It was a Vickers Wellington Bomber, the brainchild of one Barnes Wallis, a man who created a revolutionary "bouncing bomb" during the hostilities with Nazi scum, and which was designed to destroy German dams. The Dam-Busters, as the team that dropped the bombs was known, succeeded beyond their wildest dreams, leaving a significant scar on Hitler’s war-machine. The British Royal Navy conclusively identified the aircraft as a Wellington. They even managed to identify its serial number: N2980. There was nothing particularly mysterious about N2980: as far back as late 1939, it had taken part in no less than fourteen bombing missions over Germany, before being transferred to Lossiemouth, where it was then used to train newly drafted aircrews. Official records on the crash were quickly accessed and told a memorable story.

Military records showed that the aircraft ditched into Loch Ness on December 31, 1940 – New Year’s Eve – after experiencing problems with one of the engines during a turbulent snow storm, high above the domain of monsters. It was when the crew was over the Monadhliath Mountains - which are to the southeast of Loch Ness - that problems began. They were problems which led Squadron-Leader Nigel Marwood-Elton to give a hasty order to jump ship, so to speak: four crew-members quickly parachuted out of the plane. Tragically, one of them, the rear-gunner, a 20-year-old, Sergeant John Stanley Fensome, was killed when his parachute catastrophically wrapped itself around one of the wings of the doomed plane. 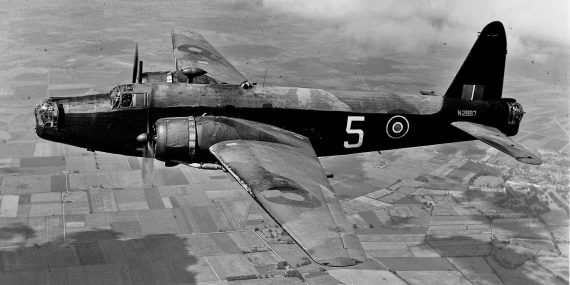 While the crew was racing to exit the aircraft, Marwood-Elton and the co-pilot, named Slater, stayed on-board, struggling to control the aircraft as the dusk skies threatened to give way to darkness. With the snow hammering down and a powerful wind blowing, they maneuvered the plane closer and closer to the loch and, incredibly, actually managed to land it on the surface of the water, ditching near Urquhart Castle. With water already flooding into the aircraft from all corners, they scrambled for an on-board dinghy. The two then clambered out of the plane and onto the starboard wing, where they blew up the dinghy and used it to row to shore, as the aircraft was swallowed up by the waves, practically intact. As they reached land, the two men managed to flag down an astonished truck driver, who quickly drove them to Inverness – no doubt for a couple of wee and hearty drams to help steady their nerves.

It wasn’t until September 1985, and amid more than a few hazards and hiccups, that the bulk of the aircraft was finally raised from the water, with the recovery of numerous, scattered fragments continuing into 1986. Incredibly, and almost unbelievably, the taillights of the plane were still in good, working order. The well-preserved remains of N2980 can now be seen on display at the Brooklands Museum, Surrey, England.