Just recently I wrote an article about Britney Spears and Loretta Lynn’s haunted mansions, so now let’s take a look at Adele and Nicolas Cage’s paranormal encounters in their homes.

In 2011, singer Adele moved into a mansion in Sussex, England, but she quickly found out that it was inhabited by several ghosts. The Tudor-style Lock House was built around the year 1900 and was once used a convent. Shortly after moving into the mansion, Adele began hearing unexplained noises that scared her so much that she refused to sleep alone in the mansion. She was especially afraid of the hallways. In fact, she was so terrified of staying alone at the house that she hired a bodyguard to stay with her at all times while she was there until she decided to move out. 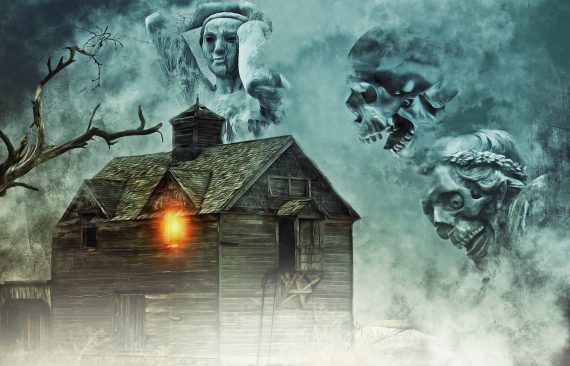 Actor Nicolas Cage is another celebrity who lived in a haunted house and this one has an exceptionally dark history. He briefly lived at LaLaurie Mansion in New Orleans and had several terrifying experiences while staying there. In fact, he only slept one night there because of the paranormal activity.

LaLaurie Mansion has a long history of hauntings – about 200 years worth of ghost stories. Delphine LaLaurie kept several slaves on the property and was said to have tortured them. In one of the rooms where the slaves were often held, visitors have often heard disembodied moaning sounds.

Back in 1894, a tenant who had been living in the house was found murdered. According to his friend, the deceased man was having trouble with spirits in the house and claimed that a demon wanted him dead.

From the middle to the late 19th century, the mansion was also used as an all-girls school and several of the children reported that a “woman” had abused them, causing scratches and bruises on their arms. When asked who hurt them, the children kept repeating “that woman”. This led many to believe that the spirit of Delphine LaLaurie was still torturing innocent victims even in the afterlife.

A couple of weeks later, the guide was out with another group when they stopped underneath street lights that had been burnt out for several weeks. However, when she mentioned the name “Leia”, the lamps flickered on and when she said the name again, they turned off. Leia was a slave who fell to her death in the courtyard in 1833.

Other paranormal activity includes hearing unexplained footsteps throughout the mansion and feeling a negative energy surrounding those who visit the location. It’s not surprising that Nicolas Cage only spent one night there.

True Identity of Ancient ‘Hobbit’ Species May Have Been Found