Aleister Crowley and Boleskin House near Loch Ness are forever linked by the times the occultist spent there between 1899 and 1913 performing black magic rituals. Even after it partially destroyed by multiple fires, there’s enough interest in Boleskin for it to be restored and reopened for tourists and followers. However, that’s not the only place in the UK with a reputation for Crowley occultism. A cottage in a remote location in Cornwall was also used for his mysterious rituals and was open to anyone willing to make the long hike … until very recently when a new owner cracked down on loiterers, trespassers and occultists.

“To this day it has a sinister reputation amongst the locals. The fact alone that it is rather hidden and isolated from the community has prompted stories of hauntings and witchcraft. These stories had been partially endorsed by the presence, in the 1930s, of the self-styled ‘Great Beast’, Aleister Crowley. He is supposed to have summoned up the very Devil himself in the cottage and performed a black mass down the hill in Zennor’s church.”

David Whittaker wrote that in ‘St Ives Allure’ in 2018 about Carn Cottage, a now rundown house high up on a moor near Zennor in West Cornwall. (Photos here.) According to Cornwall Live, the building can barely be seen from B3306 due to its remote location and the wild landscape surrounding it. However, if Crowley really did spend time in Carn Cottage, it wasn’t the remoteness alone that attracted him, as author Paul Newman found out while investigating it for his book, “The Tregerthen Horror.”

“Open-minded research reveals an ancient reptilian extra-terrestrial race from the constellation of Draconis. Satanists conjure these reptilian beings in their rituals and my own researches suggest that Aleister Crowley was using powerful dimensional gateways around Zennor to summon and communicate with these creatures. The ruling cast of this race are 8-12 feet tall with horns and huge wings. This is what, I believe, Ka Cox saw that frightened her to death, and I am sure the same applies to the man who was with her and who ended up in Bodmin Asylum.”

The story of Ka Cox is what makes Carn Cottage terrifying to locals to this day. Mrs. Arnold-Forster, a nationally known Neo-Pagan celebrity better known as Ka Cox, was said to have visited the cottage on May 21 1938 at the request of her friend, Ellaline Vaughan, who was renting it with her husband. Some stories say Vaughan was terrified that the cottage was haunted; others say she was terrified because Crowley himself was there conducting a satanic ritual. Either way, Ka Cox quickly became ill herself and died, while Mr. Vaughan ended up in an asylum. 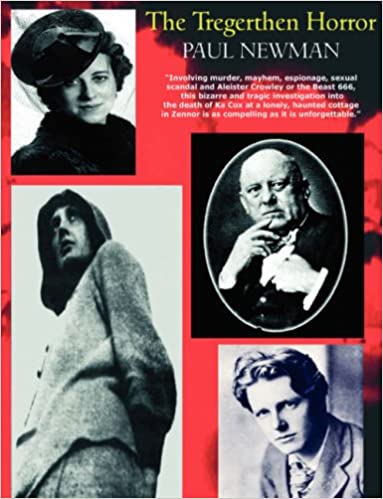 Carn Cottage was abandoned after this until 1945 when an artist bought it and it became a gathering spot for other artists. It remained that way through multiple changes of ownership until 2014, when it was abandoned for good and largely forgotten … until The Daily Mail ran a story on “thrill seekers” visiting it (with some excellent pictures of the cottage and the view). That attracted more, including a reporter for Higgypop, whose article this week details a visit where he encountered evidence of renewed occult activity and found that the current owner is making a strong attempt to stop it and keep outsiders away.

Is a warning sign enough to keep away followers and fans of Aleister Crowley? Did the remote location deter Crowley himself? Did Crowley really attempt to contact a reptilian race?

Aleister Crowley is truly the Beast that keeps on beast-ing.

When the Loch Ness Monsters Choose to Change Their Forms