Clever Hans: The Wonder Horse Who Could Do Math and Other Amazing Things

There has long been debate on just how intelligent animals other than humans are capable of getting. Some may say that animals such as chimpanzees, dolphins, and even elephants rank high on the scale, perhaps even approaching human levels in some respects. Studies into animal cognition and psychology have been ongoing, with results that often are murky and leaving us in the dark, but every so often there comes a case that seems to show that in some cases they can be phenomenally intelligent beyond what we thought was even possible. One such case involves an animal some might not immediately associate with human levels of intelligence, and here we get into the strange tale of a very peculiar horse that was allegedly capable of astounding mental feats.

In 1891, a German high school mathematics instructor named Wilhelm Von Osten began an experiment into the realm of animal intelligence, which he was obsessed with. His plan was to teach animals how to count, and for his purposes he used a kitten, a bear cub, and his own horse, named "Hans." To carry out his experiment, Von Osten tried to train the animals to tap out numbers with their paws or hoof in the case of Hans, showing them the number first and then tapping for them to see if they could retain what was being taught. The cat and bear were apparently not very good at this at all, and did not grasp the training, but Hans surprised Von Osten by not only picking it up, but excelling at it, able to tap out numbers up to 10 when shown them on a blackboard. Hans then graduated to doing simple arithmetic, then multiplication, division, basic square roots and fractions, and then actually recognizing letters to spell out words on a specially made letter board. To Von Osten it was a resounding success, convincing him that Hans’ intelligence was far above that of any normal animal, and leading him to decide to put Hans on exhibition.

Von Osten began doing tours around Germany to show off Hans’ abilities to stunned crowds. When asked “what’s 2 plus three?” for instance, Hans would tap his hoof five times, much to the delight of the audience. He would also use the letter board to spell out words to answer questions asked of him, spell names, identify people, recognize people in photographs, tap out the day of the week or time of day, identify colors, read the clock, count the number of persons in the audience, recognize and identify playing cards, even differentiate musical tones, as well as other advanced cognitive abilities, and he also demonstrated the ability to answer more abstract questions and mathematical problems. For instance, one such question was “I have a number in mind. I subtract 9, and have 3 as a remainder. What is the number I had in mind?” Hans tapped his hoof 12 times. These questions could be given orally or written on a chalkboard, making it seem as if Hans could not only understand what was asked of him, but also read as well. By some estimates, Hans had the mental capacity of a 14-year-old human child. As word of this amazing horse spread, larger and larger crowds flooded in to see these shows, and what was being called “Berlin’s Most Wonderful Horse” and “Clever Hans” became a popular and major attraction.

As the news of Clever Hans spread and he became a sensation, the German government became very interested in Hans and his purported abilities. To this end, the German board of education formed a commission made up of 13 people, including a veterinarian, a circus manager, a cavalry officer, schoolteachers, and the director of the Berlin zoological gardens, called the Hans Commission. Their job was to investigate the claims and determine if there was any scientific validity to what Von Osten was claiming. After in-depth analysis of the shows and examination of the horse and Van Osten, in 1904 the commission came to the conclusion that there was no evidence of trickery and that Hans was the real deal. It seemed like amazing proof that animals were capable of human-like intelligence, but not everyone was so convinced. One of these was a German comparative biologist and psychologist at the Psychological Institute at the University of Berlin, by the name of Oskar Pfungst.

Not satisfied with the findings of the Hans Commission, Pfunst would launch a more in-depth and strictly controlled scientific investigation of his own. He was able to deduce that since the horse could answer questions even when not asked by his handler, that Van Osten was not perpetrating a fraud. However, Pfungst was able to find that Hans could only answer the questions if the questioner knew the answers and if the horse could see them. If Hans was fitted with blinders, unable to see the questioner or Van Osten, he was unable to answer. Of one such test of Hans’ math abilities, Pfungst would say:

Mr. von Osten whispered a number in the horse's ear so that none of the persons present could hear. Thereupon I did likewise. Hans was asked to add the two. Since each of the experimenters knew only his own number, the sum, if known to anyone, could be known to Hans alone. Every such test was immediately repeated with the result known to the experimenters. In 31 tests in which the method was procedure without knowledge, 3 of the horse's answers were correct, whereas in the 31 tests in which the method was procedure with knowledge, 29 of his responses were correct. Since the three correct answers in the cases in which procedure was without knowledge evidently were accidental, the results of this series of experiments show that Hans was unable to solve arithmetical problems. 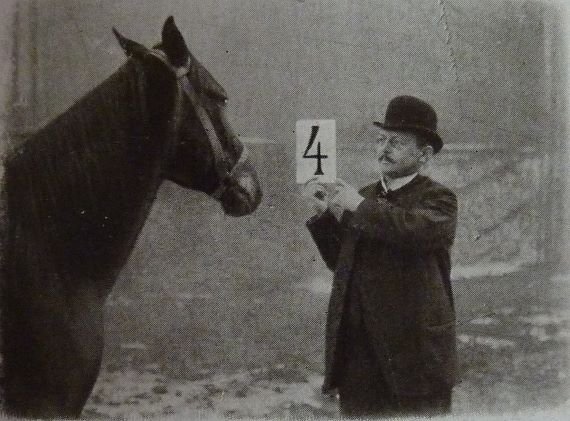 It also became apparent that the horse seemed to be reacting to subtle, involuntary cues or tells from his handler and audience members, such as body language, posture, muscle tension, and facial expressions, which the horse used to gage when to stop tapping, completely unbeknownst to them. The cues were most certainly subconscious, with no evidence of intentional fraud, but it did show that the horse was able to process very subtle changes in those it observed and process those to form the correct answer. This was further underlined when it was determined that the farther Hans was away from the questioner, the less accurate he became, suggesting that he had to see the questioner clearly in order to process their cues. The final conclusion was that Hans was entirely dependent on external stimuli from the questioner. Pfungts’ work was so thorough, meticulous, and strictly controlled that it became the basis for a whole new concept in behavioral psychology and animal cognition called “The Hans Effect,” also known as the “Cueing Effect,” in which the responses of animals and even humans can be influenced by subtle visual cues by outside forces, often without them even being aware that this is occurring. This effect has been seen in many working animals, such as drug sniffing dogs giving false positives due to involuntary cues from their handlers. However, even if this was the case, for Hans to be so proficient at answering so many complicated questions, he must have been very clever to some degree in order to translate all of these tells.

This whole theory did not sit well with Von Osten, who continued to insist that this was not the case at all, truly believing that Hans possessed these amazing abilities and was perhaps even psychic. It shows somewhat in the fact that he never charged for his shows, which he kept carrying out to the delight of crowds right up to his death in 1909. Hans would then change hands several times after that, his show business days behind him and allegedly being drafted to be used as a war horse in World War I, where he sort of disappeared into the mists of time, his fate unknown. We are left to wonder just how smart Clever Hans was. Could he really do all of these amazing things, or was it just reading cues as Pfungst said? To many of those who saw the horse in action this was very real, and since he was never studied any further it all remains a mysterious chapter on the landscape of animal intelligence and what they are perhaps capable of.

When the U.S. Government Quietly Watched a Man Who Said He Met Aliens