About 6,200 years ago in what is now Croatia, 41 people were murdered and their remains were put into a mass grave. There have been many questions regarding the massacre and now new DNA analysis has deepened the mystery.

Back in 2007, a man living in a small village in the hills of Potočani, Croatia, began digging in the ground to build a garage and that’s when he unearthed the grave holding the remains of the 41 victims. The pit was just 2 meters in diameter (6.6 feet) and one meter in depth (3.3 feet).

Archaeologists from the University of Zagreb took a look at the mass grave and at first they thought they were the remains of soldiers from World War II or the Croatian War of Independence. However, after DNA analysis and radiocarbon dating of the bones, they determined that the victims were from a much earlier time period – around 4200 BC.

Of the 41 victims, 21 were male and the other 20 were female, ranging in age from 2 to 50 years old. 21 of the 41 victims were children between 2 and 17 years of age, while the 20 adults were between 18 and 50 years old. They suffered blows to the back of their head (some with as many as four punctures) with no defensive wounds on their arms, suggesting that they didn’t (or couldn’t) fight off their killers. (Pictures of some of the skulls and the mass grave can be seen here.)

So, who were these people? According to genetic analysis, the majority of the victims were not related (only 11 of them were close relatives) although they did have common ancestry, meaning that they came from the same local population.

The mystery remains as to why they were all buried together. Mario Novak, who is the head of the Laboratory for Evolutionary Anthropology and Bioarchaeology at the Institute for Anthropological Research in Zagreb, Croatia as well as the lead author of the study, stated, “The only plausible scenario was a massacre,” adding, “In this case, it was just random killing, without any concern for sex and age.” 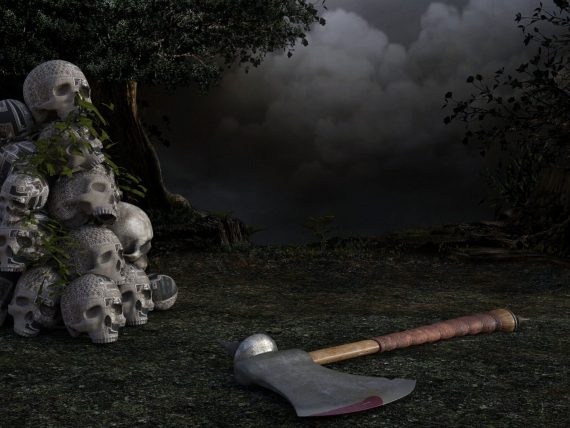 Novak went on to say that since the victims shared common ancestry, “...we can exclude that this massacre was associated with the influx of new immigrants.” The question of why they were massacred has yet to be unanswered, although there are theories. Some archaeologists and climatologists believe that they were murdered because of climate change that caused floods or droughts in addition to an increase in population which may have created fights among the locals over resources.

While DNA analysis has revealed interesting information about the victims, it also raises even more questions such as why these mostly unrelated people were massacred; did something happen prior to the massacre; who chose the victims; who killed them; and why didn’t they fight back?

The study was published in the journal PLOS One where it can be read in full.

Goblins are Blamed For Invisible Torment of a Boy in Botswana