Goblins are Blamed For Invisible Torment of a Boy in Botswana

Goblin stories of the shape-shifting, often invisible, sometimes murderous kind are staples in South Africa and Zimbabwe even in modern times, so one from Botswana is unusual. Referred to in those countries as Tikoloshe, Tokoloshe, Thokolosi or Tokolotshe, belief in them is strong enough that even the local police fear them. Doubters point to the fact that these sprites or water spirits can be conjured up by religious leaders and also banished by the same leaders – a classic religious scam. That didn’t faze the family of a young boy in the village of Tobane in eastern Botawswan, who became so terrified by an unseen force seemingly attacking him that his family was forced to send him away. Tikoloshe, bullying or something else? 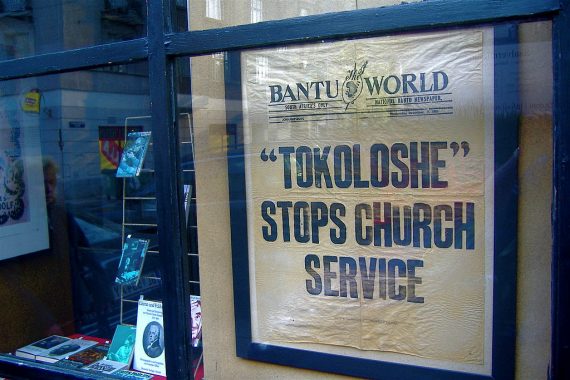 “Like this past Saturday, he woke up screaming saying something was hitting him. He was evidently in pain but I could not see anything. I don’t know why someone will go around claiming a Thokolosi attacked my son. How do they know that? I’ve never seen a Thokolosi in my life and just like everyone else I’ve no answers.”

The boy’s grandmother, Mmatala Modise, told local media source The Voice that at first she suspected bullying by an “MmaPatricia,” who is the “daughter to a traditional doctor in the village.” It’s possible that she attends the same Tobane Primary School as her 11-year-old grandson, who came home complaining of an invisible slapper often enough that his parents took him out of school and sent him to live in Mmadinare. While Mmatala Modise believed the ‘spirit’ was a real person, something changed her mind.

“The first time it happened, I was at a neighbour’s house around midday when I heard a loud bang on the roof. I initially thought teenage boys hunting birds may have thrown the stone. However, the second stone landed and together with my neighbour we went to investigate.”

“This thing continued for some time and as you can see, all my windows are broken, but that’s as far as it goes. No passersby have been hurt, nor stones thrown at passing cars. The village leadership even came here to assess the damage and none of them was slapped by the alleged Thokolosi.”

That was enough to bring in village leaders – who found nothing – and a village pastor, Prophet Frank Mod of Heavenly Embassy International Church, who has dealt with these stories before.

“I once had a similar case in church where a man complained that a hairy female creature joined him in bed every night. He said the creature was really scary and had been tormenting him for years. We prayed for him and he was delivered.”

Sexual assault is one thing often reported by alleged Tikoloshe victims -- stealing underwear, unwanted touching and even rape are others. That leads Prophet Mod to use marriage counseling rather than Thokolosi exorcism to deal with them. Of course, there are plenty of others who would rather feed on the superstitions. In 2020 in Zimbabwe, a goblin or Thokolosi was blamed for killing livestock and police allegedly saw it and ran away. Fake prophets who came to “help” were caught hiring a “little person” to impersonate a goblin so they could catch him and collect their $7,000 fee.

Many Tikoloshe stories involve stone-throwing, which is sometimes a poltergeist activity but more often done by tormenting humans in hiding. There is also some thought that the Tikoloshe killings can be blamed on hyenas, whose behavior and laughing noises have long linked them to witchcraft – some stories have witches shape-shifting into apelike Tikoloshes and riding hyenas. In a sense, hyenas are the trickster coyotes of southern Africa.

That doesn’t solve the problem of the 11-year-old boy in Botswana who claims he’s slapped by an invisible force. Perhaps it’s time for a change – with so many adults today fearful of unseen forces that control their lives, maybe we should stop planting the seeds of imaginary evil creatures in the minds of kids just to get them to go to sleep or finish their dinners.

Cannibals, Mountains and Death: All in the U.K.