Hollow Earthers believe our planet is filled with giant empty spaces that are occupied by beings who may be aliens, Earthlings or something else. Giant Impacters believe the Moon was formed when a young planet collided with Earth, knocking out the giant chunk that became our satellite. If these two theories were the circles of a Venn diagram, the intersection might be filled with the theory of Qian Yuan, who believes the Moon was formed by a giant collision and two blobs that were once the colliding planet are still occupying space inside the Earth and affecting its magnetic field as if they were alive. Giant blobs inside the Earth? What kind of Jules Verne fever dream is this?

“They are the largest thing in the Earth’s mantle.”

Qian Yuan, a Ph.D. student in geodynamics at Arizona State University (ASU), is referring to two massive blobs, one below West Africa and the other below the Pacific Ocean, that are about 1000 km tall and thousands of kilometers wide. These blobs have long been known to exist – seismologists detect a slowdown in the velocity of seismic waves when they reach these areas, indicating that the blobs are more dense than their surroundings. That has earned them the name large low-shear velocity provinces (LLSVPs) but no one has been able to determine what they are nor how they got there.

“This crazy idea is at least possible.”

Yuan told Science Magazine the “crazy idea” began in an ASU class about the “giant impact hypothesis” – the idea that an infant Earth collided with a Mars-sized planet called Theia, breaking off the chunk that became the Moon. However, no one has an explanation for what happened to Theia. Since no one has been able to explain the blobs either, Yuan decided to try linking the two and explaining both. 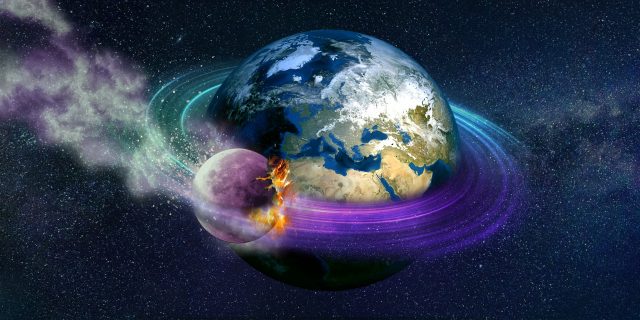 Yuan modeled Theia’s collision with Earth, varying its size, and focused on what could have happened afterward. With a Theia the size of Earth, its liquid core would have quickly merged with Earth’s. However, at that size, its mantle pieces could have survived intact and remained near the core. Studies of moon rocks from Apollo missions show they have a higher density that Earth rocks, which implies they came from Theia. A model with Theia’s mantle rocks at 1.5% to 3.5% denser than Earth’s would survive and end up near the core, and a model with Theia the size of Earth would leave pieces the size of the LLSVPs or blobs.

Does this prove Yuan’s crazy idea is really possible? He presented a paper on it at the recent online ‘52nd Lunar and Planetary Science Conference 2021’ and wasn’t muted, so that’s a good sign. However, he told Vice that there’s still a missing piece to the mysterious pieces that could be solved by another lunar rock mission.

“If people can find some chemical relationship between the lunar mantle materials with the LLSVPs, it may suggest they have the same ancestor: Theia. Otherwise, these two materials shouldn’t have any relationship. The LLSVPs are thought to be very old, and have noble gas isotopes. If the mantle rocks of the Moon also have similar noble gas isotopes, I think that’s the final task for our hypothesis.”

In the meantime, researchers are also looking in the opposite direction inside the Earth for more smaller chunks of Theia. There’s also another Venn diagram circle to add – if early Earth was hit by one massive planet, it could have been hit by more. That would mean the mantle may be filled with pieces of other worlds besides Theia.

Jules Verne wasn’t dreaming after all. We need to focus more attention to a journey to the center of the Earth.

The Mysterious Moodus Noises of Connecticut