Jupiter’s Great Red Spot (GRS) is a gigantic storm that has been around for at least 150 years and perhaps the reason why it has lasted so long is because of its cannibalistic nature.

GRS is massive as it is approximately twice as wide as Earth and has winds that can reach 425 miles per hour (684 kilometers per hour). However, it has been getting smaller over the years – it’s only about half the size it was at the end of the 19th century. That’s why scientists were worried that the storm may have been dying off but it’s not finished yet as experts found that it eats up smaller cyclones (but still massive as they’re about 10 times larger than Earth’s hurricanes) that get in its way which seemingly provides GRS the energy boost it needs to keep surviving.

It’s still unclear as to how the storm first developed and why it has lasted so long, but the fact that Jupiter doesn’t have any solid ground underneath its 44 miles of cloud cover (or 71 kilometers) may have something to do with it. When hurricanes develop here on Earth, they weaken once they reach land, but that can’t happen on Jupiter. Since GRS is eating up other storms, it should be around for many more years to come. 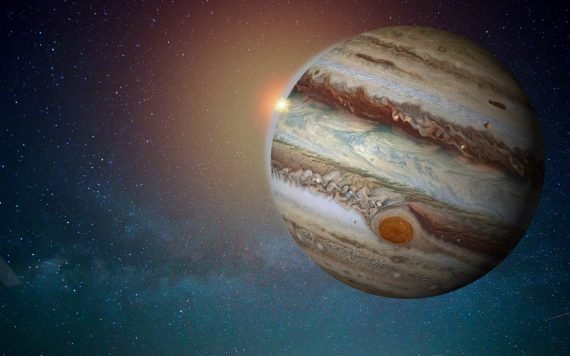 The research was published in the Journal of Geophysical Research: Planets where it can be read in full.

In other Jupiter news, a new study conducted by astronomers at the Laboratoire d'Astrophysique de Bordeaux revealed that winds between the layers of clouds on the Gas Giant can get as strong as 900 miles per hour (1,448 kilometers per hour) – over three times more powerful than the strongest tornadoes here on Earth. The massive winds can create storms that are wider than our planet and up to 560 miles in height (901 kilometers).

Dr. Thibault Cavalié explained this further, “The most spectacular result is the presence of strong jets, with speeds of up to 400 meters per second, which are located under the aurorae near the poles.” “These wind speeds, equivalent to about 900mph, are more than twice the maximum storm speeds reached in Jupiter's Great Red Spot and over three times the wind speed measured on Earth's strongest tornadoes.”

They were able to determine the wind speeds by using the Atacama Large Millimeter/Submillimeter Array (ALMA) in Chile which measured the Doppler shift (small changes in the radiation frequency released by the molecules) that is caused by wind speeds. Incredibly, it didn’t even take 30 minutes for ALMA to calculate the jaw-dropping wind speeds.

Their research was published in the journal Astronomy & Astrophysics where it can be read in full.