If you’ve ever rolled out of bed before dawn – or rolled home at that time – and were surprised to see the sky lit up in a strange way without any hint of the sun creeping up over the horizon, you were most likely witnessing an appropriately named phenomena known as a “false dawn.” If the light looks triangular, you’re not hallucinating (OK, you might be, but that’s your problem) – that’s the shape it takes. And if you’re afraid to tell anyone else because they might think you’re crazy, they probably already do – but you’re in good company … the ‘false dawn’ has been reported pre-Columbian Mesoamericans, astronomers as early as the 1600s and even the prophet Muhammed. They all asked the same question you probably did: “What IS that?” Good news – unlike them, you’re about to find out … and it’s not of this Earth.

“The Zodiacal light is sunlight reflected by dust in the inner solar system. Variations in the Zodiacal light with ecliptic latitude reveal discrete bands of dust orbiting near the ecliptic plane. The Juno spacecraft, in transit from earth to Jupiter, recorded a sufficient number of impacts with this dust to characterize their distribution in space for the first time.”

In a new study published in the journal Geophysical Research Letters, Danish astronomers led by Professor John Leif Jørgensen from the Technical University of Denmark dug deeper into photographs taken in 2016 by advanced Danish cameras onboard the Juno spacecraft as it approached Jupiter. That’s when Juno unexpectedly encountered a dust storm which was invisible to the cameras but hit Juno with such force that they knocked particles off of the surface of the craft. And not just a few – a count by Jørgensen’s team found at least 23,000 small pieces.

The dust itself was not a surprise – there is an elliptical plane of dust throughout the solar system, as the study notes. And it has been speculated that the ‘false dawn’ phenomena – called Zodiacal light by astronomers – was caused by this dust reflecting sunlight. However, Juno gave the astronomers the first chance to identify where the dust came from – and the answer shocked them

“The radial distribution of the dust suggests a primary source of dust with the orbital elements (inclination and eccentricity) of Mars, scattered into a secondary population at higher inclination to the ecliptic.”

Up until now, astronomers speculated that this dust came from asteroids and comets traveling through the solar system. In fact, the cameras were on Juno to look at asteroids, not dust. Once they knew what it was, they realized the distribution matched the dust around Mars – another planetary mystery, as dust can’t escape the gravitational field of Earth because the atmosphere traps it. Mars has a thin, dry atmosphere and its gravitational field is very weak, but the team can’t explain how so much of its dust escapes – especially to Earth where it helps create false dawns in the spring in the Northern Hemisphere and in the late fall in the Southern Hemisphere. 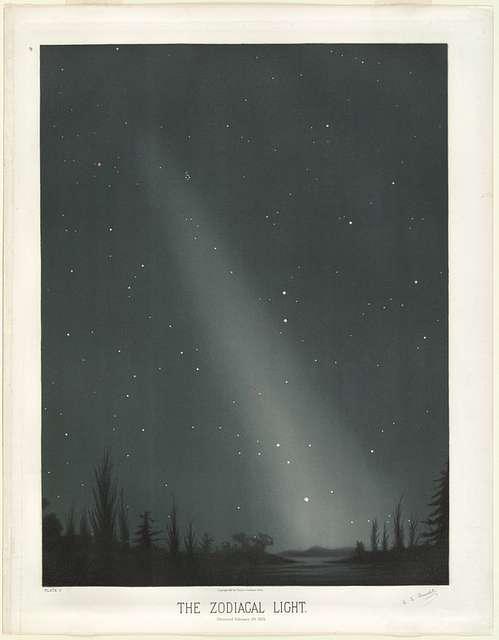 “The IDP environment recorded by Juno on its journey to Jupiter has potentially significant implications for the design and qualification of space flight hardware as well as mission design.”

While the ‘false dawn’ discovery was interesting, the team was concerned about the impact of the interplanetary dust particles (IDP) from Mars on Juno – the reason why they could see it. Juno was solar-powered, but its solar array was strong enough to survive the impacts. Next generation solar-powered deep space crafts will have ultra‐thin, flexible solar arrays. Will they survive?

There’s something to ponder during your next false dawn.

The Weird Case of Tina Resch and the Poltergeists