Following several reports that a river monster was witnessed lurking below the frozen water, the Rideau Canal Skateway was closed down on February 22nd. Located in Ottawa, Ontario, Canada, the 7.8 kilometer (4.8 miles) skating rink is known as the largest in the world.

According to the reports, a big scaly monster broke through the ice. Froy Zonn, who is a second-year bioengineering student and who decided to go skating late at night, described what happened, “I was just minding my own business when the ice started rumbling. I thought it was my stomach for a minute — I just had shawarma.” “I wasn’t sure if I was just zonked but I saw a huge dark figure swim beneath me under the ice. I got so scared that I hopped off and walked like 20 minutes home.”

And Zonn wasn’t the only skater who witnessed the alleged monster as Ottawa Police confirmed that they received around half a dozen calls regarding the same thing. While at first they refused to investigate because “monsters aren’t our jurisdiction”, they will work with animal control in order to figure out what these witnesses actually saw.

Di Daniels, who is a fourth-year Greek and Roman studies student, believes that the witnesses encountered the canal monster, “They’re like the Loch Ness monster, but actually deadly.” “A lot of locals refer to it as ‘Maple’ because it’s the most Canadian pet name kids can think of.” “People are just overreacting — Maple hasn’t hurt anyone in maybe a year. As long as you don’t go skating too late or litter the river, you’ll survive … probably.”

While other reports have stated that the skateway was closed due to warmer weather, you can’t help but notice the coincidence that a “monster” was spotted just before it was shut down.

Those weren’t the first reports of a sea monster lurking in the waters around Ottawa. The legend of the Ottawa River Sea Serpent dates back many years. Along the Ottawa River close to Arnprior, Ontario, the water widens up and is called Chats Lake. Back in the middle to late 1800s, the area saw a lot of timber and logging transportation with steamships carrying workers and supplies. It was during that time that several people claimed to have seen a gigantic serpentine creature in the waters of Chats Lake. 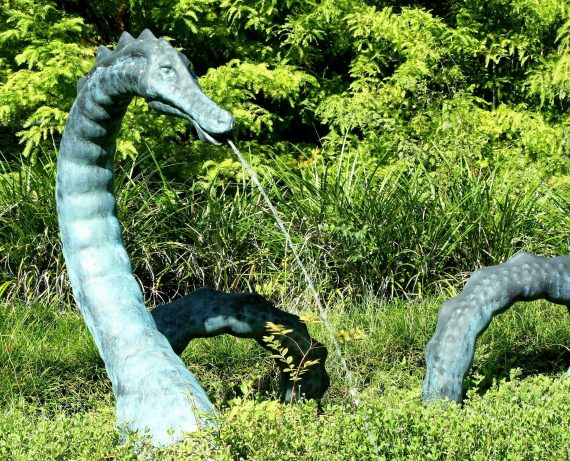 A newspaper article written in 1880 reported that a boy in a canoe witnessed the serpentine creature and described it as being “about the size of an ordinary telegraph pole.”

Then in the summer of 1882, a report in the Arnprior Chronicle stated that the sea serpent had been captured by crew members of the steamship Levi Young. After the crew killed the creature with an oar, they brought its body onto the ship and described it as being 11 feet in length and over a foot thick with its jaw opening up to about half a foot wide. Oddly enough, nobody knows whatever happened to the carcass. And so, the mystery of the Ottawa River Sea Serpent continues...