Deep beneath the Pacific Ocean lies a never-before-seen type of rock that formed millions of years ago from exceptionally hot volcanic activity. While basalt is a common type of volcanic rock, the new specimen has never before been detected.

When researchers drilled deep into the floor of the Pacific Ocean southwest of Japan – about 3.7 miles in depth (6 kilometers) – they collected samples from almost a mile into the floor (1.5 kilometers) and that’s where they discovered the new type of basalt with never-before-seen mineral and chemical compositions.

In a Leeds University statement, researcher Ivan Savov explained how unique these rocks actually are, “The rocks that we recovered are distinctly different to rocks of this type that we already know about. In fact, they may be as different to Earth's known ocean floor basalts as Earth's basalts are to the moon's basalts.”

As for what created this new type of basalt, experts believe that it was caused by the early formation of the Ring of Fire which is a horseshoe-shaped area along the Pacific that has numerous active volcanoes (such as Mount St. Helens and Krakatoa) as well as frequent earthquakes. It is thought that the Ring of Fire became active at least 50 million years ago.

Also known as the Circum-Pacific Belt, it measures about 40,000 kilometers in length (24,855 miles) along numerous tectonic plates that includes the Pacific, Juan de Fuca, Cocos, Indian-Australian, Nazca, North American, and Philippine Plates. Incredibly, over 450 volcanoes are located along the Ring of Fire – these make up about 75% of all volcanoes on Earth. And 90% of our planet’s earthquakes occur there as well and they include some of the fiercest quakes.

According to their research, experts have suggested that volcanic activity caused by the Ring of Fire was much more intense than they had suspected, “The discovery suggests that ocean floor eruptions sourced in the Earth's mantle were even hotter and more voluminous than previously thought,” Leeds University noted. And this is why a never-before-seen type of basalt was formed there. 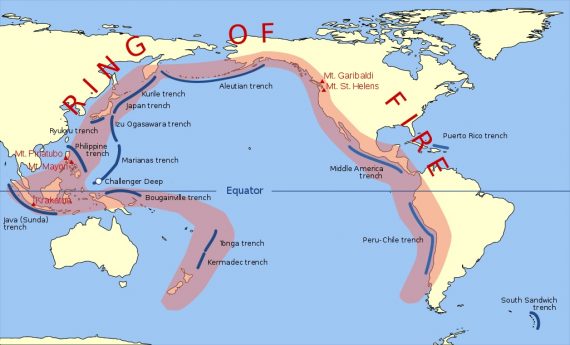 By discovering this new type of basalt, experts will hopefully be able to learn more about how rocks are formed as well as the violent volcanic eruptions that occurred on the ocean’s floor. “Now that we know where and how this rock type is formed, we anticipate that many other rocks that we know were originally formed by ocean floor eruptions will be re-examined and potentially alter our wider understanding of the basalt formation,” Savov stated.

This also proves that you don’t have to leave Earth to make incredible findings, “In an era when we rightly admire discoveries made through space exploration, our findings show there are still many discoveries still to make on our own planet,” he added.