“Possession is nine-tenths of the law”

If you believe that old adage and you’re a lawyer who can defend it in court, the people who run Stonehenge (the English Heritage Trust) may want to talk to you. A group of Welsh nationalists and the owner of a Welsh tourist attraction want British Prime Minister Boris Johnson to return Stonehenge to Wales, where the bluestones were cut from a quarry 5,000 years ago and staged prior to it being relocated to Salisbury Plain, where it stands today. If Johnson refuses, the group will demand “a few million pounds” as compensation. Do they have a claim? Can England claim “possession is nine-tenths of the law”? Doesn’t Boris Johnson have enough problems to deal with? Can he dump this one on the royal family?

“There have always been claims that the stones of Stonehenge originated from the Preseli. A recent study published in the Antiquity journal claims that that the stones originally stood as a stone circle at the Waun Mawn circle and at some point were dismantled and transported to Salisbury. The circumstances of this removal are impossible to determine therefore it would be prudent that they should be returned to their original location.

That petition, created by Welsh nationalist Iwan ap Dafydd, is addressed to the People of Wales and asks them to sign up and pressure England to return Stonehenge assembled to Pembrokeshire, where the Preseli Mountains and their bluestone quarries are located. He’s referring to new studies which not only trace the bluestones to Preseli, but suggest that holes in Waun Mawn in Preseli once held a mini-Stonehenge circle that disappeared around 3000 BCE – the same time other experts say Stonehenge was being built in the Salisbury Plain. Coincidence?

“Greece is trying to reclaim the Elgin Marbles. What if Wales tries reclaiming Stonehenge? They can re-erect it here, in Cardigan Island Coastal Farm Park, Gwbert, from where we can view the Preseli Hills in the distance.” 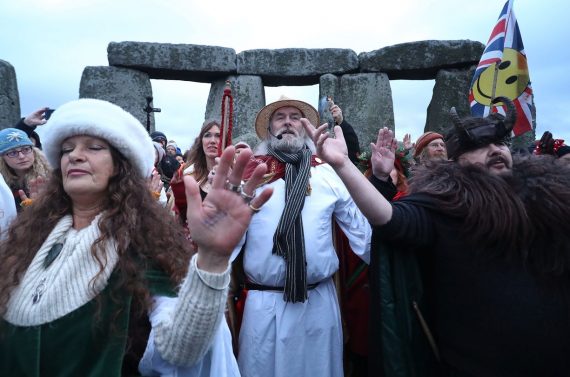 While Iwan ap Dafydd is a Welsh nationalist, Lyn Jenkins is a capitalist and (no surprise here) owner of the Cardigan Island Coastal Farm Park. While not greedy enough to demand that Stonehenge be rebuilt in his car park so he can charge admission, he could easily put up a tickets-only viewing stand or pay telescopes for “looks at Stonehenge.” In The Mirror, he cites the case of Greece, which is trying to get the Elgin Marbles – classical Greek sculptures taken from the Parthenon – back from the British Museum, where possession is nine-tenths of the law. Egypt has fought for its stolen artifacts against that long-accepted maxim as well, which dates back to the 16th century, possibly from Scotland. It was used in the U.S. in the infamous Hatfield-McCoy feud when Floyd Hatfield retained possession of the pig that the McCoys claimed was their property. That one did not end well. Will the Welsh demand for Stonehenge fare any better?

"If not, why doesn’t Mark Drakeford send Boris Johnson a bill for a few million pounds? After all, Stonehenge is an extremely lucrative tourist attraction."

Jenkins gives PM Boris Johnson an out – pay a few million pounds to the First Minister of Wales instead for stones that spent far longer in Wales than they have in England.

Who will win? Is possession nine-tenths of the law? Does Wales have a claim to Stonehenge?

Perhaps the best solution is the Las Vegas one – build a replica, add a casino and make everyone happy.

The Bizarre Case of “The Strangest Woman in the World”