Strange and Supernatural “Giants” in the U.K.

Today's article is on a subject that you may not know too much about - primarily because the subject doesn't have the coverage that it really should. The topic: strange, giant humanoids in the U.K. Certainly one of the most bizarre of all the cases that falls into the domain of this particular category dates from 1789 and is referenced in an old document that came from the private collection of a noted family of landowners in Cornwall, England. The details are unfortunately very scant indeed, but, nevertheless, of deep significance, given what we have read thus far, and what is still yet to come. It concerned an immense monkey-like creature seen on several occasions at Crowlas, near Penzance, England. The creature was seen by local folk late at night, on at least three occasions, and was described as being around eight feet in height and made a strange whistling noise that was interpreted as a call - to who or what, mercifully, remains unknown. Most notable of all: when the creature was last seen, at the height of a violent thunderstorm, it literally disappeared in an almighty flash of light. 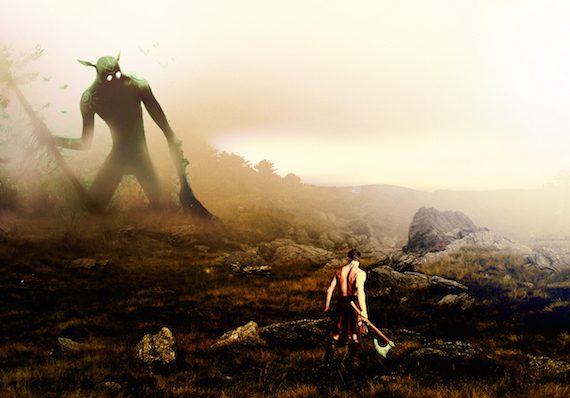 Olly Lewis, of the U.K.'s Center for Fortean Zoology, has revealed that long, long ago, villagers and shepherds in the area of Nant Gwynant, Wales were plagued by a silent and stealthy thief who would break into their homesteads under the protective covers of shadow and darkness on a disturbingly regular basis. Those same villagers and shepherds would awaken to find that their goats and cows had been inexplicably milked, much-needed food was stolen, and a number of sheep were taken during the night, never to be seen again, their unfortunate fates surely sealed. The carnage and thievery, says Oll, "went on for some years and every time anyone laid a trap for the thief it never took the bait and the finger of popular suspicion passed from ne’er-d’-well to ne’er-d’-well, with each suspect’s guilt eventually being disproved."

So, what – allegedly, at least – was the true nature of the nightmarish beast said to have been roaming the densely-treed, ancient valley? According to North Wales-based legend it was a creature of undeniably primitive proportions and terrifying appearance, one that seemed intent on tormenting the people of the picturesque area whenever, and however, possible, as Oll notes: "One day a shepherd was returning from the mountains later than usual and spotted something strange; a huge, burly naked man covered from head to toe in thick red fur was resting on a neighboring hill. The shepherd suspected that this out of place and strangely hirsute giant might be the thief that was plaguing the village, so the shepherd snuck past the man without being detected and ran back to the village as soon as he was out of sight." Moving on...

As Fortean researcher Andy Roberts notes: "In 1791 poet James Hogg, known as the Ettrick Shepherd, described seeing a huge figure on Ben Macdhui whilst tending his sheep." As he watched the halo which had formed around him due to the combination of sunshine and mist he suddenly noticed a huge, looming figure. It was vaguely human in shape and he imagined it to be the devil. Hogg fled in terror, not stopping until he reached fellow shepherds. The next day he saw the same figure under similar climatic conditions." Hogg dramatically described the eerie experience himself, and, fortunately, his report still exists and is available for scrutiny: "It was at least thirty feet high and equally proportioned, and very near me. I was actually struck powerless with astonishment and terror. My first resolution was, if I could keep the power of my limbs, to run home and hide myself below the blankets with the Bible beneath my head."

Instead of fleeing, however, Hogg stood firmly his ground, fully determined to trace the source of the figure. Cold fear gave way to utter astonishment, however, when he removed his hat and found the strange entity mimicking both this and all his subsequent actions. Hogg, trying to rationalize the experience, came to believe that the affair could be explained by an uncommon natural phenomenon known as the "Brocken Spectre." While there might be many and varied reasons why the U.K. has a longstanding history of giants in its midst, the one thing we can say for sure is this: supernatural or something else entirely different, the U.K. has huge "things" roaming around the woods, forests, hills and mountains.

4.6-Billion-Year-Old Meteorite Came From a Protoplanet in Our Solar System