Sitting atop a hill overlooking the city of Darmstadt in the Rhine Valley within the rugged Odenwald mountain range of Germany like something out of a dark fairy tale is the real Frankenstein Castle. The name “Frankenstein” itself comes from the Franks, which was an ancient Germanic tribe, and the German word for "stone," which is “stein,” forming the name “Stone of the Franks.” The sprawling, gothic structure was originally built in 1250 by Lord Conrad II Reiz of Breuberg, who later changed his own name to Frankenstein and started the free imperial Barony of Frankenstein. Over the years it would be expanded and change hands several times before finally becoming a refuge and a hospital, before being abandoned and falling to ruin in the 18th century. Over its many centuries the castle has accrued various spooky stories and legends, imbuing it with strange and dark lore, and it has also said to have been the inspiration for Mary Shelley's 1818 gothic masterpiece Frankenstein.

In 1814, Mary Shelly passed by this place during a trip, and it is thought that its eerie ambiance and legends might have influenced her later work. There are certainly plenty of creepy stories to be had orbiting the place. One of the more well-known stories surrounding Frankenstein Castle is that of the man called Johann Konrad Dippel, who was born at the castle in 1673. Dippel became known as a powerful alchemist, and one of the concoctions he came up with was what he claimed to be the “elixir of life,” supposedly made from a noxious dark mixture of animal oils, crushed bones and horns, blood, leather and ivory, which allegedly could greatly expand the human lifespan and possibly allow one to live forever. He purportedly tried to use this elixir as payment for the castle at one point, which was turned down. Dippel was also rumored to do macabre secret experiments on dead bodied he stole from graveyards for the purpose of trying to bring them back to life. He was even said to have been successful, creating and abomination fashioned from corpses that he brought to life with a bolt of lightning. It is easy to see why Dippel, like the castle itself, is thought to be one of the inspirations for Mary Shelley's Frankenstein. The monster was said to have escaped and roamed the countryside, with some saying it is still out there to this day. It is not known if this tale really influenced the author or the other way around, but it is certainly an interesting bit of lore.

Another popular legend from here is that of a dragon that once lived in a well near the castle in the 1200s. The people of the region lived in great fear of the dragon, cowering in their homes whenever it was on the move, and this lasted for quite some time before Lord George of Frankenstein decided to take it upon himself to engage the beast in battle. The two went to battle atop a hill and according to the tale fought for hours until they were both weary from exhaustion. George was finally able to slay the dragon, but as it died it purportedly stung the valiant warrior with a poison barb and dragged him over the edge of a cliff with it as it fell. The thankful villagers then brought him to the Church of the nearby village of Nieder Beerbach, tucked away in a valley just to the east of the castle, where they buried him in a grand tomb. Whether any of this fantastical story is true in any sense or not, the tomb of Lord George exists to this day and can be visited.

Besides mad alchemists, monsters, and dragon killing warriors, there are other mysteries and tales from the castle as well. One is an area of remote forest up on nearby Mount Ilbes, in which compasses and some electric equipment won’t work due to magnetic disturbances emanating from stone formations, or perhaps paranormal forces. The lore has it that this area was frequently used by witches for dark rituals, and by some accounts still is. There is also supposedly a real fountain of youth hidden on the castle grounds, which could restore youth and vigor to even the oldest and feeblest person. There is also a vast treasure said to be buried near the castle, which has been the target of treasure hunters since the 1700s. 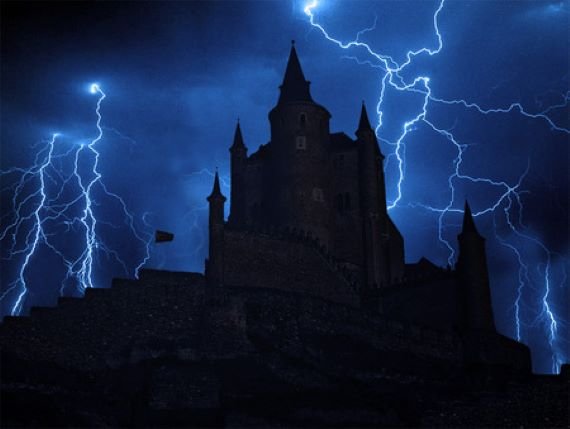 Of course, what spooky castle worth its salt wouldn’t be complete without its own contingent of ghosts? There have long been said to be all manner of specters and paranormal phenomena at the castle, and it was famously investigated by the SyFy TV-Show Ghost Hunters International in 2008. The team heard anomalous noises and managed to record EVP of ghostly voices saying in Old German “Arbo is here” and “come here.” At the end of their investigation they came to the conclusion that Frankenstein Castle demonstrated “significant paranormal activity.” Frankenstein Castle is now home to one of the largest annual Halloween parties in Germany, started by American airmen at nearby Rhine-Main Air Base in 1978, and it also has modest tourist facilities year-round, including a restaurant, tours, and a wedding chapel, so go check it out. Who knows? Maybe you’ll find that treasure or the fountain of youth, and whether Shelley drew inspiration from here or not, at least you can experience the history and spooky ambiance of this imposing historical place.

When “Alien Abductees” are Secretly Followed, Watched and Much More