Strange Mysteries of a Lost Tomb in Egypt

Located on the west bank of the Nile River of Egypt, just opposite the city of Luxor, is a dusty valley called the Valley of the Kings, also referred to as the Valley of the Gates of the Kings. While at first glance it may seem to be merely a stretch of arid desolation, it is home to a great necropolis of ancient tombs that served as the burial sites for numerous pharaohs and nobles between the 16th to 11th century BC, the most famous being the tomb of King Tutankhamun. The Valley of the Kings contains 64 known tombs and chambers of various shapes and sizes, and there are more thought to still be out there, making it a treasure trove of information on ancient Egypt beliefs and funerary practices, as well as archeological artifacts. It is also a place of deep mysteries, and one of the newer tombs to be found here has proven to be quite puzzling, indeed.

In 2005, a team of U.S. archaeologists from the University of Memphis led by a Dr. Otto Schaden was excavating the ruins of 19th dynasty workmen's huts at the entrance to a tomb called KV10. As they continued their dig under the hot desert sun, they quite by accident discovered a previously unknown vertical shaft that led straight down into the perpetual darkness below. It was a rather odd finding, as the huts had been investigated in the past without anyone ever making mention of the shaft, meaning they had somehow missed it. The team immediately knew that this was something special, that they were onto something new, but were forced to put off delving further into the mystery because the digging season was coming to an end.

When the excavation resumed, the team was able to follow the shaft 5 meters down into the earth to a massive door made of stone blocks, which at the time seemed to have never been opened and which was thought to hold a new tomb beyond. It was truly exciting at the time, as this was to be the first new tomb found in the Valley since the historic discovery of the tomb of Tutankhamun in 1922, so when the door was opened the team was filled with wonder as to what lie beyond it. What they found would be just as mysterious as anything they could have imagined.

When the door to what had been christened KV63 was finally opened, it was found to lead into a plain limestone chamber measuring four meters by five, with plain white wall markings. Within the simple room were found 28 enormous storage jars with clay seal impressions and seven coffins, one of them seeming to be child-sized. Amazingly, the coffins and jars were found to be completely sealed, a rarity in the Valley of the Kings, as most tombs that had been discovered in modern times had long ago been opened and robbed in antiquity. Some of these mysterious coffins had yellow funerary masks upon them, while others had black funerary masks, as well as some inscriptions, including the name used by Tutankhamun's wife, Ankhesenamun. Indeed, this, plus the architectural style and bits of text found suggested that the chamber was contemporary with the time of Tutankhamun. This was an incredible find, with much speculation to who these coffins contained and what their significance was, so when the coffins were opened it was a major event that they even televised. Yet, they were not expecting what they would find within. 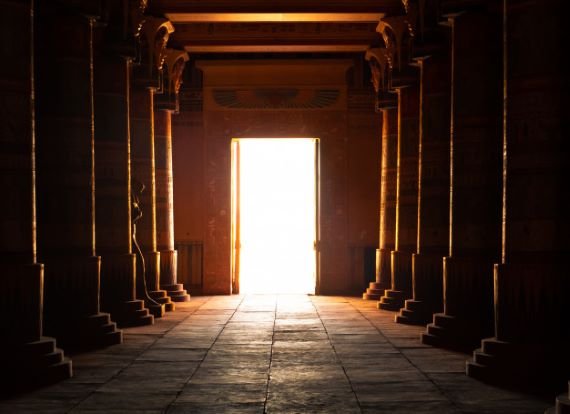 When the coffins were opened, they were found to not contain any human bodies at all. Instead, they held within in them an eclectic mix of mummification gear, including pieces of broken pottery, rocks, mud seals, salts, linens, wood, and a powder used for drying corpses, called natron. One of the coffins contained the impression of a body on the bottom but no remains, and the child-sized coffin contained within it another, smaller coffin covered with pink gold leaf, as well as five pillows. What was the meaning of all of this? A look at all of the jars showed that they contained a hodgepodge of stuff, such as natron, wood, seeds, shells, carbon, assorted pottery, small animal bones, papyrus fragments, mud trays, mud seals, and pieces of twine or rope. However, they had all been very carefully sealed and placed, and the placement of the coffins and care with which they had also been sealed indicated that this wasn’t simply a dump for miscellaneous junk. There was a deliberate purpose to all of this, but what? At the time no one had a clue.

Several theories were tossed about. One was that this had been a staged, fake burial in order to thwart grave robbers, which is pretty curious as it is one of the only tombs ever found in the valley to have actually not been looted. Another is that it was perhaps an embalming studio and storage cache, likely used by Tutankhamun's own family embalmers for his burial sometime around between 1337 to 1334 BC. However, this is all speculation, and the fact is no one is really sure what the purpose of this tomb was, or why any of these materials should be placed in coffins and so meticulously sealed and decorated. What was the meaning of this place and why was it so carefully sealed and adorned with these jars and coffins with no bodies? No one knows for sure, and it remains just one more mystery of ancient Egypt lost to the mists of time.

When Certain Scientists Dropped Suspiciously: Years of Mystery and Intrigue