The Bizarre Case of “The Strangest Woman in the World”

Throughout history there have been those people who seem to have powers and abilities beyond our understanding. These are the individuals who hold within them mysterious forces or characteristics which have propelled them past the point of being mere normal humans. Such cases have served to inspire wonder and awe, the answers usually not clear as to how they managed their feats. One case that truly sits high among these is that of a woman who was famous for being impervious to pain, poison, disease, and with what seems to have been an accelerated healing ability, a woman who has earned her place among historical superpowered individuals.

The woman originally known as Eva Kennedy was born in 1871 on the Island of Trinidad in the West Indies, and spent her younger years in the country of Cuba. In her first few years of life, she was considered to be completely normal, doing the normal things kids do and playing with not a care in the world, but at the age of 4 her strange talents would finally be discovered. It was at this age that she was out one day and was bitten by a very venomous snake called a fer-de-lance, widely considered to be one of the most dangerous snakes in the world. At the time, to be bitten by one was nearly a death sentence, with one expecting to lose a limb at the very least, but little Eva would surprise everyone when she suffered absolutely no ill-effects at all. Although the girl said the bite had surprised her, doctors were astounded that the venom had had no effect on her, and that she was mostly unfazed by a bite that would have very likely killed a grown man several times her size. It was considered a bit of a miracle.

As she grew older, Eva realized that her whole view of physical reality was different from others. She came to the realization that other people felt pain from injuries, something that was an alien concept to her as she felt none, and she could not remember ever having had such a sensation. She could see that even holding her hand to an open flame produced no sensation of pain, so she began experimenting on herself. She drove needles into and through her flesh, pricked and cut herself with knives, and even went about letting venomous snakes and spiders bite her, but none of this gave her any pain or symptoms, with the venom having no effect upon her at all. She would in later years say of her imperviousness to pain:

Some people think that I am unfortunate. I think that I am very much blessed. I have never had a sick day in my life. I never had a pain in my life; I don't know what an ache is. I am always happy, never sad. I do not know what pain is, and I wouldn’t be subject to it for anything in the world. I cannot see the use of pain anyway. It seems to me that I get through life as well as any person. All of the nerves that give real pleasure are left to me. Why should I care for those which give pain?

Indeed, she would also claim that her sense of touch in general was barely existent, and that she relied on her other sharpened senses to help her get through everyday life. Her family would eventually move to America, and her strange abilities began to capture interest, to the point that as soon as she was old enough, she decided to make it into an act. She took on the stage name Evatima Tardo, and began her career of ever-escalating wild stunts. At first, her main act was to be bitten by various venomous creatures. Eva would allow herself to be bitten by snakes, spiders, centipedes, and gila monsters, pretty much any venomous creature known to man, taking in enough venom in these performances to kill several men many times over, but it did nothing to her. She was always unfazed no matter how many times she was bitten, seemingly immune to any known venom. This made her very famous to the awe-struck crowds who gathered around her, but she decided to take it all even further into the weird. 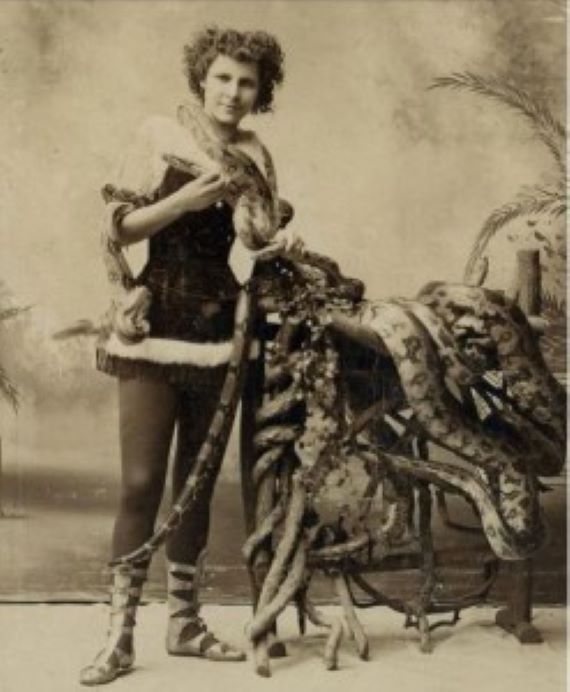 Eva began taking her act up a notch, graduating beyond merely being bitten by venomous creatures and expanding her repertoire to capitalize on her seeming immunity to pain. She would pass long needles or spikes through her flesh without so much as a wince, allow herself to be poked with red hot irons, and even allow herself to be shot, none of it physically registering for her. Not only that, but the bleeding would always stop nearly immediately, the wounds healing with a preternatural swiftness that no one could explain. She was all over the news, with people calling her “The Strangest Woman in the World,” her fame growing day by day. Far from only performing for paying audiences, Eva also let herself be subjected to demonstrations by scientists and physicians, and there was no obvious explanation for it all. This all caught the attention of the renowned magician Harry Houdini himself, who was well known for debunking claims such as this, but who in 1897 came away from Eva’s performances baffled and convinced, remarking:

For the simple reason that I worked within 12 feet from her, my statement that there was absolutely no fake attached to her startling performance can be taken in all seriousness.

One of Eva’s most remarkable feats was allowing herself to actually be crucified. Stage assistants actually went about nailing her to a giant cross, where she hung and smiled and giggled at the audience. She even let audience members come up to touch the nails and her flesh to be sure that it wasn’t an illusion, the astounded people having no idea how she did it. Eva would recall of these performances and people’s reactions:

I rather enjoy being crucified. It amuses me to see the horror-stricken countenances of my auditors. There are upwards of ten faints to each seance, but they never fail to return again to see me.

Doctors who examined her at the time came to many conclusions. One was that her nervous system operated differently from others, that her nerves had somehow been severed or that her pain receptors were underdeveloped or nonexistent. She may also have had a genetic mutation, which would have been beyond the knowledge of medical professionals at the time. This still wouldn’t explain her resistance to all manner of venoms or her ability to heal so quickly, or why she bled so little, and it certainly did not explain her resistance to disease. Eva also supposedly would subject herself to all manner of diseases and contagions with no ill effects. One newspaper report of the time has said of her remarkable immunity to disease, pain, and injury:

But the immunity from all forms of poison and contagion is even more remarkable. Physicians have taken their deadliest cultures and placed them in her blood. Cholera germs, diphtheria, consumption, typhoid fever, all the dreadful list, have attacked this woman and she was not in the slightest effected. Miss Tardo is not only free from all pain but she has absolute control over the circulation of her blood. A gash can be made where there is no way for a surgeon to stop the flow of blood. This young woman can stop it in a second and then permit it to flow again. And there doesn’t seem to be any explanation at all for this. It is simply a fact. Many scientific men have said that if Miss Tardo’s arm were cut off she could join the severed part and it would become hard and fast again, leaving not a scar. Every scientific man who has studied her has said that she will never die of disease or violence. Her end can only come when the whole machine is worn out unless, indeed, she were chopped up into bits. 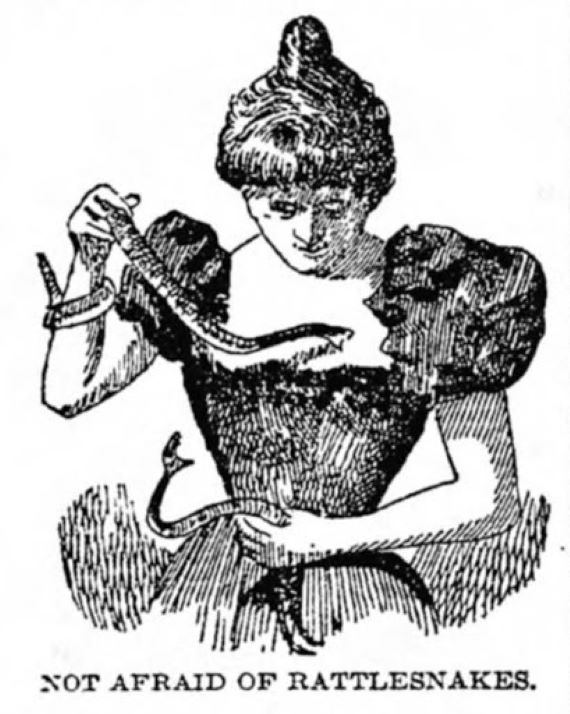 There were of course many skeptics who looked upon all of this. There was the idea that she was using some potent painkiller, possibly even cocaine, or perhaps a combination of this and some sort of hypnosis. Yet this still does not explain her immunity to venom from the numerous snakes that bit her, her ability to stop bleeding and heal, nor why no medical professional could derive the source of her mysterious powers. One write up in The Pacific Coast Journal of Homeopathy would say of her:

She spends some twenty minutes in silent preparation before performing her feats, and this leads one to suspect the possibility of cocainization being the cause of her lack of sensibility, or perhaps that hers is a case of auto-hypnotization. But what has rendered her immune to rattlesnake poison, for she surely allows herself to be bitten by a Crotalus horridus [timber or canebrake rattlesnake], is a question still unsettled. Is she a disciple of Calmette, the Frenchman, who has been experimenting for years in India, and has demonstrated satisfactorily that one can be rendered immune to all virulent snake poisons by increasing doses of cobra poison and hypochlorite of lime in solution injected hypodermically? Again, many appear to believe that the little woman in question is a freak of nature, and that her sensory nerves are lacking in development.

It is tragic that she did not survive long enough for it to ever be answered. In may of 1905, Eva was drinking at a saloon near where she lived with a man named Hal Williamson, and she was being watched by a secret admirer. A railroad special agent and former lover of Eva named Thomas McCall had been enamored with her for some time, but had learned that she was now seeing Williamson. In a drunken fit of jealous rage, McCall confronted the pair and shot them both dead before turning the gun on himself. Unfortunately, Eva's gifts could not save her this time. It was a tragic turn of events, widely covered in the news at the time, and making it even worse is that Eva had taken any secrets she had within her body to the grave with her. Eva was never exposed as a fraud of any kind, and she was indeed seen as an exceptional person in many respects. What were her secrets? How could she do what she did? We may never know for sure.

A Student of Einstein, Dead Aliens, and a “High Order of Classification”