The Bizarre Life of the “Half-Ape” Julia Pastrana

Back in the 19th century, travelling circuses and sideshows were all the rage. Wherever they went they drew great crowds lining up to see things from beyond their understanding, with at one point these shows being the most popular form of entertainment there was. In the background, behind all of the sensationalist claims and barking at customers to come in there was often a very colorful cast of characters with their own strange lives and backstories. One that especially resonates is that of a woman who was held up as some sort of missing link or subspecies of human, who nevertheless took in stride her role in life, and continued her show even after death.

The early life of the woman known as Julia Pastrana is so imbued with sensationalism and obscured by her larger-than-life engineered stage persona that it remains rather murky and mysterious, with it difficult to disentangle fact from fiction. It is known that she was born in 1834 somewhere in the state of Sinaloa, Mexico, and that she was from an indigenous tribe. It is also known that she was afflicted with several genetic conditions that had caused various physical anomalies such as a body and face covered with straight black hair, with only the palms of the hands and soles of the feet left bare, thickened lips and gums, an unusually large nose and ears, and oversized, irregular teeth. The whole effect gave her a rather animalistic, ape-like primitive look that turned heads everywhere she went and made her a prime target for freak show promoters of the era looking for just such bizarre individuals, but it is not clear exactly how her early life played out or how she ended up being a part of a sideshow.

One story is that she was found feral and living in a cave and given to an orphanage, where she was adopted by Pedro Sanchez, the then-governor of Sinaloa, to be his maid, and was eventually discovered by the circus or sold to it. In another she was rescued after being found half-dead in the forest after a brutal attack and adopted by the governor. A more popular tale was that she was a village girl called the “Wolf Woman,” and when her mother died she was sold to the circus by her own uncle. In most versions she spent time with the governor as a servant, and in 1854 left after being recruited or bought by a circus performer and brought to the United States, where she was put on display on Broadway by promoter J.W. Beach as “The Marvelous Hybrid,” or also “The Bear Woman,” until falling under the management of another showman, Theodore Lent, who she would actually marry, and from there her career would really take off.

Lent would take Julia on tour all over the US and Europe, including the Queen’s Hall in London, at the same time crafting an elaborate fake history for her. She was often claimed to be from an unknown mysterious Mexican tribe called the “Root Diggers,” who were hunter-gatherer hybrids between man and ape. Depending on the venue, Julia would be introduced under a variety of shockingly insensitive and racist names, including the "Baboon Lady,” the "Dog-faced Woman," the "Hairy Woman," the "Ape-faced Woman,” the "Ape Woman," the "Bear Woman," and "The Nondescript," among others. The crowds would be held in awe by her distinctly ape-like appearance, and were further amazed that for all of her animalistic traits, Julia talked, danced and sang with elegance, and always showed a great intelligence, wit, and charm which clashed with her fierce appearance. She was once described as “sociable and polite, and, besides being undoubtedly the greatest living curiosity, she is a lady in every respect. She was substantially human: she spoke several languages, sang, danced, was lively and intelligent.”

Julia would become one of the most popular circus performers there was in an era when some such people achieved massive celebrity status, and in the meantime she was not only awing audiences, but also was attracting the attention of scientists, doctors and naturalists who were just as baffled as anyone else. In particular, the naturalists Alfred Wallace and Charles Darwin were fascinated by her, with Darwin even speculating that she could be some type of missing link on his theoretical evolutionary scale of humans and apes. This of course was used by promoters to advertise her as “Proof of Darwin’s Theory.” Julia was frequently poked, prodded and examined by doctors, many of which truly believed her to be a fusion of human and animal, with one doctor Alexander B. Mott, M.D., proclaiming her to be a human-orangutan hybrid, while others believed her to be a new species of human. Only a few correctly surmised that she had some sort of disease or physical deformity, but at the time medical knowledge was not what it is today, and so these examinations and erroneous sensational statements by doctors and professionals only fueled Julia’s mystery. 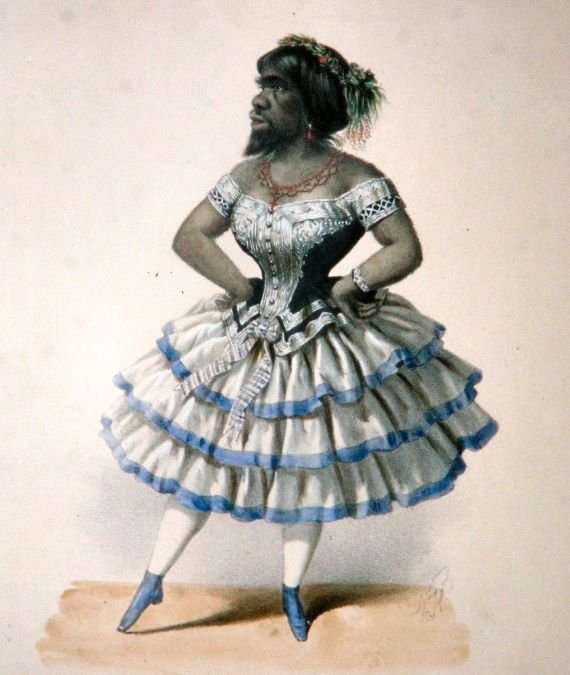 In 1860, during a tour of Moscow, Julia gave birth to a baby boy fathered by Lent, who exhibited the same physical deformities as her. Tragically, the baby died just a few days later, and Julia herself would succumb from complications of giving birth, her last words allegedly being “I die happy; I know I have been loved for myself.” Lent would have her and the child embalmed and sell the corpses to the Anatomical Museum at Moscow University. Later he would come up with the idea that he could still have them perform in a sense, by exhibiting the bodies for money. From here Julia would continue her odyssey even in death. Lent bought the corpses back from the university and took them on tour around Europe in 1862, after which he gave them to a cabinet of curiosities in England, before getting them back in 1864 to exhibit along with his new wife, Marie Bartel, who also happened to be a bearded lady. The two would exhibit Julia’s preserved corpse for over a decade, before Lent allegedly went insane and died in 1885, but even this is not the end of poor Julia’s story.

After Lent’s death, Julia’s body would change hands numerous times and be exhibited all over the place by a variety of fairs, circuses, and cabinets of curiosities. By 1921 the corpse was in Norway, in 1943 the body was being displayed in Sweden, and by the 1973 Julia had made her way to America in a traveling amusement park, before returning to Norway again. In 1976, vandals damaged the corpses of Julia and her child, then in 1979 the bodies were stolen to vanish without a trace. At some point it seems that the body was found and given to police, but was then stored away in a basement at the Oslo Forensic Institute and forgotten because no one realized who the corpse belonged to. It would not be until 1990 that Julia’s body would finally be rediscovered and identified, and in 2012, she finally had a chance to rest when she was brought to Mexico for a proper burial after over a century on the road, although sadly her child was never found. And so the bizarre life of Julia Pastrana would come to peace, at least in a sense, leaving us with quite a weird journey and historical oddity, as well as a peek into another era in which freaks were at the same time seen as both more than human and less.

George Adamski: How the FBI Kept a Close Watch on the Legendary “Contactee”