The Bizarre Story of the Ground Control Crew UFO Cult

As long as the UFO phenomenon has existed there have been those looking to tap into it, shape it, mold it to their wishes, and convince others of their version of the "truth." This way lies the myriad UFO cults existing out there, which range from the harmless to those that have ended in tragedy. These are some very weird stories of people who have somehow been convinced to believe some very fringe beliefs, often only on the word of one leader who exudes authority and who is respected as being in the know. Rarely have such UFO cults ended up in a good place, and here we will look at another such belief system based on UFOs and an enigmatic leader with some rather strange messages for the world.

The whole strange affair begins with a man named Sheldon Nidle. Born on November 11, 1946, he would later claim that almost from his very birth he had been contacted by alien intelligences from the planet Sirius, who were allegedly part of a larger “Galactic Federation.” These aliens apparently contacted him throughout his entire life, communicating with him telepathically, taking him into their spaceship, and implanting him with what he calls “direct core knowledge inserts.” He would claim that he was a “star seed from Sirius” destined to do great things. Nidle would say that he then ceased contact with the aliens for some time while he attended Ohio University and the University of Southern California, graduating with an M.A. in Southeast Asian government and an M.A. in American politics and international public administration, eventually earning a PhD and pursuing research into alternative energy sources. He is obviously no fool, well-educated and eloquent, but in the 1990s he would get back to talking about aliens again when he claimed that the Galactic Federation had approached him once more, making him their representative on Earth.

In 1996, Nidle began talking of telepathic communications he had had with the Federation that dealt with some urgent business, indeed. The aliens allegedly told him of an incoming cataclysm that would wipe out Earth as we know it. According to Nidle, the planet would be transformed into a more pristine state by passing into the path of what he called the “Photon Belt,” which was an area of space imbued with strange energy properties that would metamorphize human DNA and give us super powers and the ability to regenerate and live forever, as well as telepathic abilities. Are you with me so far? Sounds pretty awesome so far, but the intelligences also told Nidle that passing through the Photon Belt would destroy much of the surface of the planet, with only those who hid underground or were whisked away on spaceships assured to be safe. Luckily for us, Nidle also claimed that the aliens were drilling out subterranean caverns for us to cower in, as well as calling in a fleet of, wait, let me see if I’m reading this right, yes, 15 million spaceships ready to take many of us away from certain doom to join a “deep space brotherhood.”

At the time, we were running out of time, as the channeled messages stated that Earth would pass through this Photon Belt no later than December 17, 1996, but not to worry, because the fleet was closing in, due to arrive in early December, and most of humanity would be saved and achieve “a paradise of sociological and ecological evolution.” The ships on the way to our planet were said to be coming from numerous far-flung spacefaring races, such as the Pleiadians, Sirians, Cassopeans, and Arcturians, all of them willing to help us out, as well as apparently actual angels. Nidle would give one message that reads of all of this:

Our planet is moving from third dimensional awareness (physical-material reality-what you can see, feel, hear, taste and touch), to a fourth and a fifth-dimensional consciousness. In these dimensions you will be fully conscious, you will exist in a state of love not fear. You will be telepathic and have much more light in your body. You will be able to create anything you want with your mind and the new technology that will be provided for you. This technology will be beyond your wildest imagination. You will be able to live for hundreds or thousands of years. You will be completely healed of anything that is now wrong with you. You could be 85 years old now and manifest a 20-year-old body. Very soon, we will have millions of space ships and visitors from outer space on this planet. Our government knows this is happening but they want you to be afraid so they can keep life as it has been. Our visitors will be joined with angels that you will see coming down with the ships. They are benevolent and loving. They will bring counselors, supplies, teachers and new technology. We are being assisted by all of Creation – the Spiritual Hierarchy, Angelic Realms, the Galactic Federation of Light, Ascended Masters, and our space brothers and sisters.

You are very blessed and very special to be on this planet at this time. Within a short period of time our planet will be receiving the Photon Belt. This belt of light comes around every 25,000 years. This time it will be ushering in the Golden Age. The photon energy is an extremely loving energy that is comprised of Photons, Gamma Rays, and Anti-matter Particles. When the Photon Belt hits we will have three days of darkness and one day of coldness. Then we will have 16 years of light, 24 hours a day. You will become fully conscious within the first hour when the light beam hits your pineal gland. It will activate all 12 strands of your DNA and you will be able to use all of the rest (90%) of your brain that you currently have not been able to use. You will be able to create with your thought, whatever you need, light up a room, warm yourself, whatever you need. There is nothing to fear. A paradise is being created on this planet that is beyond your furthest imagination. We send much blessings of love and light to you.” 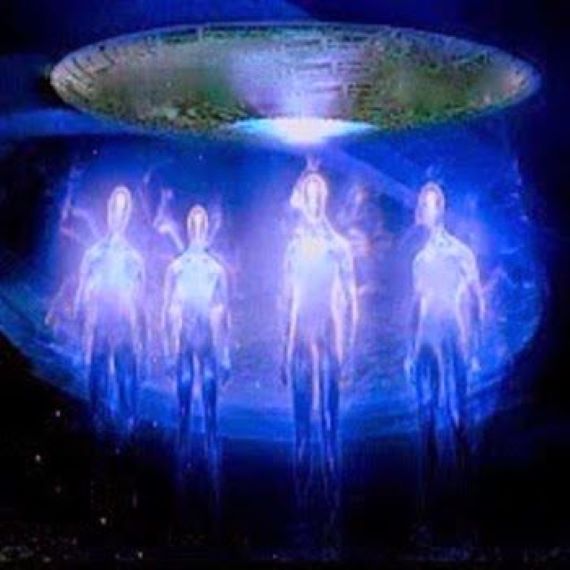 Pretty odd, indeed. There were some strict stipulations laid out for all of this awesome weird space stuff to pan out, such as neutralizing all earthly weapons, which were to be beamed up onto these spaceships, and all technology and mechanical devices were to be shut down upon the aliens’ arrival. We also had to agree to shut down all of our earthly government systems and give ourselves over to these beings, letting them take over with a “Spiritual Hierarchy,” which would help us ascend to higher beings. To help facilitate all of this, Nidle got online and began recruiting his “Ground Crew,” all of this almost exclusively done via the Internet, and this crew was given the task of acting as aides and ambassadors for the coming of the aliens, the training for which would be beamed into their heads as they slept through implant technology. They were also tasked with trying to raise spiritual awareness of what was to come, help us reach a “critical mass of spiritual energy,” and to carry out efforts to ecologically help out the planet. Unfortunately, even with all of these efforts, the aliens’ planned landing in December of 1996 never materialized. Many were dejected, but for Nidle this wasn’t a problem.

The leader of the Ground Crew simply blamed the failure of the arrival on numerous setbacks, such as solar storms, unforeseen technical issues, and humanity simply not being ready yet. It is pretty par for the course for any self-proclaimed prophet whose predictions did not come to pass, but he handled it like a pro. Nidle’s followers believed him and anxiously awaited their spiritual revolution. With the approach of the Hale-Bopp comet in February of 1997, Nidle found the perfect way to continue the mythology by working the comet into the lore, and for good measure he increased the number of approaching spacecrafts to 25 million (!). Nidle claimed that the comet was actually one immense starship with a crew of 20,000, that was merely using holographic cloaking technology to camouflage itself, and that it was followed not far behind by the rest of the massive fleet. To make it sound legit, Nidle even concocted a story that Ground Crew members had had a meeting with alien scouts in the Australian desert at Ayers Rock.

Of course, Hale-Bopp came and went with no such alien space force appearing, so Nidle was once again forced to think on his feet. He began spinning stories of “dark forces” seeking to sabotage the plans, forcing the benevolent forces to delay their arrival until “the right divine time.” According to Nidle, in the meantime we were to act as stewards of the planet and seek to help it recover ecologically and spiritually. Behind the scenes there was some turmoil within the organization, with Nidle clashing with his secretary and the Ground Crew's chief administrator, Valerie Donnell, causing Nidle to break off and form the “Planetary Activation Organization,” still claiming to be the only one in direct contact with the aliens. His rhetoric would change and evolve, now saying that the aliens were placing “Star Gates” in the upper atmosphere and that there was a secret cabal of Earth leaders who were actively trying to stop the coming of the fleet. Somehow, even with the date of the supposed alien force pushed back again and again, Nidle was able to maintain hundreds of thousands of followers in 29 countries. The organization continues to this day, and we are left to wonder, how does this all keep chugging along? Whatever the case may be, it is certainly an entertaining and intriguing look into some far out stuff.

My Thoughts and Hopes for the Thylacine: I’m Still Hopeful!