The Dark Story of the Gombe Chimpanzee War

We tend to think of warfare as a uniquely human trait. After all, although animals do attack and kill each other, this is usually all a part of nature's circle of life and death, right? This seems to be all fighting over territory, food, or mates, at the whims of their natural instincts, and there is usually little thought given to the fact that animals might wage premeditated war with each other, taking sides and engaging in strategy like us. Yet, humans don't seem to be alone in our capacity for power struggles, alliances, and flat out war, and this can be seen with the spooky case of a group of chimpanzees in Africa that began a full-fledged civil war, which remains the only witnessed such incident of its kind.

Back in the 1970s, the famed English primatologist and anthropologist Jane Goodall was embedded within a community of chimpanzees at Gombe Stream National Park, once known as the Gombe Stream Research Centre, in Tanzania, Africa. There she studied the chimps and lived amongst them, taking detailed notes on their behaviors, their social interactions, their community structure, all aspects of their lives, greatly expanding our knowledge of these creatures, our closest living relatives on Earth. She was the first to really take such a deep, meticulous look into their lives and behaviors, constantly in awe of just how many of their traits were similar to human beings, including generosity, kindness, friendships, and altruism. However, she would also be the first to witness that they also had some of our worst traits.

At the time, there was one large unified group of chimps called the Kasakela community, but beginning in 1971, Goodall noticed that one group of the apes was spending more time to the north, while another mostly stayed in the south. Over time, they seemed to be splintering into two distinct factions, with the northern group, called the Kahama community, led by two brothers named duo Hugh and Charlie, and the southern group, still referred to as the Kasakela, led by the alpha male Humphrey and his associates. Goodall reasoned that the reason for the split was that the old alpha male of the Kasakela, a chimp called Leaky, had died, to be replaced by the chimp Humphrey, who was abrasive and not accepted by Hugh and Charlie at all. Goodall would report that Humphrey was very large and strong, prone to bullying the brothers separately, but they realized that when they were together Humphrey would back off. This likely led them to deciding to form their own group, taking along any others with whom they had had strong social bonds. As to their numbers, the Kahama separatists consisted of six adult males, three adult females and their young, while the Kasakela group was composed of eight adult males, twelve adult females and their young.

This was an intriguing sequence of events, as no one had ever seen a single group of chimps break off into two separate factions like this in the wild before, but at first it did not seem to be a problem. The Kahama stayed in the north, the Kasakela in the south, and they mostly sort of left each other alone, with the males from each group even occasionally intermingling, but that was about to change. The two groups began spending less and less time interacting, becoming more solidly isolated from each other for reasons that are still not totally understood. They were also less and less friendly towards each other when approaching the feeding station, with the males hooting and hurling sticks and rocks in a show of strength, something they had never done with the others when they had been one group. It would have all been very scary to an observer, to see these very large and strong animals, many times stronger than a human adult male, fiercely throwing things and jumping up and down hollering and hooting, but at this point there was no actual direct violence. At first, this was all just bluffing and trying to show each other who was more badass, but again things were about to change. 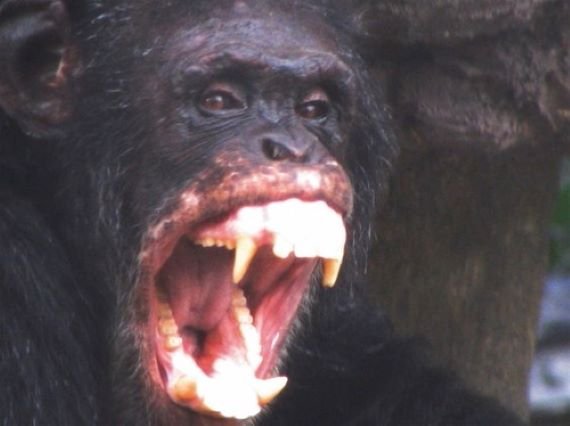 It was the southern Kasakela community who would draw first blood. On January 7, 1974, the Kasakela formed a war party composed of six adult males including Humphrey and five others named Figan, Jomeo, Sherry, Evered, and Rodolf. The team infiltrated the northern territory and found a Kahama male named Godi by himself feeding by a tree. The Kasakela group were obviously looking for trouble, because they immediately ambushed Godi and proceeded to savagely and mercilessly beat him to death. This particular attack was witnessed first hand by Goodall herself, who was powerless to do anything to stop the bloodbath, and was shocked as this was the first time she had ever seen a chimp murder another chimp in cold blood. Goodall had made a career of emphasizing the kinder, gentler nature of chimpanzees, so this breathtaking act of extreme, terrifying brutality and violence was utterly shocking. Making it worse was that after killing Godi, the Kasakela chimps celebrated boisterously, screaming, hooting, dragging around branches, thumping the ground, obviously basking in their victory, and they weren’t even done yet. Over the coming days, these raids would continue, and more Kahama males would fall, including Hugh, and the males De, and Goliath, who was an older chimp who had always been more peaceful and friendly than the others, well liked by the other males and having taken care of most of his killers when they were young. It didn’t matter, he was mercilessly beaten to death like the others. One primate researcher who was there at the time, Anne Pusey, would describe these bold attacks from the south:

Groups of males would slip into rebel territory and savagely beat a single chimp. We would hear these pant-hoot calls from the south and say to ourselves: the southern males are coming! All the northern ones would go up trees, and there’d be a lot of screaming and displaying.

The Gombe Chimp War would rage on for four whole years, with both sides trying to make land grabs and ambushing each other, but the Kasakela chimps were clearly winning. They whittled the Kahama down to just three males, then two, until only one, a young male named Sniff, remained. The Kahama females were not immune to the atrocities either, with one killed, several more beaten and kidnapped, and others simply vanishing without a trace. On one occasion it seemed as if the Kasakela group was trying to recruit a large Kahama male, but killed him when he refused to join them. On another occasion, a Kahama chimp named Michael, who was sick with polio and could not fight back, was ruthlessly executed. This was brutal stuff. Sniff did his best to maintain his territory by himself, but he was hopelessly outnumbered and overpowered, and he too was eventually killed after holding his own for a year against the Kasakela. With the death of Sniff, the war was over, the Kasakela claimed the Kahama territory as their own, absorbed the defeated remaining rebel groups members, and the Kahama was no more. 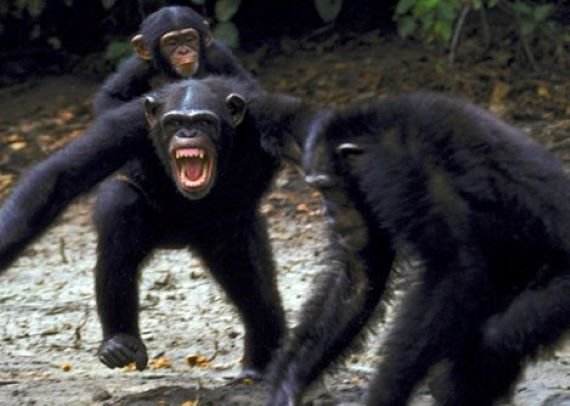 Interestingly, the Kasakela seemed to have been power hungry at this point, drunk on victory and looking to spread out their territory even further, something they had never tried to do before. Unfortunately for them, they faced another chimpanzee community, called the Kalande, who were more numerous and powerful. After several skirmishes along the border, the Kasakela were eventually repelled by the superior Kalande forces, who then tried unsuccessfully to claim the Kasakela territory. In the end, hostilities died down and balance was restored, returning to the state of things as they had been before the Kasakela civil war had started. The Gombe chimpanzee war remains the first known civil war ever witnessed in wild chimps, and it left Goodall and her team speechless. The war had shattered many misconceptions she had had of chimps, such as that they were at their core benevolent and peaceful creatures, and over the years she would become more attuned to the dark side of chimpanzee behavior, such as murder and infanticide. The war haunted her, and she would write in her memoir Through a Window: My Thirty Years with the Chimpanzees of Gombe:

For several years I struggled to come to terms with this new knowledge. Often when I woke in the night, horrific pictures sprang unbidden to my mind—Satan [one of the apes], cupping his hand below Sniff's chin to drink the blood that welled from a great wound on his face; old Rodolf, usually so benign, standing upright to hurl a four-pound rock at Godi's prostrate body; Jomeo tearing a strip of skin from Dé's thigh; Figan, charging and hitting, again and again, the stricken quivering body of Goliath, one of his childhood heroes.

Truly chilling stuff. At the time, this was so shocking and unexpected that the larger scientific community was skeptical and slow to even believe that a natural war between chimps had happened at all. Goodall was accused of over anthropomorphizing the apes, with some even suggesting that it had been her presence and the research team’s feeding stations that had incited it.  However, over the years, careful study of Goodall’s data and notes proved that she was right, and that this was the first and only known war between chimps. The exact cause for it all is still not fully understood, but it is a spooky peek into the world of our closest living relatives. Although they seem to have many of our finer attributes, chimps also seem to embody some of our worst, and the case of the Gombe Chimp War has gone on to become a chilling case study of warfare among animals other than humans, as well as a reflection on ourselves as a species.

All About Those Flaming UFOs! Literally Flaming!