The French Zoologist Who First Described What Martians Looked Like

There was a time when the planet Mars was considered to lie at the very fringes of the known universe. As we as a species became aware of other planets within our solar system, there were those among them which caused much speculation and debate to gravitate towards them. One of these was the Red Planet, located just the right distance away from the sun, beckoning to us with its mysteries, promising a whole other world beyond our wildest imaginings. Mars was the focus of much study and observation, and this was the era of claims of canals and structures out there, signs of life and perhaps even an alien civilization. Long before our Mars rovers and serious efforts to set down upon its surface, Mars was generating wonder and awe, and a big part of this was the French zoologist who first speculated on what out celestial neighbors looked like.

Jean Octave Edmond Perrier (1844-1921) was no crackpot. A French zoologist known for his respected work studying invertebrates and his sea expeditions to study marine life in the benthic zone, he was widely praised as one of the top experts in the field of marine fauna, and he was at various times a member of the Académie des sciences, director of the museum of the Jardin des Plantes, in Paris, the chairman of the Société zoologique de France, and a member of the Académie nationale de médecine. In other words, he wasn’t some crank weirdo, but rather a renowned scientific mind and at the top of his field. He was also very interested in evolutionary biology, including the theories of Charles Darwin and Jean-Baptiste Lamarck, which converged with his interest in Mars. Perrier would take the popularity of Mars at the time and use his knowledge of evolution and zoology to create what is perhaps one of the first real, scientific attempts to try and create a picture of what an alien on another world would look like.

At the time, Mars was well lodged within the public consciousness, and was extremely popular among scientists and academics as well. Mars was seen as a mysterious new frontier, with very little known about it and much speculation on the idea that it was home flora, fauna, and an intelligent alien race. This was not considered crackpot nonsense at the time, with many respected scientists and innovators making such claims. One of these was Italian inventor and pioneer of radio technology Guglielmo Marconi, who believed that he could make radio contact with Martians, and even created a rig for doing just that, even believing that he had succeeded. Marconi would say:

I have encountered during my experiments with wireless telegraphy a most amazing phenomenon. Most striking of all is receipt by me personally of signals which I believe originated in the space beyond our planet. I believe it is entirely possible that these signals may have been sent by the inhabitants of other planets to the inhabitants of earth. If there are any human beings on Mars I would not be surprised if they should find a means of communication with this planet, a linking of the science of astronomy with that of electricity may bring about almost anything.

Others who pursued this were Thomas Edison and Nikola Tesla, both of whom believed that this was completely plausible. Indeed, Tesla also believed that he had successfully made contact with aliens from Mars in 1899 at his lab in Colorado Springs. Tesla was apparently quite obsessed with the idea of communicating with these aliens, pursuing it for some time. There was also Professor Percival Lowell, director of the observatory at Flagstaff, Arizona, who truly believed that there were aliens on both Mars and Venus. Lowell believed that Mars held alien civilizations far beyond us in terms of intelligence and technology, saying of this in the February 8, 1920 edition of the New York Tribune:

Quite possibly, the Martian folk are possessed of inventions of which we have not dreamed, and with them electrophones and kinetoscopes are things of a bygone past, preserved with veneration in museums as relics of the clumsy contrivances of the simple childhood of the race. Certainly, what we see hints at the existence of beings who are in advance of, not behind, us in the journey of life. Startling as the outcome of these observations may appear at first, in truth there is nothing startling about it whatever. Such possibility has been quite on the cards ever since the existence of Mars itself was recognized by the Chaldean shepherds, or whoever the still more primitive astronomers may have been. Its strangeness is a purely subjective phenomenon, arising from the instinctive reluctance of mind to admit the possibility of peers. Such would be comic were it not the inevitable consequence of the constitution of the universe. To be shy of anything resembling himself is part and parcel of man’s own individuality. Like the savage, who fears nothing so much as a strange man; like Crusoe, who grows pale at the sight of footprints not his own, the civilized thinker turns from the thought of mind other than he himself knows. 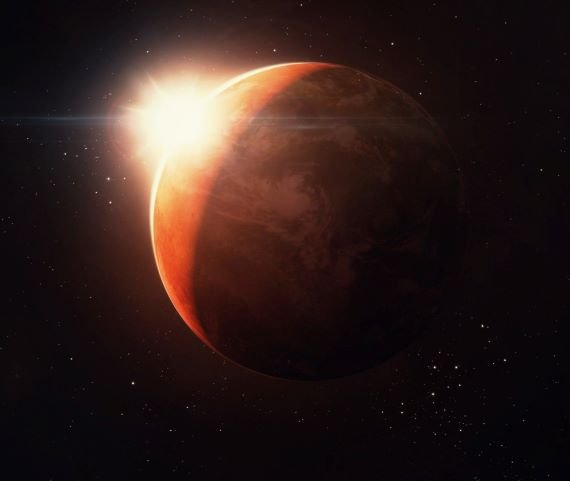 Obviously, Mars was a hot topic, and the focus of much scientific speculation, yet there was no real description of what the Martians actually looked like until Perrier came along. He too was convinced that life existed on the Red Planet, including flowers and trees, but he went one further in trying to scientifically deduce what the Martians themselves would look like. To do this, he took into account various factors, such as the atmosphere, temperature, length of a day, the weather conditions, and the gravity of Mars to try and deduce how the Martians would have evolved, although knowledge of these factors at the time was limited at best, meaning he was already working with wrong information. For instance, of the conditions on Mars, Perrier would say that the mean temperature was 40 degrees Fahrenheit, although summers were warmer than Earth, that there was rain, snow, and hail, and that “vegetation is luxuriant,” with many types of animals being similar to those on Earth, including fish, butterflies, and insects, although all of them are larger due to the reduced gravity. He nevertheless had a grasp that gravity was lower on Mars, and that the atmospheric pressure was different. He would say of life on Mars in general:

The year on Mars is twice as long as our earthly one, and hence plants and insects have twice the time in which to evolve. Mars is the land of huge plants and ideal flowers, of birds abnormally powerful in song and wondrous in appearance, and of four-footed animals with extraordinarily developed fur and skin.

As to how Martians would look, he took into consideration the amount of “fierce light” the planet received, as well as the atmospheric pressure, gravity conditions, and others. For instance, since the gravity was lower on earth, he surmised that the Martians were very tall, up to twice as tall as human beings, with long, slender limbs and little to no neck. He also believed their ears would be larger, in order for them to hear better in the thin atmosphere, their jaws would be narrower, and they would be blonde haired due to the less intense light. He would say of the appearance of the Martians in the New York Times in 1912:

The men on Mars are tall because the force of gravity is slight. They are blond, because the daylight is less intense. They have less powerful limbs. They have some of the characteristics of our Scandinavian type, although they probably have larger skulls. They are about twice the size of human beings, and have enormous noses and large protruding eyes. Their eyes are probably blue and their hair is almost white. They have no necks, no waists, very prominent ears, and large heads and bodies, supported by very thin legs and very small feet. The low atmospheric pressure has produced a considerable development of the pulmonary apparatus, and consequently the general character of the Martians has been influenced by this development, which is unknown on earth. Their large blue eyes, their strong noses, their large ears, constitute a type of beauty which we doubtless would not appreciate except as suggesting superhuman intelligence. 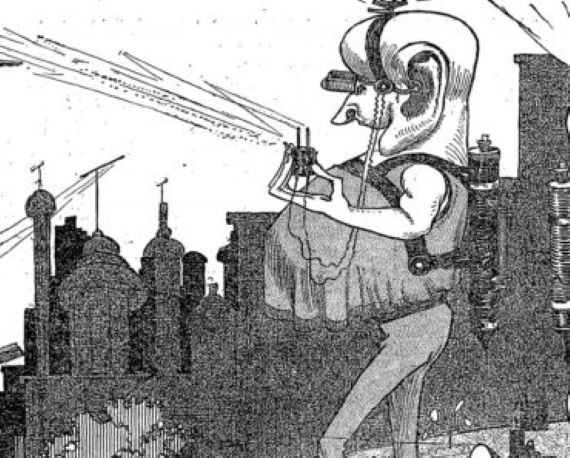 Perrier firmly believed that these Martians were far more advanced in their society and technology than on Earth. He believed they had no war, and that poverty was nonexistent, nor were there any laws or centralized government because they lived in complete harmony. They were depicted by Perrier as being a benign and altruistic society full of wisdom and understanding, and he would say of this:

Being older, they are also wiser than we. They have long since conquered disease, and know the hour of their demise, awaiting the event calmly. They have overcome poverty, are too sophisticated to engage in war, and need no law or government to keep them orderly. Philosophers and brothers, they live in amity and understanding, devoting all their thought to the promotion of large undertakings in which selfishness, avarice and earthly trifles have no part.

This was much different than the growing conception at the time that Martians were a malevolent, war-like race, fueled by the popularity at the time of the HG Wells novel War of the Worlds. Indeed, Perrier specifically singled out War of the Worlds as being completely wrong in its depiction of Martians, saying that the book was a “great injustice and created a prejudice against them, which is not only unscientific and unsound, but entirely undeserved.” Of course we now know that Mars is nothing like what people envisioned at the time, and that many of these speculations seem ludicrous now, but this is what it was like in the era. It is a snapshot of another time, when we were tentatively reaching out to the stars, stretching our imaginations out into the unknown and wondering what the mysteries of the universe hold.