The Legendary Thunderbirds: The Largest Birds That Ever Lived?

In October 2020, the Smithsonian Magazine ran a fascinating article on what may have been the largest bird that ever lived. In part, the article stated: "Imagine an albatross with a hacksaw for a mouth. Set that strange creature about 50 million years in the past and you’ve got the image of a pelagornithid, a group of ancient avians that included some of the largest flying birds of all time. And now paleontologists have uncovered in that group what may be the largest known flying birds ever, with wingspans of roughly 20 feet." It's possible, however, that there could have been even bigger birds in our skies. Welcome to the world of the Thunderbirds. Legends of America say: “Described as a supernatural being, the enormous bird was a symbol of power and strength that protected humans from evil spirits. It was called the Thunderbird because the flapping of its powerful wings sounded like thunder, and lightning would shoot out of its eyes. The Thunderbirds brought rain and storms, which could be good or bad. Good – when the rain was needed or bad when the rain came with destructive strong winds, floods, and fires caused by lightning. The bird was said to be so large, that several legends tell it picking up a whale in its talons."

There is this, also, from Native Languages: “The Thunderbird is a widespread figure in Native American mythology, particularly among Midwestern, Plains, and Northwest Coast tribes. Thunderbird is described as an enormous bird (according to many Northwestern tribes, large enough to carry a killer whale in its talons as an eagle carries a fish) who is responsible for the sound of thunder (and in some cases lightning as well.) Different Native American communities had different traditions regarding the Thunderbird. In some tribes, Thunderbirds are considered extremely sacred forces of nature, while in others, they are treated like powerful but otherwise ordinary members of the animal kingdom."

Cuyamungue provide data, too: “The wingspan of the Thunderbird was described to be twice as long as a Native Indian war canoe. Underneath its wings are lightning snakes which the Thunderbird uses as weapons. Lightning is created when the Thunderbird throws these lighting snakes or when he blinks his eyes that glow like fire. Sometimes these lightning snakes are depicted in Native American art as having wolf or dog-like heads with serpent tongues. They are occasionally referred to as the Thunderbird’s dogs. Native American art portrays the Thunderbird with a huge curving beak and prominent ears or horns." Now, let’s get to to a very mysterious aspect of all this. It’s the matter of a vanished photograph of just such a creature that numerous people in the fields of Cryptozoology and the paranormal swear they have seen, but which can no longer be found. Anywhere. It’s as if the photo has been erased from our time-line – something that, you may recall, almost happened to Marty McFly in Back to the Future. That may be precisely what happened in the real world. We might say that while portions of the time-line are gone, the memories and recollections of those who saw the Thunderbird picture before it vanished are not gone. 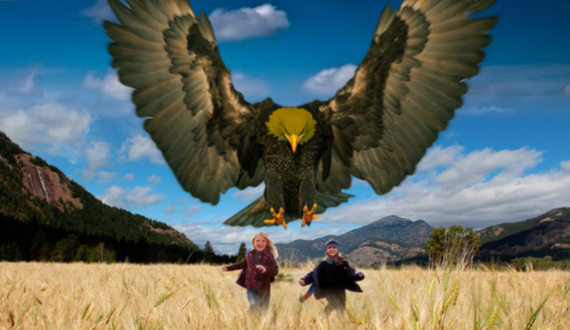 The picture is said to have originated in the 1800s. Searches for the photo have not resulted in the discovery of anything relevant. Magazines like Argosy, True, and Saga have been scrutinized to the ultimate degree. The picture still remains missing. How can so many investigators of the supernatural and the cryptozoological have seen such a photo, but which now cannot be found anywhere? Josh Warren has a fascinating theory: "I get the impression that there might be a shifting timeline that we are passing through on a day-by-day basis. One day UFOs might be real, and the next they're not. The next day Bigfoot is running around your backyard, and the next day he doesn’t exist. One day the Thunderbird photo is in a magazine, and then when the timeline is played with again, it’s no longer in the magazine. And it may be that, day by day, hour by hour, or even minute by minute, small changes to the timeline are being made."

The Thunderbird: an incredible creature, revered by Native Americans, and possibly with a connection to time-travel. Amazing, to be sure.