The Mysterious Djinn-Haunted Ghost Town of the UAE

Located just to the south of the city of Ras Al Khaimah in the United Arab Emirates is an old abandoned seaside village that sits there as if an insect in amber, frozen in time. Called Al Jazirat Al Hamra, or literally “The Red Island,” it was once an uninhabited speck of a tidal island until members of the Arab seafaring and pearl-diving tribe, the Zaab, began to come here to set up a modest pearl diving village in the early 1800s. It started off rather small, just a hodgepodge of ramshackle huts, but by the 20th century around 2,500 people lived here, with a fleet of over 25 pearl diving boats, and it was considered an important pearl trading center in the region. In its heyday it was a bustling seaport, but it would go into decline in the 1920s with the crash of the pearl trade, largely due to the advent of cultured pearls, and the town would fall into disputes and disarray before an exodus of people in 1968 to the city of Abu Dhabi that left it a lifeless husk. From there, the abandoned ghost town of Al Jazirat Al Hamra would accrue a reputation as a mysterious and haunted place and a haunt for the ancient spirits known as the Djinn.

It is interesting in that this place should sit abandoned and empty when it is surrounded by numerous resort towns, hotels, and shopping malls. Many of the visitors to the nearby resorts are not even aware that just a stone’s throw away this forgotten place trapped in time exists, with around 400 buildings, including mosques, merchant shops, a dilapidated fort and old watchtowers, as well as residential dwellings, many of the coral and mud buildings still with furniture and things laid out as if waiting for people who will never return. It is perhaps this eerie ambiance and these empty buildings and twisting warrens of narrow streets that have led to numerous tales of the supernatural at Al Jazirat Al Hamra, and it has become known as a very haunted place that locals steer clear of.

People have long reported a variety of strange phenomena from the Al Jazirat Al Hamra ghost town, ranging from the innocuous to the terrifying. A common occurrence is the almost unbearable feeling of being watched from the shadows, or the sense that someone is standing right there when there is nothing but shadows. There are also reports of mysterious lights within the dwellings or of shadow figures lurking about. Oddly, reports of cats that will cross the street only to vanish into thin air have come from here, and there are also roving cold spots and sudden feelings of extreme panic and dread that seem to come from nowhere. Yet the most popular tale to come from this ghost town are the stories that it is haunted by the ancient entities of Arab folklore called the Djinn, also spelled Jinn.

The Djinn are supernatural creatures from early pre-Islamic Arabian and later Islamic mythology and theology that are often called “Genie” in English, but these are quite different than the image that most people may have from movies like Aladdin. They are often seen as powerful supernatural beings similar to demons, and they are mostly depicted as rather malevolent, although they are technically not innately good nor evil. While local lore on these beings varies greatly from region to region, they are very often described as tricksters and seen as responsible for misfortune and disease, as well as possessing humans and with the power to shapeshift into a wide variety of animal forms. The Djinn are still widely believed by the locals in many Middle Eastern countries, and one place where they are said to be very active is at Al Jazirat Al Hamra, with many reports coming from here attributed to these mysterious entities. One elderly fisherman by the name of Saif Rashed once lived at Al Jazirat Al Hamra, and told The National News a typical tale along these lines:

I was born at sea. I got grey hair at sea. I’ll tell you some stories. When I would go down to catch the oyster, the pearls, the djinn would be clapping. They used to slap us, too, and we’d faint under the sea. We never saw them. Just heard them. They used to come in the shape of a fish, a hammour. If you touch them or they came near you, you got electrified. 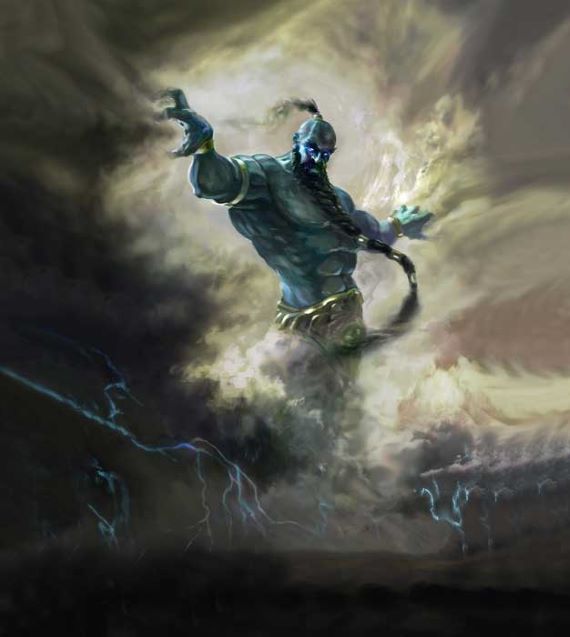 According to the ones who used to dive here for pearls, it was not uncommon for divers to be knocked unconscious by the Djinn, after which the others would recite prayers while the victim was hauled to shore. On other occasions, a diver might be possessed by a Djinn, answering questions in a high, reedy woman’s voice. Other stories by locals are that the Djinn would take the form of talking animals such as goats or cats, with animals sometimes transforming into a different form right before one’s eyes. On other occasions they were said to chase people or try to steal from them, and in this particular village they were said to often appear out on the water or under it. One retired pearl diver from the town’s heyday has said of this:

There are lots of djinn in Jazirat. There are djinn everywhere, everywhere but we see them on top of the sea, naked with slit eyes and scars. They are so frightening; your hair stands on end.

Locals rarely seem to want to talk about the Djinn, hesitant to tell these tales to outsiders, but such stories have leaked out enough that Al Jazirat Al Hamra is considered by many to be a prime haunt for these particular spirits. However, other locals have claimed that in modern times the surrounding construction and the use of cars and modern technology have caused the Djinn move on and abandon this place just as surely as the people who once lived here. In recent times, there have been some efforts to restore the village and turn it into a cultural heritage site and tourist landmark, so if there are any Djinn still here, they may not be for long. Is there anything to all of these stories, or is it just superstition and old legends orbiting an undeniably spooky place? There is no way to really know, but no matter what the case may be, this ghost town is a compelling look into another era and a snapshot of another time in a faraway land.