One prevalent phenomenon in the world of the paranormal is called spontaneous human combustion. It typically entails someone mysteriously bursting into flame, being burned down to a charred husk for no discernible reason, often with other things around them that are untouched by the flames. Such cases of this are numerous, but some really stand out, and this is one of those. Born in Edmonton, London in 1921, the woman called Jeannie Saffin already had a fairly rough life. She suffered from a birth defect that had severely stunted her mental growth, never allowing her to advance past the mental abilities of those of a child. She had never been able to live on her own or take care of herself, so at the age of 61, the unmarried Jeannie, who was still mentally at the level of a 6-year-old, was living with her 82-year-old Father, Jack Saffin. They had a mostly content life, despite Jeannie’s handicaps, but one evening in 1982 would spiral into horror and a strange mystery that is still discussed to this day, as well as one of the most talked about cases off supposed spontaneous human combustion.

On September 15, 1982, Jeannie was at home with her father and brother-in-law, Don Carroll. It was a perfectly normal, peaceful evening, with nothing out of the ordinary and no way to know that something very bizarre and terrifying was about to happen. It all started when Jack was in the kitchen getting dinner ready as Jeannie sat calmly in her usual chair at the table right nearby. At some point Jack saw a bright flash from the corner of his eye, and was shocked to turn to see his daughter on fire. Eerily, she was reported as just sitting there calmly with her hands in her lap as the flames rapidly spread out. She didn’t cry out or scream, just sitting there as the flames consumed her, although Carroll would later claim that when the fire reached her face she had belched flames that were “coming from her mouth like a dragon and making a roaring noise.” 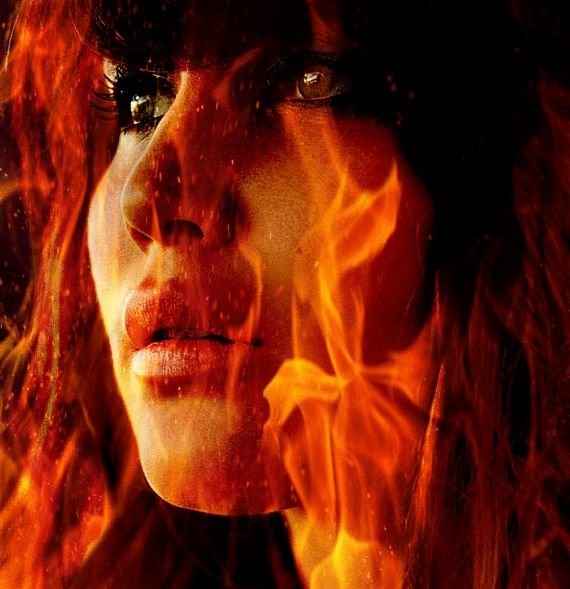 Jack and Carroll sprang into action, managing to douse the raging fire with water from the kitchen, but although Jeannie was still alive at this point she was horribly burned. She was rushed to the burn unit at Mount Vernon Hospital by ambulance, but tragically would slip into a coma and die of her burns 8 days later. Rather spookily, at no point during the time that she was still conscious did she cry out in pain, rather just staring off into space as if in a trance. This is despite the fact that her burns were very serious, and doctors were shocked to see that the woman’s flesh had been burned away all the way down to the subcutaneous fat, with most of the damage focused in her face, abdomen, and hands, which were little more than skeleton. Also very strange was that her clothes were reportedly only lightly singed in places, and had not been completely burned away as would be expected.

When investigators examined the scene of the strange incident, they were rather perplexed by some odd details. They noticed that both the chair Jeannie had been sitting in and the adjacent walls were unmarked and undamaged by fire or smoke, and not only that, but there was no obvious source of ignition for the fire. The nearest flame that could have caused it was some 5 feet away, in the form of the pilot light for the gas stove, but she had been nowhere near it and it was protected by a grill hood that would have prevented it from igniting a person even standing right up against it. In addition, Donald Carrol would insist that the pilot light had not even been turned on at the time anyway. Another possibility was that Jack was known to smoke a pipe, and it was reasoned that a stray ember could have fallen on Jeannie, but Jack and Carroll both agreed that he had not been smoking at the time, and police found only fresh, unburned tobacco in the pipe on the table. So how had the fire started? No one had a clue. Police did consider the fact that both Jack and Carroll might have been lying about what had really happened, but there was no evidence that this was the case. PC Leigh Marsden of Edmonton Police Station would come to the conclusion that it was a case of spontaneous human combustion, but the coroner disagreed, saying there was “no such thing” and officially stating that it was an open verdict of death by “misadventure.”

This still doesn’t really answer what exactly happened to Jeannie Saffin. What caused her to explode into flames like that and be so thoroughly charred? Why was it that only certain parts of her body were burned and why had she not screamed or panicked? What was the roaring noise that was heard? How is it that nothing around her had been burned? In later years there have been efforts to try and explain some of these things, and there have been some holes in the story found as well. For instance, while most versions of the tale tell of Jeannie’s clothes being unburned, it was later found by research carried out by skeptic Joe Nickell that one of the paramedics at the scene in fact did state that her clothes had been on fire too, and that they had been put out with a wet towel. As to how the fire started, Nickell has also insisted that Jack had been likely smoking earlier, and that perhaps some of the pipe embers had landed on Jeannie’s clothes to smolder, only later fully igniting with a draft. It has also been pointed out that Jack Saffin was practically deaf, making his testimony of what had happened perhaps not totally reliable. The roaring sound was likely caused by the rapid evaporation of water from Jeannie's body, and the lack of pain response could have been due to shock and perhaps medication she was on. However, even if these skeptical arguments are true, we are left to try and figure out how her body would ignite so spectacularly in the first place and why it had not burned anything around it. 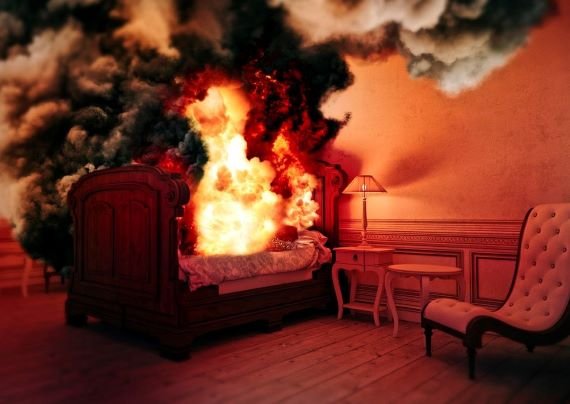 The human body is composed of mostly water, and in fact is very difficult to catch on fire and fully burn in a short span of time as described here, something anyone who has tried to cremate one will attest to. How could she just so suddenly and completely burst into flame like that and be burned so thoroughly down to the bone in some places in the span of just a few minutes? One idea is that this was due to what is called the “wick effect,” essentially the idea that the fats in the human body can under some circumstances act like the wick of a candle, but this process would take hours to cause the kind of burning seen with Saffin, and she was only in flames for one or two minutes at most. It is the stubborn mysteries such as these that have kept the case alive, and of course there are those that hold this up as not only a genuine and exceptional case of spontaneous human combustion, but also one of the only known cases of this phenomenon that was actually witnessed firsthand as it occurred. Some researchers have even gone further and suggested that spontaneous human combustion could be even weirder than it seems already. Scientist Larry Arnold has studied the phenomenon for decades, and it convinced that there are what he called “fire leynes,” which are geographical hotspots for spontaneous human combustion and which he believes Britain happens to have a high concentration of. He says of this:

There are more cases in the UK per head of population than anywhere in the world, a veritable cartography of combustion. If you are in the wrong place at the wrong time you, your dog, your car, or your home, seems more likely to go up in flames. We have no way to explain these cases other than these people burn themselves from the inside out. We have medical evidence to show this and witnesses - even survivors. It's as bizarre as nature gets, yet mainstream science won't accept it can happen.

Is there anything to this? There have been all manner of explanations posited for why spontaneous human combustion might happen, ranging from the mundane and practical to the truly outlandish, and although it has all been discussed and debated for a very long time, there seems to be no firm agreement on the matter. In the meantime, cases still come in from time to time, with Saffin's being a rather recent one that has the added benefit of having actual witnesses to the incident. What happened to Jeannie Saffin? How could she just go from sitting there to engulfed in flame and burned to the bone in just minutes without any discernible source or reason? Can this somehow be explained in rational terms, or is this an example of forces beyond our understanding? We may never know.

Nearby “Super Earth” May Have an Atmosphere Worth Studying