The Mysterious Flaming Ghost Ship of the Bay of Chaleur

Sprawled out in the Gulf of Saint Lawrence, located between Quebec and New Brunswick, is the Baie des Chaleurs, or known in English as the Bay of Chaleur. The bay stretches for 27 miles, and is well-known for its treacherous weather and fierce winds, generated by the steep cliffs that line much of its shoreline, as well as for its rich biodiversity and abundant fishing grounds. However, one thing the Bay of Chaleur is also known for is a strange ghostly phenomenon that takes the form of a massive spectral ship wreathed in fire.

What has become mostly known as the “Phantom Fire Ship of Chaleur Bay” has been seen for centuries, in all parts of the bay and in every season, although almost exclusively at night. Typically, the apparition will take the form of an old fashioned three-masted, full-rigged vessel sailing vessel spewing flames, and will either be sailing on the water or hovering above it. In some instances, it can look quite dramatic, with some reports mentioning what looks like a “wall of fire” or a firestorm surrounding it. Some reports will mention a ghostly crew on the ship’s decks or climbing about on the blazing rigging, similarly engulfed in flame and sometimes described as wailing or screaming, while on other occasions the ship is said to have no crew at all. The flaming ship will patrol the area for some time, anywhere from several minutes to hours on end, before vanishing into thin air, sometimes fading gradually, but on other occasions disappearing in a bright flash of light, and many locals claim that it is more likely to appear before storms. When it appears, the ghostly fire ship will often be seen by hundreds of people at a time, with whole communities on the coast witnessing it, and it can be very awe-inspiring for someone seeing it for the first time. One local archivist and genealogist Florence Godin, who has written dozens of books on the history and lore of the region, first saw the Fire Ship of Chaleur Bay in the 1950s, as she was taking a walk along the shoreline. She then noticed a crowd looking out over the water and a taxi come screeching to a halt for its occupants to jump out and point excitedly. She says of what she saw when she looked out over the sea:

At that age, I never heard of the phantom ship. That was the only time I looked at it. It was sails. There were big sails. It was slowly drifting, bobbing up and down. The sails were all aflame and the fire seemed to be coming from the bottom of the boat. The colour was just indescribable. It was beautiful. The sails crashed down and its Waterloo was becoming ever clearer. It was really eerie. Really strange. 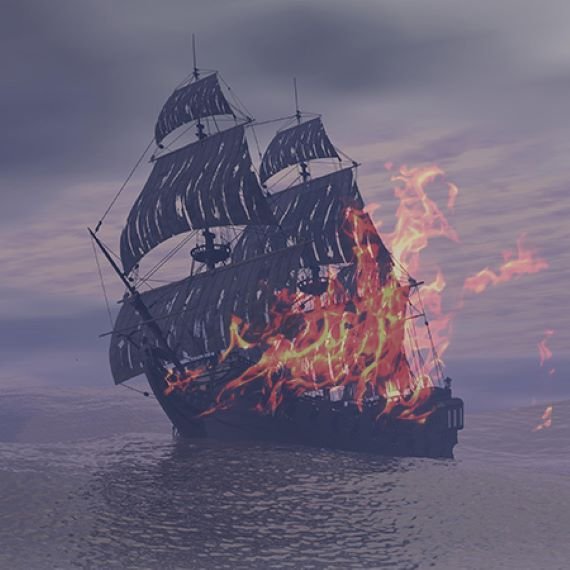 So, what is the Fire Ship and from where does it originate? This seems to rather depend on who you ask, as there are plenty of different pieces of lore attached to the phantom ship. One of the most popular stories about the ghostly ship and crew involves two 16th century Portuguese explorers and traders by the names of Gaspar Cort-Real and his brother Miguel, who one day decided to try and abduct some of the local tribesmen to sell into slavery. According to the story, they brought some Natives on board under the pretense of negotiating a trading deal, but instead got the men very drunk and chained them up below decks and whisked them off to a life of slavery. When Cort-Real returned some time later to get more slaves, the Natives supposedly rose up and killed Gaspar. His brother Miguel was then ambushed aboard the ship and set it on fire in a bid to escape, apparently cursing the vessel and swearing it would haunt the bay for a thousand years. Another rather popular tale is that the phantom ship is an English ship called the Lady Colbourne, which in 1838 was wrecked off the coast while carrying a large shipment of gold. There are plenty of other stories as well. One comes from the French and Indian War of 1760. During the naval Battle of Restigouche, many ships were sunk or set ablaze, so the idea is that it might be one of these could be the ghost ship. Another tale says it is the ship of the notorious pirate Captain Craig, or conversely that of one of his victims. In one version of the pirate tale, a woman is killed and curses them with her dying breath by saying, “For as long as the world is, may you burn on the bay.”

Of course, there have been many more mundane explanations offered up as well for the phenomenon. Everything from underwater gas releases to rotting vegetation, phosphorescent marine life, and marsh gas, to natural electrical or atmospheric phenomena have been proposed. A popular notion is that the ship is nothing more than a type of mirage called a Fata Morgana, or that it is caused by St. Elmo’s Fire, a natural weather phenomenon that causes a sort of halo of luminous plasma to appear around edges of rod-like objects such as sailing masts. In 1907,Dr. W. G. Ganong, a New Brunswick scholar who became professor of botany at Smith College, Northampton, Massachusetts, said of his ideas along these lines:

Grouping together all the evidence it seems plain. First, that a physical light is frequently seen over the waters of Bay Chaleur and vicinity. Second, that it occurs at all seasons, or at least in winter as well as summer. Third, that it usually precedes a storm. Fourth, that its usual form is roughly hemispherical, with the flat side to the water, and that at times it simply glows without much change of form, but at other times it rises into slender columns, giving an appearance capable of interpretation as the flaming rigging of a ship, its vibrating and dancing movements increasing the illusion. Fifth, its origin is probably electrical, and it is very likely St. Elmo’s Fire. 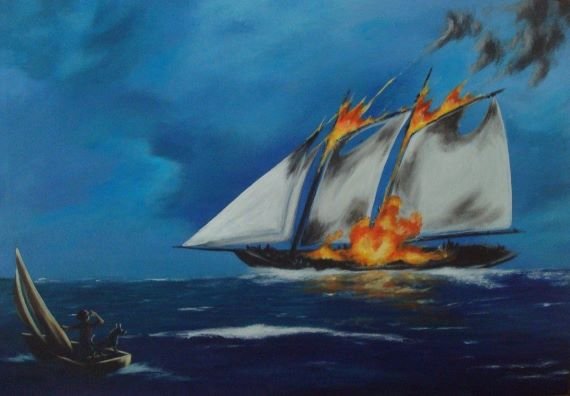 However, St. Elmo’s Fire does not really explain the fact that people see the ship in great detail, complete with ghostly crew, it appears from nowhere and disappears into thin air, and there is also the fact that the phenomenon is attracted to the edges of pointed of cylindrical objects, whereas the Fire Ship is a complete, clear apparition sighted out on open water. Many of the witnesses of the ghostly fire ship are also reliable witnesses such as seasoned seamen or educated people who have lived their whole lives by the sea, people who know what they can expect to see out there and who would not be as likely to mistake these illusions for a burning ghost ship. Locals tend to shy away from trying to explain it, simply accepting it as a strange feature of the landscape. One long-time resident, Peter Fiott, has said of it:

I have seen the Fire Ship hundreds of times. It takes various forms. Usually it is a sailing vessel wrapped in flames. It has also been a shapeless ball of fire, a ship’s lantern, and once in 1906 it was a burning steamer. How do I explain the Fire Ship? There are those who say it is a mixture of imagination and phosphorus, or imagination and St. Elmo’s Fire. For myself, I can’t explain the unexplainable, but I have seen it—yes, hundreds of times.

The mystery of the Phantom Fire Ship of the Chaleur Bay has become a persistent and prominent piece of local lore here, and despite all of the speculation and attempts to explain it we still have no concrete answer as to what causes it. Is this some ghostly remnant from the past, imprinted upon our reality on some inscrutable mission? Is it merely misidentified natural phenomena? Or is it maybe even something stranger altogether? whatever the case may be, it is still unexplained, and the ghostly fire ship of Chaleur Bay still sails on, perhaps until the end of time.

Stonehenge and its High-Level of Strangeness