Sitting out in Lincoln National Forest, near Ruidoso, not far from Santa Fe, New Mexico, is a reservoir that at first might seem to be a perfectly peaceful and placid place. It’s called Bonito Lake, and among locals it is a popular place to go for a day outdoors. Here one can see fishermen, campers, and families having picnics at the lakeshore, making it all seem like a nice little spot for a day out. Yet beneath its placid water Bonito Lake holds a dark secret that many of the visitors might not be aware of, and indeed the very area is pervaded by a grim history of disaster, murder, and hauntings that thrums below the quiet exterior.

In the mid-1800s, the Gold Rush in California and the southwest was causing a major epidemic of gold fever. People from all over the country were rushing in with dreams of striking it rich, with mining camps springing up anywhere gold was rumored to be, and Bonito City, New Mexico, was one of these places. Starting as a simple ragtag collection of dusty miner tents, as more gold hungry people flooded in it grew exponentially, until by the mid-1880s it included many permanent structures such as a schoolhouse, three general stores, a saloon, a post office, a hotel, a boarding house, a blacksmith and even a law office. At one point, Bonito City and Lincoln County was supposedly the most populous place in New Mexico, but it was also a lawless, wild place full of outlaws, thieves, bandits, and other unsavory elements, as well as a place of frequent violence such as shootouts and even a Lincoln County War, but one gruesome incident in particular would stick into the region’s history like a thorn.

In 1885 a miner by the name of Martin Nelson came to town looking to get rich just like everyone else, although many in town saw him as nothing more than a drifter up to no good. As soon as Nelson arrived, there was a wave of thefts, usually small but noticeable in how frequent they were. A lot of people suspected that Nelson was a thief, but no one could prove it. At the time, Nelson was staying at the town boarding house, run by a family called the Mayberrys, where he shared a room with a Dr. William H. Flynn of Boston. According to the tale, one day, Nelson couldn’t resist stealing Dr. Flynn’s fancy watch, but he was caught in the act. Nelson called out to the Mayberry’s and they came running to the room, where Nelson was caught red-handed and panicked. Unfortunately for Flynn and the Mayberrys, Nelson was usually armed, and in his panicked state he fired on them with his .38 caliber rifle, killing Flynn, John Mayberry, Sr., and his two sons, John Jr. and Eddie, as well as wounding Mrs. Mayberry and her daughter Nellie, who tried to flee. Not wanting any witnesses, Nelson allegedly chased them to shoot Mrs. Mayberry in the back and kill her, but for some reason he spared Nellie and let her live. The carnage increased when the saloon owner Pete Nelson (no relation), came running to see what the commotion was about and he was shot and killed too. After this a standoff ensued, with Nelson killing another man, grocer Herman Beck, as he made a run for it. After this, Nelson didn’t get far, either shot by the Sherriff or killed by a posse, depending on the version of the story. At the time it was an absolutely shocking development, one of the worst atrocities the region had ever seen, and historian Lynda Sanchez has said of it:

Even the bloody Lincoln County War with its mayhem and destruction seems a bit pale by comparison to that one night of rampage by Nelson, the man to whom these murders were attributed. The violence, the blood, the macabre scenario that will forever haunt that beautiful lake country is difficult to comprehend. Was it greed only, or someone gone mad at the wrong time? What tipped the balance of sanity and changed him into a devil whirlwind of destruction? There are many theories. It probably was the wantonness and the suddenness of the murders that shocked everyone, she said. During the time of Billy the Kid, there were two sides to that violence and the conflict went on for months and many more were killed, but that situation was a 'war. You knew what to expect. But to have this fiend from hell come at you in the middle of the night must have been indescribable.

This is the main narrative, but details vary in different versions of the event, yet they nevertheless all agree that Nelson went on a deadly shooting massacre, and that after his death, Nelson was unceremoniously buried in a simple wooden box on unconsecrated land outside the city cemetery. In the wake of this horrific bloodbath, the Mayberry boarding house was closed and left abandoned, and it did not take long at all for it to start gaining a reputation as being haunted. People described lights on in the boarding house when no one was there, anomalous noises including disembodied screams and phantom gunshots, and bloody footprints appearing and disappearing. Even scarier were reports that the ghosts of both Nelson and the victims of his murderous crime could be seen lurking about on the property. Those who were brave enough to try and enter the boarding house were said to come out screaming or to go mad from what they had seen inside. The place was considered haunted, cursed, or both, prowled by ghosts and its very walls imbued with its bloody history. 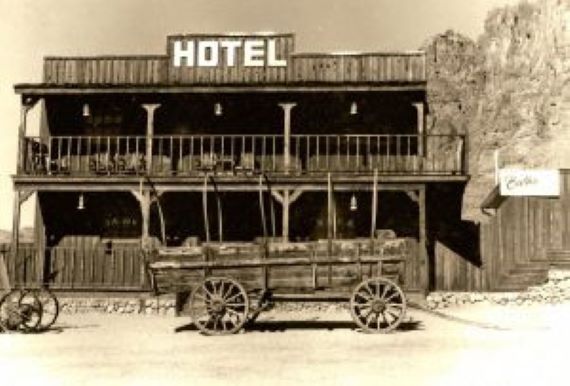 Things went on like for decades, then in 1920 the Southern Pacific Railroad began construction of a dam in the area, which meant that Bonito City was soon to become a lake. The city had already been steadily on the decline, with less and less gold being found and shops closing down one after the other. The remaining residents were told that they had to leave, the remaining buildings either torn down or left abandoned as is to await their watery fate. Eventually, by 1930 the entirety of what had once been Bonito City was underwater, now Bonito Lake. The graves of Nelson’s victims were moved to another cemetery in nearby Angus, New Mexico, before this happened, but Nelson’s body remained.

It is likely that this is why even to this day Nelson’s restless spirit is said to haunt the lake. Visitors have reported seeing the apparition of a man in old fashioned clothing, thought to be Nelson, wandering along the lake shore only to vanish into thin air, and he has even purportedly been seen eerily floating about under the surface of the water. Interestingly, most of the many visitors to the lake are completely unaware that there was once a city beneath the waves here, nor that it was the scene of such a dark piece of local history. Are there mysterious forces surrounding this place? Does this location's dark roots imbue it with supernatural phenomena? Who knows, but it is all an interesting piece of lore and an intriguing supposed local haunting all the same.

From a Marauding Monster to a 40th “Anniversary”