The Mysterious Lady in Red and Other Hauntings at Huntingdon College

What is now known as Huntingdon College, in Montgomery, Alabama, began life in 1854 as an all-female college called Tuskegee Female College. After World War I, it began accepting male students, changing names several times before becoming the private Methodist liberal arts college Huntingdon College in 1935. The campus now boasts more than 50 undergraduate programs of study, 18 NCAA-III intercollegiate athletic teams, and sits on the National Register of Historic Places, well known for its Gothic Revival and Tudor Revival architecture. However, for such a large and bustling campus it also sure does have its share of spooky ghost stories and hauntings.

By far the most well-known ghosts on the campus are its two tales of the “Ladies in Red.” The original Lady in Red tale began back in the 1800s, when the college was located in Tuskegee, where students fearfully told of an apparition that appeared as a young woman wearing a scarlet dress, usually also reported as carrying around a red parasol, and who would wander about the residence hall emanating an eerie red glow. The Lady in Red would allegedly never speak, indeed she seemed to be completely oblivious to onlookers, and seemed to be very lifelike in appearance, sometimes mistaken for a real person before vanishing into thin air. No one was ever able to figure out who she was supposed to be, and then one day the Lady in Red supposedly walked out of the hall, went to the front gate, and passed through it to never be seen again.

A more fleshed out and more famous tale is that of the second Lady in Red, which starts with a student at the college in the early 1900s known only as Martha. She was allegedly from a wealthy New York family, and had been sent there against her wishes because her mother had once been a student. She apparently made quite an impression from the beginning, always wearing red and adorning he room with red curtains and red bedsheets and blankets, never really explaining why she did this to anyone. This made her seem a bit odd to others, and this only added to her shyness and awkwardness in her new surroundings, making it very difficult for her to fit in and make friends. A lot of classmates saw her as being a stuck up rich kid, with several of her dorm roommates at what was called Pratt Hall requesting to be put in another room. People just couldn’t stand to live with her. Even the President of the dormitory moved in with her, as she was an authority figure and had a reputation for getting along with people, but even then the living arrangement didn’t work out.

According to the story, Martha became withdrawn and morose, which only further alienated her. She began displaying some very strange behavior, such as wandering about the halls after lights out and even visiting other dormitories, where she simply sort of ambled about as if in a trance, staring lifelessly at others and lost to her thoughts, always wearing her red robe. Everyone thought it was creepy, with rumors that she had lost her mind, but no one dared approach her to talk to her about it as by this time everyone was a little scared of her and avoided her. Then one day these mysterious nigh time wanderings stopped, and indeed Martha stopped showing up to classes as well. After several days of this, one of her ex-roommates decided to check up on her, but to her shock found Martha sprawled out on the floor of her room dead, her wrists slashed in a suicide. After that people began seeing Martha’s ghost wandering the halls at night, dressed all in red as she had been in life and bathed in a red glow. The Red Lady Martha is said to spend most of her time on the 4th floor, and like the other Lady in Red appears to be very solid until she vanishes or walks through a wall. Pratt Hall is no longer a dormitory, having been converted to faculty offices, a commuter lounge, and the University’s Department of Education, but the Red Lady still appears here to this day. The legend is so popular on campus that there is even an annual “Red Lady Run” held at Huntingdon College, in which sororities paint themselves in red and run around the campus. 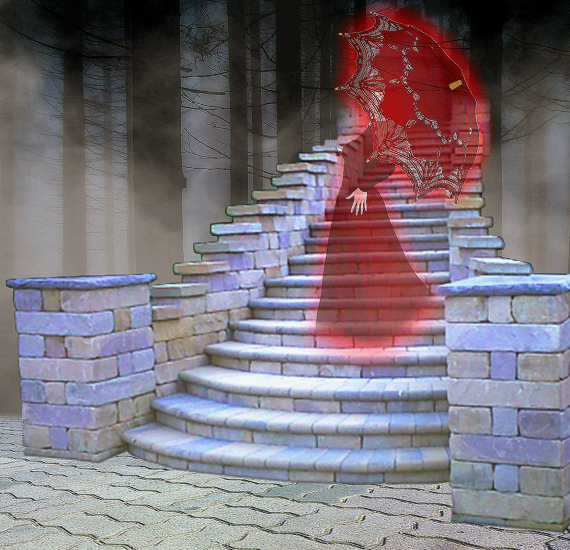 Although the Lady in Red is by far the most famous of the college’s spooks, she is not the only one, kept company by several other alleged spirits. One is a ghost that hangs around at the library and it called “Frank.” No one is quite sure who he was in life, but in death he has made quite the name for himself around campus. Frank is said to be mischievous, filing books away in different places, stacking them in the middle or rows, or laying them out open on tables when no one is looking. He will also turn out lights, whisper in people’s ears as they try to study, or open and close doors. He doesn’t often appear, but when his apparition is seen he takes the form of an older, educated-looking gentleman. Other miscellaneous ghosts on the campus are a young man who committed suicide here by shooting himself and who haunts the green, a little boy who allegedly drowned in the campus pond and lurks about its shore, and a murdered co-ed. Why should this place have so much spiritual energy? Are these spirits drawn to this place for some reason, something compelling them to linger on? Or is it just spooky urban legends? Many locals of the area will tell you that the phenomena are real, and whether they are or not, it is all certainly a good collection of eerie local lore.