Sitting out in Lake Michigan, south of the Upper Peninsula of Michigan and located between St. Martin Island and Summer Island is a windswept, storm-kissed slash of rock called Poverty Island. In the 1860s, this place was in the middle of a huge boom in maritime shipping and commerce, as the area has many steel mills and was connected to the booming Peninsula Railroad. At the time, one of the favorite routes of vessels making their runs was to take the Poverty Island Passage, between Poverty and the Gull Islands, as it was considered to be a sort of short cut, although this was balanced out by the dangers caused by the many shoals of the area. Although a lighthouse was eventually built on Poverty Island and put into operation in 1885, for a long time ships were forced to travel during the days and brave treacherous rocks and shoals. It was in this era when Poverty Island was notorious for sinking ships that one of its most persistent legends would begin, which says that somewhere in the waters off poverty island are five chests full of an estimated $400 million in gold bullion and coins just sitting around waiting to be found.

The most popular origin for the story of Poverty Island’s lost treasure begins in 1863, during the American Civil War. At the time, Union forces were beginning to gain the upper hand in the war, and the cash-strapped Confederates were frantically trying to raise money for their war effort. They allegedly reached out to none other than the French Emperor Napoleon Bonaparte III to request funds. This might seem like wishful thinking until you realize that in that era France coveted the steady cotton crop they received from the South, something it was thought would be disrupted with a Union victory. According to this tale, the Emperor arranged a secret shipment of gold bullion and coins to be brought overland through Canada and loaded onto a ship to be sent down the St. Lawrence River and into Lake Michigan en route to Chicago, where it was to be brought overland down South.

This is where different versions of the story begin to branch off from the main narrative. By some accounts the ship was discovered by Union forces and sunk near Poverty Island, while others say it was dashed upon the rocks while attempting to make a misguided night run, and yet another version says they were attacked by French pirates. Whatever the case may be, the gold either went down with the ship or was hidden on the island in order to be collected later or even thrown overboard to keep it from being captured. At any rate it was lost. In most versions of the tale, the chests, usually said to be five of them, were chained together, making it likely that if one is to find one, they will find all of them.

While this sounds like just an old sailor's legend, there are some historical accounts that somewhat give the story credence. In 1929, a ship passing nearby allegedly snagged something deep down in the water, which when dredged up proved to be the legendary string of chests. Unfortunately for the crew, the anchor chain snapped to send it all tumbling back down into the murk, after which it evaded being found again. In the 1930s, there was also the story of a Karl Jesson, who was the son of the Poverty Island lighthouse keeper. One day, Karl would claim that he had seen a salvage ship out in the water, allegedly excitedly working on dredging something up from the depths, after which the crews could be heard loudly rejoicing, but a storm would come in and sink the ship to send them and whatever they had found back to the bottom. Tantalizing stories like these have stoked the imagination of treasure hunters from all over the world, and one of the most well-known of these is a man named Richard Bennett. 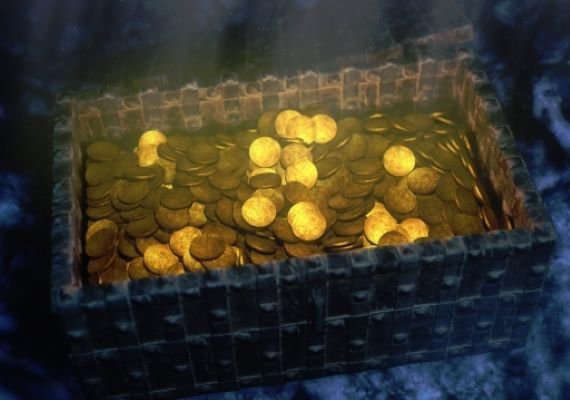 Professional diver and owner of a diving school and shop in the Milwaukee suburb of Wauwatosa, Bennet became fascinated and obsessed with the legend of the Poverty Island lost treasure back in 1968, and has been looking for it ever since. Over the course of decades, he has sunk over $100,000 of his own money in his endless quest, as well as around $30,000 from donations, all the while constantly scouring old news archives for stories, leads, and clues about the treasure. In order to aid his driven search, he has enlisted the best equipment he can get his hands on, including a fiberglass homemade mini-sub to comb the gloomy depths at the bottom. He has said of his search:

I am sincere; this is not a hoax. This wreck has been mentioned in newspapers since 1945, and I wasn`t around to write those stories. Any story that survives 100 years has to have some validity to it. If they survive 100 years, they probably have an 80, 85% chance of being true. The only way to really find this treasure is to have human beings on the sled visually looking at the bottom. It’s cold. It’s deep. The area is very treacherous. But I’m a dreamer, and I’m a gambler. As long as I have those things working for me, I’ll probably continue to do it. It’s like being the first man to climb a mountain. It’s an individual achievement. How can you challenge a man’s mettle any better than on an operation like this?

Is the treasure of Poverty Island real, or is it just myth and legend? Is there a fortune worth of gold lying out there just waiting to be found? It wouldn't be the only supposed lost treasure said to lurk down in the depths of the Great lakes and it surely makes one wonder. For at least one determined treasure hunter it is very real indeed, and time will only tell if there is anything to it or not.