The Mysterious Santa Compaña, the Ghostly Procession of Souls in Spain

Many rural localities of the world have their own strange and spooky traditions, things which are firmly entrenched within the myths and lore of the land. Such legends are very often imbued with the paranormal and forces beyond out understanding, seemingly pure myth, but accepted wholeheartedly by those who see these things as a part of reality as they know it. In the remote, rural areas of Spain there is one such belief that has remained ingrained upon the consciousness and perhaps even the land itself, that of a procession of restless spirits that occasionally goes out on the hunt for new souls to claim.

In many rural areas of the northwest of Iberia, Galicia and Asturias in Spain, as well as some parts of Northern Portugal, there is a mysterious and ancient tradition carried out known as the Santa Compaña, as well as by numerous other regional names such as Estadea, Compaña, Pantalla, Avisóns, Pantaruxada, or Genti of Muerti, and in English mostly referred to as the “All Souls Procession” or “Holy Company of Death.” The roots of the traditions run way back to the Middle Ages, originating from pagan practices carried out by the ancient Celtic culture, which has strong links to certain areas of Spain. There are many different regional variations of the Santa Compaña, but all of them are spooky and greatly feared. 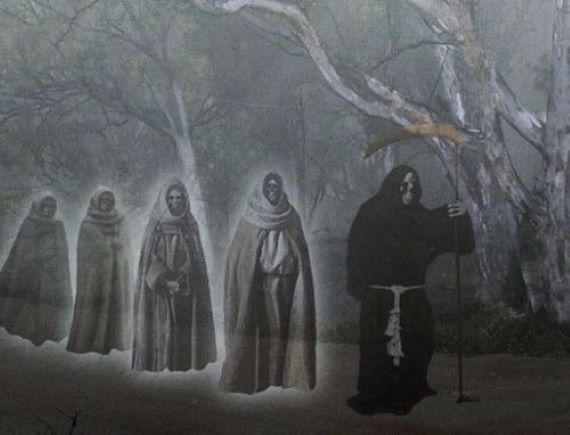 One of the main forms the Santa Compaña takes is a “procession of souls,” barefoot hooded figures that walk in rows holding bells and candles or burning stick of bone, these figures said to be the spirits of the dead, headed by a living person, usually a leader of a local church, who can be a man or a woman and who typically carries a cross or container of holy water, the whole of it said to be accompanied by a thick, unnatural fog. This living person is said to be in a deep trance, at the whim of supernatural forces that compel him to get up to leave his home and begin this mysterious procession at exactly midnight on the night of all Saints' Day and the night of St. John, and making him or her forget what has happened the following day, cursed to carry this out for possibly eternity unless he can break the curse. This person goes out into the wilderness alone at first, but as he or she wanders in the gloom, the souls of the dead join in behind, eventually forming two rows of eight spirits each, as well as sometimes a head spirit called “the Estean.” They are said to be lost souls tainted by sin and locked in great sorrow, their purpose to announce the coming of new souls to join their grim procession, a portent of death, tragedy, or disaster.

The locals of these rural areas where the Santa Compaña is carried out fear the procession, as it means that certain death is coming for someone in the community, looking to recruit more souls. According to the lore, the coming of the procession is preceded by an unnatural wind, creeping fog, and the smell of wax, and animals will become restless or panic when they sense its inevitable approach. The bells the spirits carry will then be heard approaching, or in some traditions chanting that has the power to mesmerize, and all of this is enough to send locals scurrying into their homes to cower in the dark, as to see the procession is to be possibly marked for death because the spirits are only visible to those who are close to death or who have psychic abilities, while others can see only the light of the candles seeming to hover in midair. In some traditions, the spirits will choose some of those who see them and give them a white circle or candle that traps the person’s soul and drags them into the underworld or causes them to join the procession as a lost soul. Others will experience a mysterious illness in the coming days that will cause them to wither away and die. There is also the possibility that the leader of the procession will try to give his holy water and cross, and if one is to accept it then he or she will be free from the curse of leading the procession and pass the mantle to the one who has accepted this “gift.” 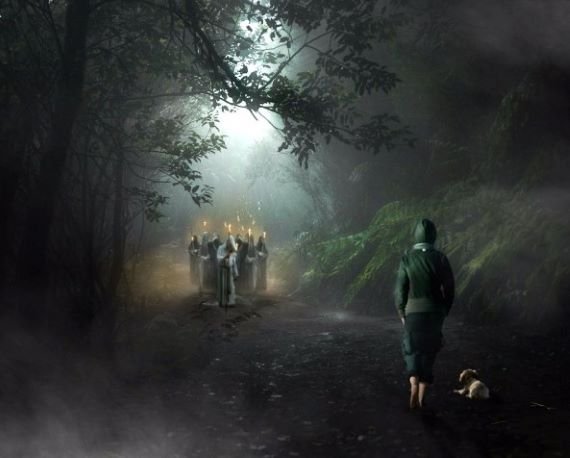 No matter what the particular tradition, they all agree that it is better not to look at the Santa Compaña, but to rather run, hide, or try one of the various ways to protect oneself through magic. The Santa Compaña is so feared that the people of these regions have devised ways to try and protect themselves from the procession. These also vary by region, but one well-known protection is to draw a circle with Seal of Solomon inside a six-pointed star upon the ground with either chalk, salt, or an olive branch, and then to enter the circle and lie face down. If one is quick enough to do this, the procession will pass by and be unable to see or approach the person. Other common ways are to put a black cat in the path of the Santa Compaña, which they will change course to avoid, or to use a warding symbol with one’s hand by closing the fist and putting the thumb between the index and middle fingers, called a “fig sign.”

The Santa Compaña procession will continue through the night, until it ends before daybreak at a stone cross, after which the spirits will disperse and the living one who has led them on the journey will awaken in his or her own house with no memory of what has happened and feeling intense weariness and fatigue. Over the coming days, the places where they have passed will experience death in one form or another, the procession reaping its harvest of souls. It all seems as if it must be purely folklore, but the region is full of witness accounts of these mysterious processions or the death they cause, to the point that they are still greatly feared by rural areas to this day. Is this really just superstitious lore, or is there something more to it? Whether it is myth or not, it is a compelling look into the strange, supernatural beliefs of local people, and a peek into another world.

Former Nunnery With Creepy Ghostly Nuns Is For Sale