The Mysterious Tale of the Real Beauty and the Beast

There have always been those out on the periphery of society who have failed to fit in or belong due to unusual or aberrant physical characteristics. At one time there were words for such people, "freaks," "abominations," and many others. Whereas in this day and age such people would have access to a normal life, this was not always the case, with such people relegated to the status of inhuman monsters. Some of these individuals nevertheless managed to claw their way out of obscurity, and one such case is that if the "Wild Man" who managed to work his way up from a slave, to court jester, to respected nobleman with a bride and happy life, going on to quite possibly have influenced the story of Beauty and the Beast in the process.

The man who would be known as Petrus Gonsalvus, or in Spanish Pedro González, was born in 1537 on the island of Tenerife, in the Canary Islands. He was born with a condition called hypertrichosis, more commonly referred to as “Werewolf Syndrome,” in which the victim grows hair all over their face and body, making them look somewhat like an animal. He was sold from a young age into slavery, his rare condition caught the attention of outsiders, and he ended up gifted to the court of Henry II, King of France in 1547, where he was called a “wildman,” the “man of the woods,” and other unsavory monikers, only exacerbated by the fact that when he first came there, he could not speak, but rather communicated through grunts and growls. Here he was seen as less than human, more of an animal than a man, with court doctors examining him extensively trying to figure out what sort of creature he was. Petrus would be locked away in a dungeon, occasionally brought out in a cage for the amusement of guests and told to act like a wild savage and eat raw meat.

At some point, Henri II decided that he wanted to try an experiment. He decided to free Petrus from that dank dungeon and try to raise him as a normal boy, providing him with a formal education and dressing him in the typical attire of the time. Indeed, Petrus was educated as a nobleman, and during this time the King took quite a liking to him, endlessly fascinated by the fact that, despite his fierce, animalistic appearance, Petrus acted like a normal person and was even more intelligent than average, learning how to talk and interact with people rather well. Petrus learned math, art, Latin, French literature, and even military techniques, and voraciously absorbed all of this new knowledge, further proving that he was not some sort of man-animal hybrid, as had been previously suspected, but rather a capable growing young man. Petrus became a regular fixture of the court, and was soon seen as a nobleman despite his shocking feral appearance.

In 1559, Henri II was killed in a jousting contest, leaving Petrus in the care of Henri’s wife, Catherine de’ Medici, who was not nearly as kind to the boy. She has often been described as somewhat cruel and calculating, slightly unhinged might be an apt description, and for a while Petrus was pretty much treated as an animal once again. However, she then came up with an idea to further experiment on Petrus, deciding to see what would happen if he was married off to a beautiful woman, with the ultimate goal of seeing what sort of offspring they would produce. To this end, as soon as Petrus was old enough, a pretty woman named Catherine, the daughter of one of the castle servants, was assigned to be his bride, by all accounts having no idea what he really looked like until their wedding day, which was also calculated by the Queen. 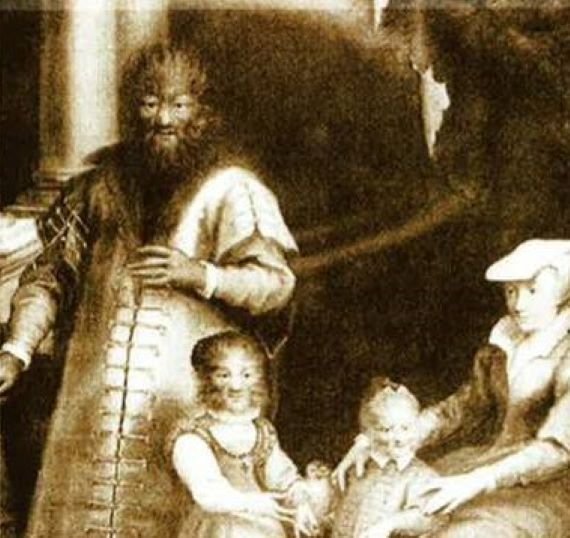 Much to everyone’s surprise, although at first they were simply forced to live together and the woman was horrified, Catherine and Petrus actually ended up falling in love, getting married and their first two children proving to be completely normal in every way, much to the bafflement of the Queen, although their next four kids would exhibit their father’s condition. At the time, the entire family was sent on a tour of Europe, becoming celebrities in the process, coming under the wing of Margaret, the Duchess of Parma, before finally settling down again, ultimately retiring under the care of a Duke in Italy. During their time on tour, they are credited with starting the phenomenon of circus freakshows in France, yet Petrus and his similarly afflicted children never really did shuck off the popular conception that they were little more than tamed and trained animals. Nevertheless, they lived in relative luxury, with one of the afflicted daughters, Antoinetta, given to a noble family in Bologna, Italy, and the others also ended up living with noble families.

Records of the family’s later life are sketchy. It is known that Petrus attended the baptisms of two of his grandchildren, but little else is known from the time he got off the tour circuit until his death in 1618. His story is thought to have perhaps been one of the inspirations for the classic story Beauty and the Beast, written by French Novelist Gabrielle-Suzanne Barbot de Villeneuve in 1740. It is unknown just how much this strange man's story influenced this great work, but it certainly seems to fit, and this tale of a mistreated freak who came to prominence and married a beautiful woman to live a normal life is a colorful and curious historical oddity at the very least.