There have been many strange alien cases lost to history that involve people of prominence, and Cordell Hull is certainly no nobody. An American politician from Tennessee who served as the longest-serving U.S. Secretary of state ever, from between the years of 1933 to 1944 under President Franklin Delano Roosevelt during most of World War II, during his career he was also an elected U.S. Senator from 1931 to 1937, served as chairman of the Democratic National Committee, spent 24 years in the House of Representatives, received the Nobel Peace Prize in 1945, and was instrumental in establishing the United Nations, he was about as well-respected and successful as can be. Yet, as with many people within positions of power, Hull has attracted some rather strange stories about him, and one of these concerns the time he supposedly kept real aliens in a secret bunker below Capitol Hill.

The whole bizarre affair came out when in 2002 Willian E. Jones, the director of the Ohio branch of MUFON, received in the mail a curious letter from a woman named Lucille Andrew, the daughter of Reverend Turner Hamilton Holt, which had originally been sent to the Center of UFO Studies in 1999. Holt had been Hull’s cousin and good friend, and had served as a minister at the Shenandoah Christian Church in Greenwich, Ohio, as well as being active as a community leader. According to Lucille, Holt had told her, her sister, and her mother about a very strange experience he had had one day with Hull, which he had related because he didn’t want it to be lost.

According to her father, one day in 1939, Hull had contacted him with some urgent business, telling him that he had something he needed to show him. Curious, Holt had gone to meet his cousin, after which he was solemnly told to take an oath of secrecy, which he did. Hull had then allegedly brought Holt down below the Capitol Building, in Washington DC, where they followed a warren of imposing tunnels to a massive, cavernous room in the center of which sat four large glass cylinders. At this point Holt still had no idea what was going on, but as Hull brought him closer to the enigmatic glass containers he was treated to an “amazing sight.” Within each container was supposedly the dead body of a humanoid creature floating within what seemed to be formaldehyde. Hull also allegedly showed him another room holding a large, round metallic craft of some sort, which he said was the creatures’ spaceship. Holt would then explain how this was a crashed alien craft that had been retrieved along with its dead crew, and that they had to be kept secret because it would “start a panic if the public found out about it.” Lucille would say “My father wanted my sister and I to make this information known long after he and Cordell were dead, because he felt it was a very important bit of information.”

Of course, with such a wild claim, there was some skepticism. After all, this could have been any crackpot out there spewing wild yarns, but when MUFON investigated the letter, they found out that not only was the person really the daughter of Holt, but that her sisters also remembered hearing the exact same thing. Jones would offer further details on all of this, writing:

Unfortunately, Lucile said that she was too young to really pay much attention to what her father told her but Allene, the mother of Eloise, the co-author of this story was told the same story as her sister. Both sisters assured us that they remember the stories independently. Reverend Holt described the entities in the glass jars as "creatures, a term common for his day..." He never referred to them as "aliens" or "extraterrestrials." He never said where they came from. Lucille stated that his experience happened in the "late 1930s," probably 1939. The material that was nearby the less than four feet tall creatures was described as "silver metallic." She also remembers him referring to the material as being a "vehicle" that appeared to have been taken apart and was "in pieces." He said the color of this material wasn't a color that he had seen before, but for the lack of a better word he used "silver." Reverend Holt was not the sort of person to make up such a wild story and, the sisters feel that by telling the story they are following their father's wishes. 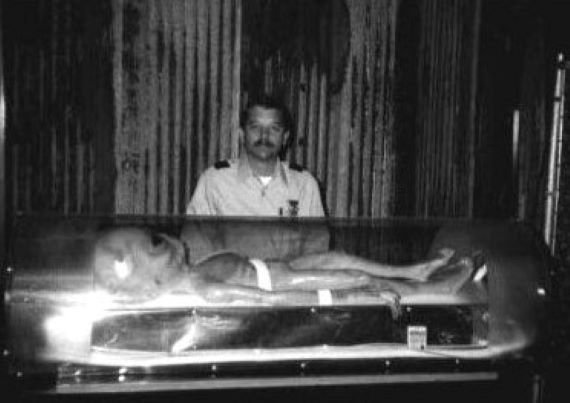 However, when Hull’s extensive memoirs and journals were checked there could be found no reference to this event ever happening. Indeed, nothing in the entire Library of Congress could be turned up that made a single mention of any of this, but that doesn’t mean that it didn’t happen. Indeed, Jones found the story to be very compelling, finding no reason for why Hull or Holt should lie about such a thing, nor why Holt’s family would conspire to make up this elaborate tale of aliens at Capitol Hill. Jones would continue to look into it, and conclude that the case deserved further investigation, saying:

Barbara A. Wolamin, the curator U.S. Capitol building, chuckled a bit after being told the story. She said she had never heard about these creatures being stored at the Capitol, but she did confirm there was a sub-basement that was divided into storage rooms back then. She said that the building had been significantly changed over the years, so in a small way, part of Reverend Holt's story checked out. After Cordell Hull left government service he wrote his memoirs in a two-volume book set. No reference to this story appeared in these pages, in his papers in the Library of Congress. Numerous experts and libraries were contacted and there has been no confirmation for the story. If four alien bodies and other world technology were retrieved in 1939, what would that do to our interpretation of the U.S. Government's involvement in UFO research? One would assume prior knowledge would have made the government ready for an event like Roswell and that the Roswell retrieval was more efficient because of that. This is a story that truly deserves further investigation.

It is all pretty wild, and in the end there doesn't seem to be really all that much to support it other than the family's say so. Was this a joke passed down by Holt, and if so, why? It seemed to have been circulating in the family for some time, so what would be the point of spinning this yarn and making them believe it was all true? Was there maybe perhaps something to this all, and if so what? The case is frustrating because there is so little further information and so little to go on. We have this amazing story of dead alien creatures being held right there under the Capitol Building, but no way at all to corroborate it or investigate any further, leaving it strictly in the realm of speculation and bordering very close to the domain of urban legend and fantasy. The final answer may never be known, and it is perhaps best to take this one with a grain of salt, but it is still a weird little historical oddity and a bonkers tale nevertheless.

The Crashed UFOs That Probably Weren’t at All