The Strange Case of a Legally Haunted House

Can a house be legally haunted? Well, it appears that yes it can. Our story here begins with a beautiful 5-bedroom Victorian waterfront home in Nyack, New York, where in the 1970s a woman by the name of Helen Ackley and her family lived an at first peaceful, content life. At some point, they began experiencing some intense poltergeist phenomena in the home, with moving objects, lights turning on and off, anomalous noises and footsteps, the whole none yards. Her grandchildren would also allegedly receive “gifts” from the ghosts in the form of baby rings that would then mysteriously vanish as suddenly as they appeared. Other members of the family would also receive various trinkets and coins that would similarly come from nowhere and then vanish again. Ackley claimed that an unseen presence would also shake her daughter’s bed nearly every night at the same time, and at one point she herself saw the apparition of a man in old fashioned clothes watching her as she painted a wall. She would say of this:

He was sitting in midair, watching me paint the ceiling in the living room, rocking and back forth. I was on an 8-foot stepladder. I asked if he approved of what we were doing to the house, if the colors were to his liking. He smiled and he nodded his head.

She also claimed that there was more than one ghost on the premises, including that of a Navy Lieutenant from the American Revolution. Neighbors also reported hearing and seeing strange things at the house, as did visitors. The fiancé of Ackley’s daughter Cynthia once stayed at the home and said of his own strange experience there:

Cyn had already fallen asleep and I was drifting. Then I heard the bedroom door creak, and the floor boards squeak. My back was to the edge of the bed. Suddenly the edge of the bed by my mid-section depressed down, and I felt something lean against me. I went literally stone stiff! I was speechless and could hardly move. I was able to twist my neck around enough to see a womanly figure in a soft dress through the moonlight from the bay windows. I felt like she was looking straight at me. After about minute, the presence got up and walked back out of the room. I finally relaxed enough to shake my wife out of sound sleep acting like a toddler who just had a nightmare.

Ackley’s story would be published in several newspapers, as well as Reader’s Digest, after which it was included on a walking tour of the city of Nyack as a haunted house. She eventually put the house on the market with a company called Ellis Realty, but failed to mention the hauntings to prospective buyer Jeffrey Stambovsky before he entered a contract to purchase the house in 1989. Stambovsky apparently was from out of town, and had no idea about the local lore on the Ackley house, completely unaware that it was supposed to be haunted. When he inevitably learned of its ghostly past, Stambovsky moved to file a lawsuit on the grounds that he had been mislead and was the victim of misrepresentation on the value of the property in what he called “ectoplasmic fraud,” seeking an action requesting rescission of the contract of sale for damages, and demanding his $32,000 down payment on the purchase price of $650,000 back. 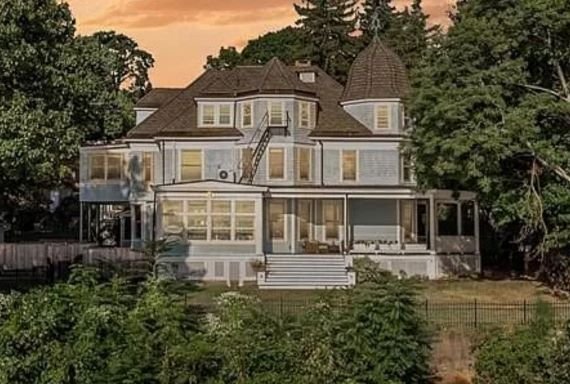 The case went ahead in the New York Supreme Court, Appellate Division, and it was a media circus from day one. It all went back and forth, with New York at the time under the property law doctrine of caveat emptor, or “buyer beware," so Mr. Stambovsky’s motion was initially dismissed, but he appealed and then the appellate court would reverse this, saying, “the most meticulous inspection and the search would not reveal the presence of poltergeists at the premises or unearth the property's ghoulish reputation in the community.” The final decision was that, although the state did not explicitly say it believed in actual ghosts, they deemed the house to be for all purposes legally haunted, saying “having reported [the ghosts'] presence in both a national publication, and the local press, defendant is estopped to deny their existence and, as a matter of law, the house is haunted.” The ruling was not without its critics, with one critic saying:

With this verdict, the New York Supreme Court created a dangerous precedent. The house on the Hudson is haunted. That is a legal fact. In her book “The Law Is a White Dog” [Princeton University Press, 2011], scholar of American legal history Colin Dayan commented that Rubin’s conclusion “was more terrifying for some than if he had declared ghosts real. Instead, Rubin posited a reality independent of any conception of what is real” [pdf, p4] In effect, he had transmuted the presence of an ostensibly fictitious ghost story into a legal reality and proven that, at least in a legal context, the language we use to describe the truth is more important than the truth itself.

The house would fall under a legal term called a “stigmatized property,” meaning a property that has some dark or unsavory history that impacts its value above and beyond its physical state and appearance, but in this case, it was ruled that whether the house was haunted or not, the property owner was under no duty to disclose the haunting to potential buyers. Stambovsky would thus not only receive no damages, but since he failed to show up for the closing, he forfeited the entire down payment. This did not stop people from suddenly wanting to buy it. Shortly after the trial there were numerous offers for the property, and in the meantime the unique case, now commonly known as the “Ghostbusters Ruling,” would see it printed in law textbooks on contracts and property law, and widely taught in U.S. law school classes. Interestingly, no one who owned the house after that reported any paranormal activity, and the property was sold on Jan 8, 2016 for more than $1.7 million. It is all a rather weird story, and now you know that there is a precedent that a house can be legally haunted.

The Matter of Paranormal Mist and Fog – and of Strange Creatures