The Strange Case of the Martian Monkey

It had started out as a normal night for police officer Sherley Brown and his partner, another hot summer July night near the town of Austell, in the U.S. state of Georgia. It was a quiet, rural area where not much ever usually happened, the two typically using the time to chat or to merely watch the night and lane lines go by. Yet on this evening they were about to turn a bend and come across a strange tale, and the night was about to turn out to be one of the most bizarre they’d ever experienced, complete with UFOs and what seemed to be a dead alien.

It was July 8, 1953, and Brown and partner were just outside of Austell, just north of Atlanta, driving along the Bankhead highway. As the two officers rounded the bend, they had to stop because there was a pickup truck sitting practically in the middle of the road, surrounded by three very agitated and panicked looking men. When Brown got out to approach them, they identified themselves as a two town barbers named Ed Watters and Tom Wilson, as well as a local butcher by the name of Arnold Payne. The men were very excited, blabbering away talking over each other and obviously breathless and frightened. When Brown told them to calm down, he was able to get them to explain what had happened and this was far from the crime the police officer had been expecting. 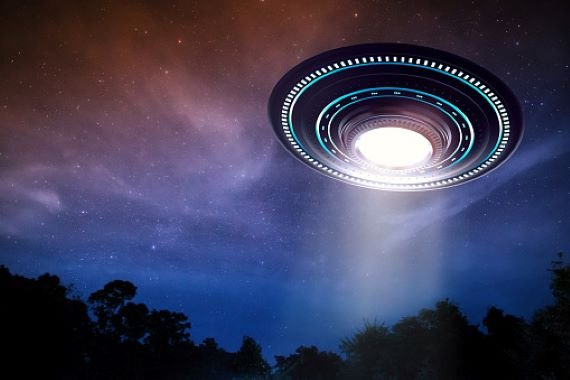 The men told the police officers that they had been driving along the quiet rural road when then had turned the same bend to see a glowing red flying saucer hovering there over the asphalt. When they had slowed down to gawk in amazement, they had noticed two small bizarre creatures about 2 feet tall lurking about in the bushes, one of which had jumped out right in front of their truck to be hit, while the other scurried off to board the UFO, which then turned blue and sped off into the night, shooting out flames as it did so to scorch the road. They also claimed that when they had stopped the car, they had found that they had not only hit the strange creature, but that it was lying there dead on the road. Brown did not believe one bit of this until they showed him evidence in that the highway was indeed scorched with what looked like very high heat, and even weirder was that they still had the dead alien. Brown took a look at it and could see that it was hairless and pale, with a misshapen head and round oversized eyes. It was hideous and obviously not of this world, so Brown was forced to concede that they might be telling the truth, reporting it to headquarters.

It did not take long at all for the story of the UFO and dead alien to get out into the wild, and soon the police station was being called by the news, the Air Force, and dozens of other people who claimed to have seen lights in the sky and strange creatures scampering about on that very same night. In fact, the police station was being deluged by such calls, and when it hit the news the next day it was the talk of Atlanta, with many people truly believing they were in the midst of an actual alien invasion, only further fueled by numerous images of the creepy dead alien body splashed all over the news. In the meantime, a local veterinarian took a look at the body and was unable to identify it as any animal he knew of and saying it looked “not of this world,” which only served to create more panic and stoke the flames of a growing mass hysteria and media frenzy. People were losing their minds.

As all of this was going on, the creature now being called “The Martian Monkey” was taken to Emory University to be examined by two anatomy professors, who quickly saw it for what is really was. It would turn out that this was no Martian monkey or alien creature, but just a normal monkey, a rhesus monkey to be exact, that had been shaved and made up to look weirder than it was, with one of the professors remarking, “If it's from outer space, they haven't invented anything new.” The three men who claimed to have killed the alien then quickly confessed that it was all a big prank that had gotten out of control. They had then gone about somehow getting a dead monkey, shaving it, and chopping off its tail, and adding some green food coloring for added bizarreness, after which they had gone out to that highway and burned scorch marks into the asphalt using a blowtorch to give it an added layer of realism.

Even after this revelation it took some time for people to begin to calm down and accept that they weren’t being invaded by aliens, and in the meantime, the three responsible were charged with animal cruelty, managing to get off on a technicality. They were ultimately slapped with just a $40 fine for obstructing the highway and further dogged by people calling them the Monkey Men. They ended up sort of dropping from the radar, with the monkey itself ending up in the possession of the Georgia Bureau of Investigation mini-museum, where it can still be seen on display to this day. It is all a whirlwind of weirdness, and just goes to show how hoaxes and information can sometimes take off to accrue a life of their own. This sort of thing goes on all the time even in modern times, and forces us to keep our heads straight and look at spectacular claims with a critical eye.