The Time a Circus Showman was Cursed by His Own Freaks

In the late 19th and early 20th centuries, circuses were all the rage in America. Here there were astounding acts that captured the imaginations of the masses, and this was a major, dominant form of entertainment back in the day. Back in the 1900s, the search for new and unusual circus sideshow attractions was never-ending, with various promoters constantly on the lookout for anything exotic, strange, or downright grotesque. The weirder, the better, and many of these were happened upon by chance in faraway lands, where there were often new and unusual people that could be exploited for the crowds. One such case was that of the French dentist, explorer and naturalist Dr. Eugene Bergonier, who in 1924 was in a region called the Sahel, a semi-arid band of land stretching across Sub-Saharan Africa. Here he first encountered a tribe called the Sara Kaba, which would change the course of his life, and possibly his death as well, for it seems they brought back with them ancient black magic.

Bergonier was not in Africa looking for sideshow acts. In fact, at the time he had no circus experience at all, and was rather there on an expedition for the French auto maker Citroen-Peugeot in order to show the feasibility of crossing Africa with motorized vehicles. He was an explorer and naturalist at the time who had made a name for himself with his expeditions around Arica, not a showman, yet the Sara Kaba tribe fascinated him. Once of their striking features was their custom of inserting wooden discs into the lips in order to stretch them out to truly inhuman proportions, eventually making their mouths reminiscent of a duck’s bill. He was so fascinated with the tribe that he began to have a vision of bringing them on a tour to show them to the world as an ethnological exhibition, and so in 1929 he went back to the tribe and convinced some of them to come with him, with Bergonier acting as their manager. 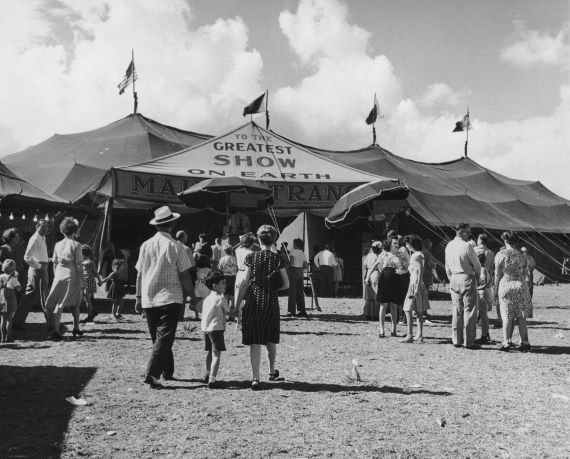 They were shown in Montevideo, Uruguay for some time before, then to Paris, and then in 1930 were brought to America, where they became an absolute sensation. They caught the attention of the Ringling Brothers, Barnum and Bailey Circus, who recruited Bergonier to show them as part of the circus’s “African Village” exhibit. This exhibition was every bit as exploitative, tasteless, and insensitive as one would imagine. Here there was a tent with various areas made up to look like African villages or jungles, populated with either real natives brought from far flung regions or actors hired to play them. This was sadly fairly business as usual at the time, but the exhibit was more like a human zoo than anything else, these people put on display for the wonderment of audiences who had never seen real African natives before, and it was all highly sensationalized. The natives were often billed as “ferocious savages” or “missing links” and told to act fierce and primitive, with actors sometimes playing the role of white explorers engaging them in battle or being captured by them and boiled in pots.

To make the Sara Kaba tribe fit in with this motif, there were some adjustments made. For instance, "Sara Kaba" was deemed to be too plain, so circus spin doctor and press agent Roland Butler came up with the name “Ubangis,” thinking it sounded more “African.” The Sara Kaba were then exhibited as the “Ubangi Duck-Billed Savages,” with gaudy giant posters depicting them as aggressive warriors in a rain forest, despite the fact that they were actually a peaceful tribe from an arid, Sub-Saharan region. During the era it was all par for the course for this racist, sensationalist, and misguided exhibition, and they toured all around America like this, eventually also in other countries such as England and Germany, and they would pass on to the Al G. Barnes Circus in 1932.

Throughout all of this, Bergonier was making money hand over fist off of his “savages,” but the Sara Kaba themselves were not happy with the arrangement. Although they were paid for their work, they accused him of ripping them off and skimming off their bottom line, and this got to the point where they would get into heated arguments. It is said that on one occasion the Sara Kaba threatened his life, warning him that they were going to curse him with African witch doctor magic. This allegedly absolutely terrified Bergonier so much that he ran away to live in Sarasota, Florida, where he hoped he could avoid their foul black magic. He apparently truly believed that they had cursed him, and rather strangely almost as soon as he arrived in Florida he came down with a mysterious illness and died. When doctors looked at him they came to the conclusion that he had died of septic pneumonia caused by an infected pimple on his leg. This was seen as rather odd, and the rumors that he had been cursed by his charges took off, only further fueled when the Sara Kaba admitted that they had caused his death with black magic.

It is impossible to know whether Bergonier was really killed by black magic, but it does certainly make for a spooky tale. Whether there was anything supernatural going on here or not, it is all a peek into another era, with totally different views of things when compared with the present. It is amazing to think that in that era this was all so normal, the exploitation and objectification of these people a perfectly legitimate form of entertainment. These were the days of so-called "human zoos" and it is almost mind-boggling to even think about it today. Did Bergonier perhaps bite off more than he could chew, and anger the wrong people? We will probably never know, but it is a weird and often tragic glimpse into the past, and a strange historical oddity all the same.