The Weird Tale of the Birdman of Stirling Castle

History is populated by mad scientists and inventors. They have driven all manner of bizarre tales and legends, often with the truth buried in the mists of time. There are countless bizarre figures such as this, their stories causing bafflement to this day. Here we will look at a self-proclaimed alchemist of the 16th century, who besides claiming he could create gold from nothing, also claimed the ability to fly, perhaps even successfully being the first human being to do so.

Back in the 16th century there was a very interesting character in the court of James IV of Scotland. The man called John Damian de Falcuis was an Italian alchemist, and self-professed master of medicine, who had one day appeared in the village of Stirling a penniless drifter hawking himself as a doctor and worker of wonders. What he lacked in money, he supposedly made up for in sheer charm, ambition, and the gift of gab, and he somehow convinced King James IV to let him into his court. This is thought to have been largely due to the incredible promises Damien offered as a practicing alchemist. He told the King that with the right tools and ingredients he would be able to produce gold from base metals, making James IV rich beyond his wildest dreams, as well as amazing medicines that would cure every affliction. According to Damien, all he needed was the money and the resources, and King James IV would provide these in spades. 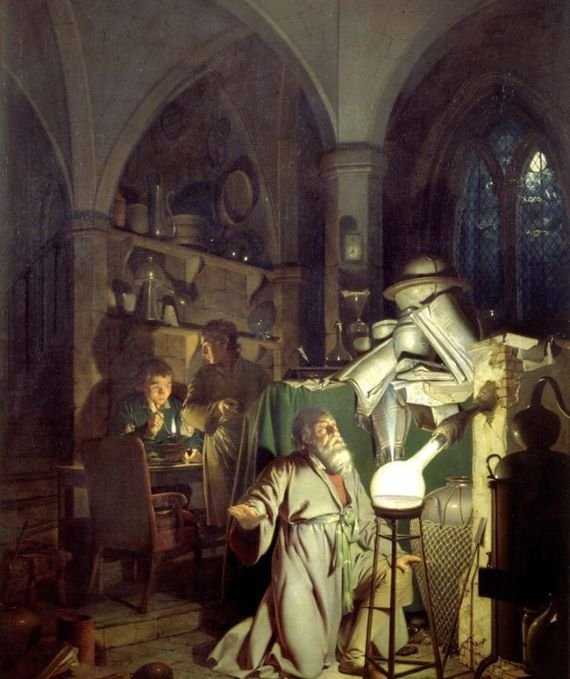 King James IV went about having several alchemical furnaces constructed at Stirling Castle and Holyroodhouse, where Damien got to work on crafting what was called the quinta essentia, the fifth element, also called aether. At the time this was considered to be a mysterious material that fills the region of the universe above the terrestrial sphere, permeating the whole of the known universe, and it purportedly had all sorts of effects on the natural world and the rules of reality. If one could harness the power of this aether, one could potentially twist natural laws to their own ends, including, say, turning lead into gold and creating the famed and legendary Philosopher’s Stone. It was a major goal of alchemy at the time, sort of considered the Holy Grail of the field. There were many rumors that Damien was coming along nicely in his work, to the point that King James IV considered him a favorite, even appointing him the position of Abbot of Tongland, all while throwing endless money at the project, as well as the many mysterious ingredients he required, such as aqua vitae, quicksilver, sal, ammoniac, alum, litharge, orpiment, saltpetre, sliver, sugar, sulphur, tin, verdigris, vinegar and white lead, some of these very expensive and not easy to come by at the time.

The problems for Damien started when all of this money was being spent, yet he was not producing any of his promised gold. King John IV was getting impatient, and Damien knew that he had to provide some sense of progress, which he did in the most bizarre of ways. In 1507, Damien made the bold claim that he possessed the power of flight, and that he could fly from Stirling Castle all the way to France using his deep understanding of the elements. To do this, he claimed that he had used his knowledge of alchemy to devise a pair of magic wings that could defy the laws of gravity with alchemical recipes. This created a lot of excitement within the court, so when the day came for Damien’s little experiment there was a very large crowd of people who showed up.

Damien appeared at the top of the castle, decked out in a flying rig featuring a set of wings fashioned from alchemy-imbued bird’s feathers and according to him based upon Leonardo Da Vinci’s own designs. At this point, he seemed just about as confident as could be, much to the delight of his audience. He then strutted about and climbed to the very highest point of the castle. As those down below looked on with awe, Damien hurled himself into the air, and the most popular account has it that he immediately plummeted to earth into a dung heap or midden to break his leg. Undeterred, he would supposedly claim that his failure had been due to the feather he had used. You see, he had hoped to use eagle feathers, but when those had not been available had resorted to using hen feathers. This had been a mistake, he said, ruining his plan as according to him “hens covet the middens and not the skies.” Nevertheless, Damien became a laughing stock, known as "The Birdman of Stirling Castle," his credibility crushed and ruthlessly mocked by the court poet William Dunbar in the poem A Ballad of the False Friar of Tongland, How He Fell in the Mire Flying to Turkey. After this, Damien sort of faded into history, but it is known that he worked at the court until 1513, after which he was released with a generous pension. We are left to ask, was this all really a failure, or was Damien perhaps more successful than we have been led to believe? 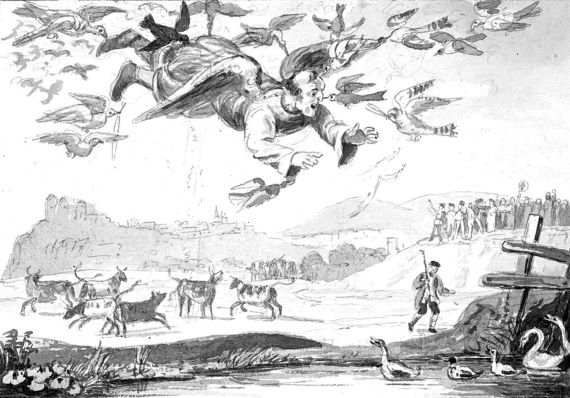 In more recent times, a reevaluation has shown that the mad alchemist might have managed something that was unheard of at the time, actual human flight. Charles McKean, professor of Scottish architectural history at the University of Dundee, has looked at the layout of the area and come to the conclusion that Damien’s flight might have worked to an extent, making it a groundbreaking achievement for the era, and it was only written off as a failure due to jealousy from his enemies such as Dunbar, who buried the truth out of spite and jealousy. McKean says:

To obtain the best uplift for his long journey, Damian flew off the west side of the ramparts’ highest point… To the repeated scorn of the poet William Dunbar, he landed in a midden and broke his thigh bone. He was ridiculed and the attempt dismissed. Anyone looking over the west parapet of Stirling Castle would realize that someone tumbling down the rock at that point would end up very dead. Moreover, the royal gardens lay at its foot. Although the exact processional route between castle and gardens remains unclear, this was no place for a midden. A 1702 plan of the town, on the other hand, indicates the nearest midden half a mile away, beyond the current Smith Art Gallery. If that was the one in which Damian landed, there is but one conclusion: the wings worked. He didn’t reach France, of course, but I believe his flight should be regarded as an historic success.

McKean believes that with a little more time and resources, Damien’s flying rig could have very well worked just as promised. This would have made it an amazing, groundbreaking achievement at the time, beating out Otto Lilienthal, the first man to ever demonstrate routine controlled gliding flight in 1891 by centuries, and perhaps proving that the alchemist was more than just a charlatan and trickster. What really happened here, and how much of the story is really even true at all? We may never know, but it is a fascinating look into the past, and whoever John Damien was, he has certainly created quite the strange mystery.