Wild Wolves on the Loose in England? Or Something Even Stranger?

You may have seen the recent article from England's Gloucester News concerning sightings of what appear to be nothing less than wolves on the loose - in England. Its title: "Wolf seen crossing M5 by lorry driver at 4 am." The article begins: "More wolf sightings have been reported and the latest comes from a lorry driver who saw the creature when on the road during the early hours of a wintry January morning. The wolf was seen crossing the M5 at around 4am between junctions 12 and 13. After the initial surprise to the lorry driver of what he had seen, he went home and looked online to confirm what he thought it was. The lorry driver spoke to wildlife enthusiast Frank Tunbridge, 73, who lives in Podsmead." It's important to note that the wild wolf is believed to have become extinct in England centuries ago. The History of Wolves in the UK website state: "The campaign against wolves by Edward I and subsequent nobility was devastating to the wolf population and references to them diminished. By the late medieval period they were very rare and It is generally accepted that wolves were extinct in England by the 15th century. They went on to survive longer in Scotland – official records indicate that the last Scottish wolf was killed by Sir Ewen Cameron in 1680 in Killiecrankie (Perthshire) but there are reports that wolves survived in Scotland up until the 18th century." 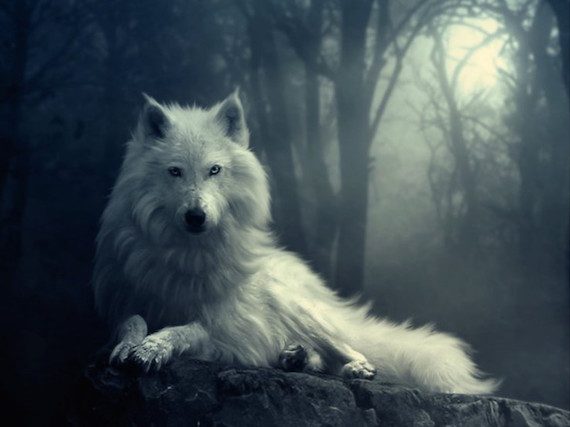 It may come as a surprise to learn that wolves - or wolf-like animals - have been seen in England on more than a few occasions. It gets even more controversial when it becomes clear that some of the animals seem more like werewolves than wolves. Yes, really. In April 2007, the Stafford Post newspaper ran an article that said: "A rash of sightings of a ‘werewolf’ type creature prowling around the outskirts of Stafford have prompted a respected Midlands paranormal group to investigate. West Midlands Ghost Club says they have been contacted by a number of shocked residents who saw what they claimed to be a 'hairy wolf-type creature' walking on its hind legs around the German War Cemetery, just off Camp Road, in between Stafford and Cannock. Several of them claim the creature sprang up on its hind legs and ran into the nearby bushes when it was spotted"

There was also a Cannock Chase-based scout-leader, who had an encounter with the creature, and right in the heart of the cemetery: "It just looked like a huge dog. But when I slammed the door of my car it reared up on its back legs and ran into the trees. It must have been about six to seven feet tall. I know it sounds absolutely mad, but I know what I saw." It’s intriguing to note that although the 2007 wave captured significant attention, and for a period of no less than three or four months, the area had been very briefly hit by a very similar wave in the previous year, 2006. For example, early on June 28, 2006, numerous motorists driving to work on the M6 Motorway reported seeing a large, wolf-like animal racing across the six-lanes of the Motorway, at the height of the rush-hour. The Highways Agency looked into the matter quickly and in concerned fashion. They came up blank and baffled.

Certainly, the most fascinating account came from a man named Jim Broadhurst, who contacted me when my comments and observations on the beast were published in the Chase Post in 2007. According to Broadhurst, on a bright, summer day in late June 2006 he and his wife were taking a leisurely and pleasant walk through the Cannock Chase woods when they saw, at what he estimated to have been a distance of around 150 feet, a very large wolf making its way through the trees. Broadhurst said that initial amazement and excitement were rapidly replaced by nothing less than overwhelming fear. There was a very good reason for that: the animal suddenly reared up onto its hind limbs, and stared intently in the direction of the petrified pair – making it abundantly clear it had seen them, and – as Broadhurst speculated – wanted to let them know it had seen them.

As they watched, frozen to the spot, the "upright wolf" as Broadhurst described it, backed away, further into the heart of the woods, and keeping its eyes firmly fixed on the pair until it was finally lost from sight. The Broadhursts, very understandably, wasted not a second in fleeing the area and heading for the safety of their car. They stayed silent on their encounter until 2007, when the similar events of that year prompted them to finally speak out publicly. A few more reports trickled down, but by 2008 the wolves were gone. Now, though, as the story at the top of this page suggests, the wolves of England are back.

“Zombie Fish”, Pheasant and Frog Presumed Extinct Have Been Rediscovered