An 8th grader found an ancient Tyrannosaurus rex fossil while hiking in Boulder County, Colorado last month on March 12th. Jonathan Charpentier noticed something shinny on the ground so he picked it up, not knowing that it was an ancient dinosaur fossil from millions of years ago.

In an interview with CBS4, Charpentier described how he found the fossil. “I never expected anything like that,” he said, adding, “It was shiny, and it caught my eye, so I picked it up, but I had no clue that it would be a dinosaur tooth. When I got home and washed it off, then I knew it was not a rock, but something else.”

He then decided to contact the Denver Museum of Nature and Science, “I couldn’t believe it at first, I thought, ‘There’s no way it could be something that interesting’, but something that I felt said, ‘Send an email to the museum and see if they say anything about it.”

It was definitely an interesting find as it was an ancient tooth belonging to a Tyrannosaurus rex that dates back about 68 million years. 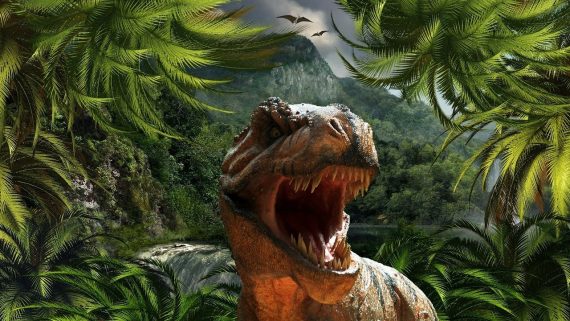 The museum’s dinosaur curator Joe Sertich explained how Colorado is a hot spot for finding fossils belonging to the Tyrannosaurus rex. “Based on the area where this tooth came out it’s what we call the ‘Laramie Formation’ which is between about 68 million and 68 and a half million years old, so it’s about 2 and a half million years before dinosaurs went extinct,” he said, adding, “This is one of the last dinosaurs that lived here in Colorado.”

Sertich went on to say that dinosaur fossils are pretty much everywhere in the Denver Metro area and that discoveries are made every couple of days but not many of them are reported despite the museum encouraging everyone who finds ancient fossils to contact them. “Turning in small fragments can lead to huge fossil discoveries,” he noted. And Charpentier offered his advice for those who spend time outside, “Be on the lookout for these things, because you can really find them anywhere.”

The ancient tooth is now on display at the museum in “The Prehistoric Journey” exhibit that also includes many other fossils uncovered from the area.

Charpentier’s important discovery has triggered an upcoming larger exploration of the area. “It’s probably going to kick off a lot of new research, so we’re going to go back out to this area, maybe with Jonathan, and we’re going to collect more bones and hopefully there’s more of a T-Rex out there waiting for us to dig it up,” Sertich stated.

A picture of the fossil as well as a video about the discovery can be seen here.