An Ex-Marine and His Bizarre Alien Encounters

Some people just seem to draw strangeness to them. One area where this can be seen are so-called "contactees," those unique individuals who, for whatever reasons, seem to attract UFOs and aliens. There are numerous stories along these lines, each more bizarre than the last, and they leave us struggling to know what to make of them. One very weird such case comes to us from an ex-Marine who has been continually visited by alien beings and who says that it is an ominous sign of things to come.

Terrell Copeland, of Suffolk, Virginia, is not the kind of person one would think would make up far-fetched stories. A former United States Marine, he has long been considered by friends and family to be a no nonsense, hardworking and practical guy, not prone to telling strange tales, but this would change starting in on the night of October 24, 2005. On this evening he was on a street not far from the Dismal Swamp when he saw off in the distance about 2 miles away “a massive ball of light” that was at an estimated altitude of 15,000 feet and being circled by jet fighters. As he watched, the ball of light and fighter jets moved off into the distance out of sight. He wasn’t quite able to wrap his head around what he had seen, and then three nights later he saw something strange again over a Suffolk shopping center. He says of this:

I was driving in front of the Fresh Pride grocery center and saw it up close. The light was hovering over the center. I pulled up to the parking lot and was not prepared for what I saw. There was an object inside the light. The light had been an illusion. At first, I thought it was just a stealth bomber, but I realized a stealth wasn’t that big.

He would describe the object as a massive triangular shape that moved very slowly out across the sky. These two sightings would prove to be just the beginning of a series of strange incidents he would witness over the coming years. He began to have numerous sightings of strange objects in the sky, often seen from the window of his apartment, while others seemed to occur mostly over lakes and landfills, which led him to believe they were using these places as hiding spots. Some of these objects he actually managed to film, which led to some bizarre and frightening experiences. One time he claims that he was visited by a mysterious man in military clothes who told him to remove one such video he had posted online, and another even more surreal experience happened after he captured another video on his cell phone from his apartment window and posted it online. He says after the video was posted he woke from a nap to hear someone at the door, and he explains of this:

It was an orb of light. Just a big ball of light. It wasn't moving. One was solid white. The other was directly across the street from it ... up 300 feet above ground and was changing colors very rapidly. I thought “This is ... this is not usual. Something's wrong here. Maybe I am in over my head. I'm not supposed to be looking at this stuff. I woke up from the nap by the sound of someone trying to enter my apartment. And I said, 'Who is it?' There was no answer. Still just, you know, you could see the door knob moving and like a scratching at the door. And I keep a firearm. It was on my table. And my thought was to get up and check. But I was in complete paralysis. The only things I could move were my eyes. And I heard a voice through the door say, 'You don't need that weapon. We won't harm.'

After this, he says his experiences began to get more intense. He found he would often have bouts of missing time, that he could not account for, as well as temporary paralysis and occasions in which he was visited be strange entities in his sleep but later be convinced it had not been a dream. He says of one such episode:

The first time was during the last Saturday in February of 2008. I went to sleep on my couch and woke up in a massive dining hall. There were lots of tables. Everything was white. People were eating. They all looked like human beings. They were tucked away in a position that made no sense. It’s not something I would do. The only conclusion for me was that they brought me in and out through the window.

These unsettling incidents came to be more and more common, to the point that he was sure that he was being abducted by alien beings who had for whatever reasons taken an interest in him and wanted to study him. Sometimes he would remember what happened clearly, at other times is was all blurry and indistinct like a half-remembered dream, whereas many times he remembered almost nothing at all. He tried keeping a sort of dream journal, jotting down whatever he could remember in the wake of these odd encounters. He would say of one such incident:

I was in a room and I saw a woman who did not have complete human features. She had the typical black eyes that you hear about. She had an elongated skull. And that startled me. And the next memory I have is me standing on my balcony waving at this cylinder-shaped ship. 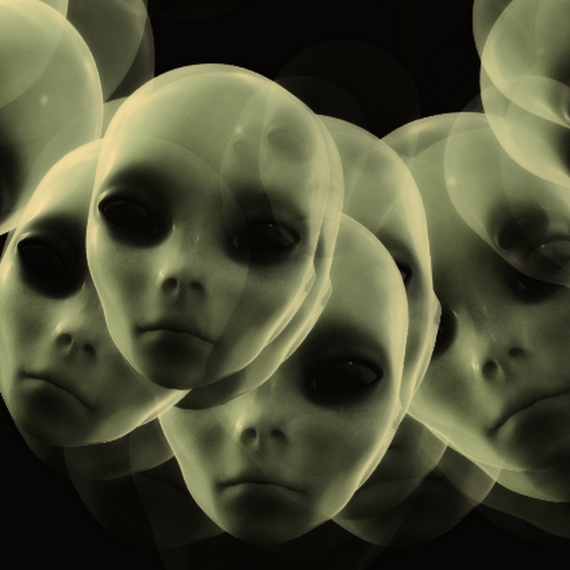 Copeland began to look into the alien abduction phenomenon and even travelled 600 miles to attend a seminar of people who had experienced similar things to him, which was attended by 1500 people who were either abductees, those curious about UFOs and aliens, or ufologists. It was partly his participation in this conference that captured the attention of The History Channel's UFO Hunters series, which did a whole segment on his experiences. Host Bill Birnes even speculated that Copeland was an alien hybrid and didn’t know it, and that’s why he was being so closely watched, to which Copeland responded, “That's heavy. It's not surprising to me, though. After all that's happened these last couple of years, it could be true.” The UFO Hunters team even brought Copeland to medical experts for testing, where he was found to have an “unknown, rare blood disorder,” whatever that means, which the show claimed was also shared by other supposed alien abductees. As to why these aliens might have taken an interest in him, Copeland can’t really say, although he firmly believes that these beings are monitoring us and are preparing to meet humanity face to face, whether we like it or not. He says of this:

I truly believe that's what all of this is leading to – a meeting with a biological entity. Every culture from the Aztecs to the Egyptians talks about someone coming from the sky. The information is there for us. Unfortunately, we don’t look at things with a logical mindset. … As humans with modern civilization, we’ve been blessed and think we’re at the top of the proverbial food chain. But that isn’t the case. They will reveal themselves and intervene in human affairs. We need to get off our high horses. People will not take the integration lightly. … They’re going to show themselves. Get ready. You want change? Change is coming.

It is a rather ominous note to end on, leaving one to wonder what sort of change this might be. Copeland seems to be on the surface a very sincere and reliable witness, but one has to wonder just how much of his bonkers tales are true. Is there anything to be learned from this all, and if so, what? If any of this is real, then what are these entities trying to tell us? Your guess is as good as anyone's, and while we try to figure it all out, similar reports keep coming in.