Dinosaurs May Have Carried Rocks 1,000 Miles – In their Stomachs

A bunch of prehistoric rocks discovered in Wyoming were believed to have been brought over from Wisconsin by dinosaurs – inside of their stomachs.

The rounded fist-sized rocks were discovered back in the summer of 2017 by Joshua Malone. They were definitely out of place compared to the fine-grained mudrocks that covered the area. He showed the rocks to his father David Malone who is a geologist at Illinois State University and almost four years later, they believe they have the answer as to how they got there.

The Malones and their colleagues claim that the rocks that were found at the Jurassic-aged Morrison Formation came from about a thousand miles away at a rock formation in the southern part of Wisconsin. As for how they ended up in Wyoming, the researchers said that they were carried all that way in the stomachs of sauropod dinosaurs. Interestingly, many dinosaur fossils which include sauropods have been unearthed at Morrison Formation. These rocks are known as gastroliths which are small stones that dinosaurs purposely swallowed in order to help them digest their food.

The researchers opened up the rocks to analyze the zircon crystals inside of them. Joshua explained this in further detail, “What we found was that the zircon ages inside these gastroliths have distinct age spectra that matched what the ages were in the rocks in southern Wisconsin.” “We used that to hypothesize that these rocks were ingested somewhere in southern Wisconsin and then transported to Wyoming in the belly of a dinosaur.” (A picture of these gastroliths can be seen here.)

The fact that the sauropods traveled all the way from Wisconsin to Wyoming contradicts previous theories on how far they migrated. One reason for their migration could have been because of the seasons changing so they would have needed to travel in order to get more food and water. This makes sense as sauropods could have grown up to 100 feet in length and weighed as much as 80 metric tons so they certainly would have needed lots of food.

Oddly enough, there weren’t any dinosaur remains near the gastroliths as you might expect if they were carried in their stomachs. This has some scientists doubting that the stones were gastroliths. 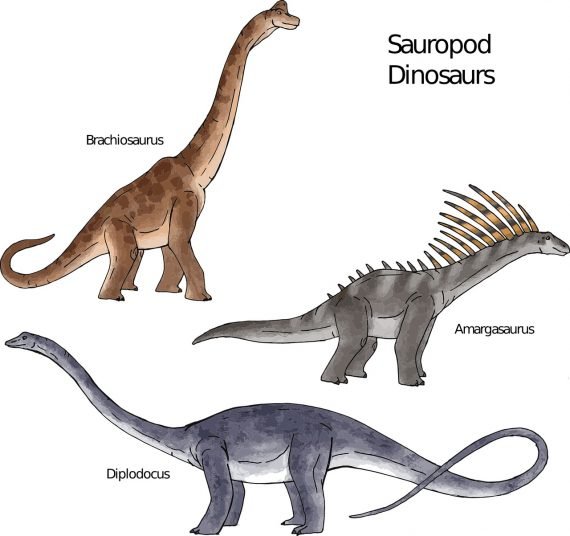 Oliver Wings, who is a geologist and vertebrate paleontologist at Martin Luther University Halle-Wittenberg in Germany, stated, “Unfortunately, we have no real evidence that these clasts are indeed former gastroliths,” adding, “We cannot exclude the possibility of transport of the stones in the bellies of dinosaurs, but it remains just one possibility of several.”

However, he did say that the new technique the researchers used to analyze the suspected gastroliths may help experts study other “stomach stones” that were found with dinosaur fossils. “It would be amazing if they could use that method on genuine gastroliths.”

Their study was published in the journal Terra Nova where it can be read in full.