Haunted Carbisdale Castle is Back Up For Sale

Carbisdale Castle near Ardgay, Scotland, has been put on the market for £1.5 million (a little over $2 million in American funds).

The large 42,000-square-foot castle was constructed between the years 1907 and 1917 for Mary Caroline who was the Duchess of Sutherland and the second wife of George Sutherland-Leveson-Gower, the 3rd Duke of Sutherland. After her husband passed away, she attempted to block her step-children from getting their inheritance but eventually they came to an agreement where she would have a castle built. Her Carbisdale Castle ended up being nicknamed the “Castle of Spite”.

Wealthy businessman Colonel Theodore Salvesen purchased the property in 1933 and the castle was later used as a refuge for Norwegian royalty during the Second World War. After his passing, his son gave the estate to the Scottish Youth Hostels Association (SYHA) who owned it until 2016 when the current owner bought it. And now it’s back up for sale.

While the castle itself is exquisite, it is rumored to be quite haunted. The most active ghost is nicknamed the “White Lady Betty” who often makes her presence known. An employee at the castle claimed to have seen this female apparition standing next to a whin bush on the property. He described her as “...a lady clad in white dress which seemed to fall as if draped from her shoulders.” 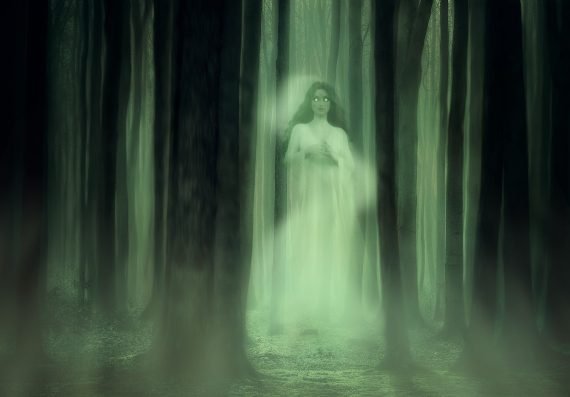 The spirits of a bagpiper and an organist have been heard playing music in the former ballroom. A sword-wielding warrior has also been witnessed on the property who many believe was General James Graham, the Marquis of Montrose, who died in battle in 1650. Described as “angry and distressed”, he has been seen wandering the link corridor of the castle while carrying his sword.

The castle even has a “spook room” because of all the paranormal activity that goes on there. It is one of the bedrooms on the top floor that was once used as a nursery. Ghosts have been seen walking around the beds that were positioned against the wall and the beds have even been found turned completely around without any explanation. Other unexplained activity in that room includes people hearing the sounds of children talking and crying, as well as rain dripping down on people.

If you have one and a half million dollars to spend on a beautiful property, Carbisdale Castle would definitely be a place to consider although you may find yourself coming face-to-face with numerous ghosts. Several more pictures of the castle can be seen here.

Medieval Sword from the Historic Battle of Grunwald Found in Poland