The Tasmanian tiger (thylacine) gets all of the love and attention when it comes to maybe-extinct-maybe-not discussions, but Sumatra has a strange maybe-mythical-maybe-not creature that will make you forget your Sumatran Mandheling Coffee for a moment (something hard to do) – the Sumatran serow, a goat-antelope that hasn’t been photographed in years and allegedly sleeps in trees hanging by its horns. Hey … the tree-climbing goats of Morocco are real – why not the tree-hanging goat-antelopes of Mumatra?

“It’s like it’s mythical. People just hear about it, but they never get footage of it.” 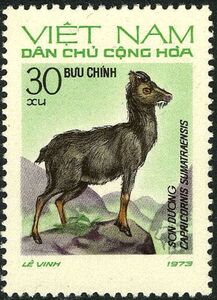 Pungky Nanda Pratama, a founder of the Sumatran Camera Trap Project, told Mongabay (a nonprofit environmental science and conservation news platform) about his so-far unsuccessful quest to photograph a Sumatran serow (Capricornis sumatraensis sumatraensis), a subspecies of the mainland serow that is believed to live only in the mountains on the island of Sumatra and on the Malay Peninsula in Southeast Asia -- “believed” because there are very few photos or videos of it. They were once hunted for food and traditional medicine (an aphrodisiac, of course), but are now classified as ‘vulnerable’ and protected. As is often the case, that hasn’t stopped poachers. Some restaurants claim to sell Sumatran serow meat, but there’s no proof it’s real.

Yeah, yeah, yeah … what about the hanging by their horns from trees part?

Based on past descriptions, the Sumatran serow has a black pelt and curved-back horns (photo here) that can be almost as large as its head. The herbivores eat fruits and grasses and tended to stay in the same mountainous areas where coffee is grown. You guess it – the spread of Sumatran coffee plantations has contributed to the demise of the Sumatran serow. Pungky Nanda Pratama has had 17 motion-detection cameras set up since 2018 in a wildlife reserve on the Isau-Isau forested volcano – prime Sumatran serow territory – but has never captured even one on film. He hasn’t given up because a video (see it here) recorded last year in Mount Leuser National Park in northern Sumatra showed a male and female serow, while three were photographed in Mount Ledang Johor National Park on the peninsula. That beats the number of thylacine photos, but they're still extremely rare.

Did you forget about the horn-hanging?

No, and neither has Pungky Nanda Pratama. It’s one of the mythical traits of the Sumatran serow he’d like to verify with his own eyes.

“Some villagers tell him the animal, a type of goat-antelope, sleeps in the trees hanging by its horns, or scales mountains by hooking its horns on rocks. But even after five years spent searching for the serow near a volcano on the Indonesian island of Sumatra, Pungky has only ever seen its skull.”

Even with the tree-hanging myth, the demand for its medicine and the guilt over humans driving them to the brink of extinction, the Sumatran serow isn’t as loved as the Tasmanian tiger nor some of the other rare animals of the island, like the Sumatran tigers and Sun Bears. Let’s hope they’re found and saved before the photographs become objects of skepticism and ridicule like those of the Tasmanian tigers.

The Eerie Vanishing and Reappearance of Katherine Van Arst