The two names most associated with Planet Nine are astronomers Michael Brown and Konstantin Batygin of Caltech. In 2016, they published a paper about their simulation of Extreme Trans-Neptunian Objects (ETNOs) to determine why these faraway space rocks share the same angle at perihelion, the point in their orbit that is closest to the Sun, and concluded this could be caused by a large planet not more than 10,000 astronomical units from the Sun – anything beyond that would be out of the gravitational pull of the Sun – that was somewhere in the Oort Cloud. The pair recently released a new paper based on new data and simulations which will help Planet Nine hunters, including Brown and Batygin, narrow their search. Before you buy a bigger telescope and a new star map, you may want to hear them out.

“Due to the long-term gravitational pull of Planet Nine's orbit, inner Oort Cloud objects evolve on billion-year timescales, slowly getting re-injected into the outer solar system. So what happens to them? We have simulated this process, accounting for perturbations from the canonical giant planets, Planet Nine, passing stars, as well as the galactic tide, and have found that these re-injected inner Oort Cloud objects can readily mix in with the census of distant Kuiper belt objects, and even exhibit orbital clustering."

On their Find Planet Nine blog, Brown and Batygin revise their thinking about the Oort Cloud based on new simulations which use the 19 now-known ETNOs rather than the original six used in 2016. Where they once assumed objects in the Oort Cloud were static, they now consider the possibility that some could have come from the Kuiper Belt, which is close enough to the Sun to contain Pluto and the other minor planets. Further, they propose that there is still movement going on in both directions between the Kuiper Belt and the Oort Cloud, specifically in the inner Oort Cloud. Finally, that inner Oort Cloud was affected during its creation by both Saturn and Neptune flinging debris outward while nearby developing stars in the early formation of the galaxy pushed them back towards the Sun. The result is a dense – relative to the rest of the Oort Cloud – ring of space objects.

“However, the degree of clustering they show is prominently weaker, suggesting that a more eccentric P9 is required to explain the data. Another intriguing aspect of these calculations is that they produce a more radially extended distribution of long-period TNOs, providing an intriguing potential explanation for the abundance of highly long-period orbits, such as that of the Goblin.” 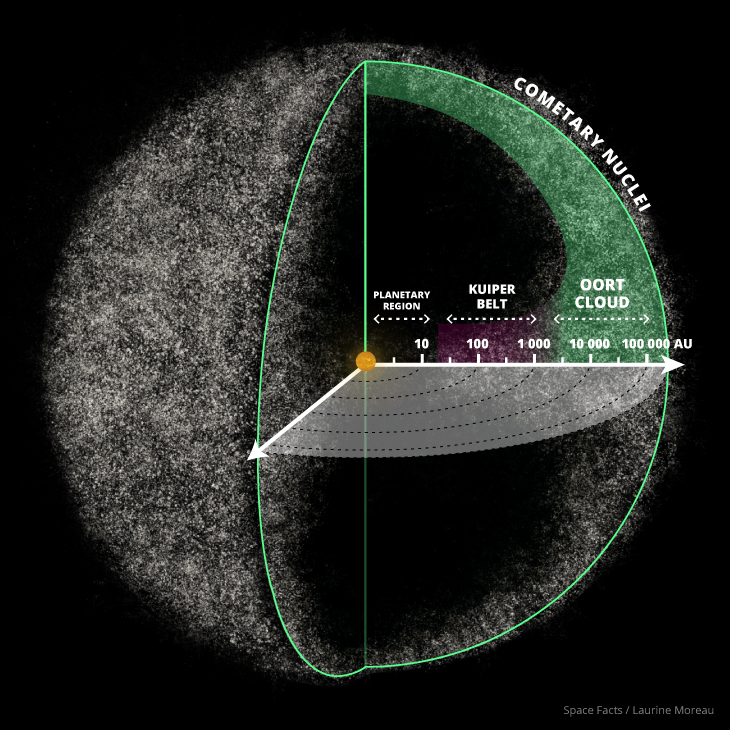 The Goblin – formally named 541132 Leleākūhonua – was the third ETNO discovered and is known for its extreme orbit around the Sun at a distance of 65–2000 AU once every 32,000 years with a very high eccentricity of 0.94 and angle of inclination relative to the standard planetry plane. All of that made both simulations digitally scream “Planet Nine!” with the more recent one adding “In the inner Oort Cloud!” Put it all together and it tells Planet Nine hunters to look for it in the inner Oort cloud at an orbital eccentricity and angle similar to the Goblin's. That narrows the area down, but it’s still far beyond Pluto and the Kuiper Belt. Needless to say, Brown and Batygin are excited.

“All in all, as scientists, our primary role is to continue hammering away at the hypothesis, and our new simulations indicate that there exists an intriguing additional mode of P9-induced dynamics affecting our efforts to pin down the orbit of Planet Nine. With each theoretical breakthrough, the observational search comes into sharper focus.”

In other words, keep looking!

The Strange Tale of the Mystic Who Battled Demonic Hobgoblin Imps