The Bizarre Adventures of the Mystical Madame Blavatsky

The world of mystics and psychics throughout history is full of some pretty strange characters. Some of these mysterious people have managed to spin some pretty wild tales and mythologies around them, often making them larger than life and propelling them into legend, with truth and reality hard to separate. One such person was a psychic who went on a journey that brought her both amazing powers and intriguing legends we may never be able to get to the bottom of.

The woman who would come to be known as Madame Blavatsky was born in Ukraine in 1831 under the name Helena Petrovna von Hahn. She was weird from a very young age, constantly claiming to be followed around by invisible friends she called “hunchbacks” and often claiming that she had psychic powers and the ability to lull animals to sleep. Her childhood was mostly spent moving from one place to another, as her aristocratic family were required to move around to a lot to different regions on business. When Blavatsky's mother died of tuberculosis in June 1842, she was sent with her siblings to live with her grandparents in Saratov, and although she was from a higher class it was noted that Helena preferred to hand out with lower class kids. While in Saratov she allegedly stumbled across the esoteric library of her great-grandfather, Prince Pavel Vasilevich Dolgorukov, who had been initiated into Freemasonry in the late 1770s and had belonged to the Rite of Strict Observance, and from there she apparently found her calling in the world of mysticism and magic.

It was around this time when she would begin to feel the pull of wanderlust, when she began having visions of a man from India, who she believed to be a powerful astral being called an “Ascended Master.” She would claim that she was also guided through astral travel by the Masters, visiting faraway places that would haunt her dreams and pull her out towards the horizon. Despite these forces calling out to her, she was briefly married to a Russian military officer and provincial vice-governor at the age of 17, but they separated after a few months. Not long after this she claims to have met a, Ascended Master in the form of an Indian Prince named Morya while visiting London, who she recognized as the one from her dreams and who set her on the path to studying Eastern mysticism and told her that she had a great mission to help humanity. That was when she decided to embark on a spiritual journey around the world to pursue the entities who she believed to be reaching out to her.

Morya allegedly gave her instructions to go to Tibet, and along the way she spent some time in India, before ending up in Constantinople and meeting up with him in person. The two of them then travelled into Tibet, eventually reaching the mythical city of Shamballah in the Himalayas, where she was introduced to other Masters and even the immortal Count of Saint-Germain, and she began her esoteric training in earnest. She claimed that in those remote mountains she learned many powers such as clairvoyance, clairaudience, telepathy, the ability to control other people, materialize or dematerialize objects, astral projection, and others. She also said that she was taught an ancient unknown language called “Senzar,” and that she was shown a magic manuscript called the Sacred Secret Sciences, which contained secrets of the universe. She would stay in Tibet from late 1868 until late 1870 before moving on to India and Cairo, where she formed the Societe Spirite, before heading back to Europe. 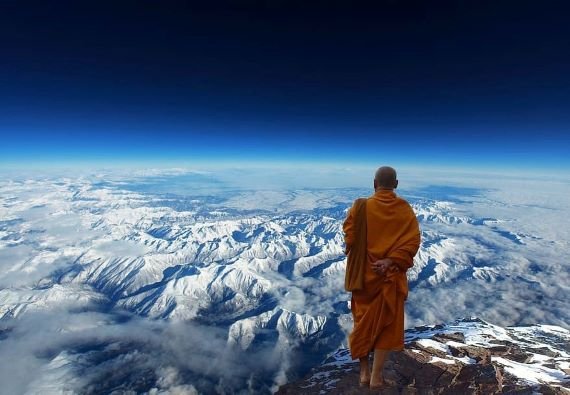 Along the way to Europe she had further adventures, such as allegedly being shipwrecked at the Cape of Good Hope. Upon arriving in England, she had many occupations such as a concert musician for the Royal Philharmonic Society, before heading off to America and then sailing back to India via Japan, spending time in Kashmir, Ladakh, and Burma, as well as trying to reenter Tibet, which it must be understood was off-limits to foreigners at the time. She eventually returned to Europe and was said to have vast psychic abilities by this time, including even controlling the wind and weather, which were only magnified in the wake of a frightening spinal injury she had incurred while riding a horse. After this she supposedly travelled through Italy, Transylvania, Serbia, the Balkans, and Hungary, before heading to New York City in 1873.

In America, she would establish herself as a powerful spirit medium, and meet Colonel Henry Steel Olcott, who was a lawyer investigating the occult. The two would become business partners and co-found the Theosophical Society, built around the tenets of a mystical belief system called Theosophy. They set up shop in Madras, India, and the society grew rapidly, publishing a monthly magazine called The Theosophist and drawing in tons of followers from all over the world. All through this Helena, now called Madame Blavatsky, claimed to be in telepathic contact with the Ascended Masters, who appeared to her in a “higher astral non-corporeal state” and gave her guidance. She would also publish her book Isis Unveiled in 1877, later going on to write The Secret Doctrine and The Key to Theosophy, in which she outlines the tenets of Theosophy and calls it “the synthesis of science, religion and philosophy,” proclaiming that it to be the key to the "Ancient Wisdom" that underlies all the world's religions.

Blavatsky was now making quite the name for herself in spiritualist circles, and with her Theosophical Society so high profile she attracted the attention of the Society for Psychical Research, based in London, which wanted to investigate whether any of her supposed powers were real. They would come to the conclusion that she was nothing but a fraud and a charlatan, using her society and various illusions and sleight of hand to rip people off, and deeming her “Ascended Masters” and supposed world travels to be pure fiction. One searing report from the Society for Psychical Research would mince no words when it said of Blavatsky:

For our part we regard her neither as a mouthpiece of hidden seers, nor a vulgar adventuress.  We think she is one of the most accomplished, ingenious, and interesting imposters in history. The ingredients of a successful charlatan are having no conscience, some brains, much courage, corrosive selfishness, vainglorious ambition, and monumental audacity. Blavatsky has all these.

It would never really be solved, as Blavatsky’s health would deteriorate due to the effects of a weak heart, rheumatism and Bright’s disease, compounded by a bout of influenza, causing her to pass away at the age of 60. She has gone down as one of the more controversial figures in the history of spiritualism and psychic phenomena, attracting just as many detractors as believers, but she has had an undeniable influence on Western esotericism and the New Age movement regardless of whether she was the real deal or a fraud. There are many who accuse her stories as being pure fabrication to drum up interest and build up her own legend, but no one really knows for sure and there is very little to corroborate or dismiss any of it. Fraud, charlatan, or real, it seems that Madame Blavatsky has taken her place in history as an enigmatic individual who we will probably never fully understand.

The Paisley Witch Trials and the Town’s Curse