The Bizarre Mystery of the Spitzbergen UFO Crash

Out in the cold, gray expanse of the Arctic Ocean, north of mainland Europe, is the remote Norwegian archipelago of Spitzbergen, now mostly known as Svalbard. It is a frigid, somewhat hostile domain once used as a base of operations for whalers and miners, with most of the land covered by glaciers and intersected by numerous fjords, and enveloped in a near eternal night during the frigid winter months. It is a sparsely inhabited, largely untouched and unspoiled realm of majestic natural beauty, and it is also the location of a series of very bizarre supposed UFO crashes.

The first of two supposed UFO crashes in the area of Spitzbergen supposedly begins in 1946, when a General James H. Doolittle was allegedly sent to the region by the Shell Oil Company for the purpose of investigating aerial phenomena in the area that were being called “ghost rockets.” Journalist Dorothy Kilgallen would then claim that a crashed UFO had been recovered in the area by the British and U.S. governments, claiming that sailors serving aboard the U.S.S. Alabama had told her that the mysterious craft had been recovered by Doolittle in Spitzbergen and whisked away to the U.S. for study. The story would basically end here, with her taking the truth to her grave when she died in 1965, but it would not be the last time something like this would be reported from the region.

In June of 1952, a squadron of six Norwegian jet planes had just started summer maneuvers over Spitsbergen. As they sped over the Hinlopen Straits their radios began crackling and emitting static before anomalously cutting out entirely to leave them with no way to communicate with each other. In the meantime, radar showed that an unidentified object was fast approaching, but the pilots themselves could see nothing visually. The fighters circled the area for some time, when Air Captain Olaf Larsen purportedly looked down to see a metallic disc lodged into the snow frosted landscape down below, measuring 40 to 50 meters in diameter and shiny and bright enough to stand out in the snowy landscape. Further inspection would reveal that machinery and cables could be seen, as well as a series of jets around the side and what appeared to be a broken cockpit protruding from the icy ground. When they were finally able to get back to base and report what they had found, an expedition was sent to the apparent crash site, and a report in the German newspaper, Saarbrücker Zeitung would say of what was found:

A precise inspection of the remote-controlled flying disc that landed on the Nordaustlandet of Spitsbergen due to interference problems, led to the following indisputable information. The flying object, which has a diameter of 48.88 meters and slanting sides, is round and was unmanned. The circular steel object, is made out of an unknown metal compound, resembles a silver disc. After ignition, 46 automatic jets, located at equal distances on the outer ring, rotate the disc around a plexiglassed center ball, that contains measuring and control devices for remote control. The measuring instruments (gauges) have Russian symbols. The action radius of the disc seems to be more than 30.000 km, and the altitude over 160 km. The flying object, which resembles one of the legendary "flying saucers", has sufficient room for high explosive bombs, possibly nuclear bombs.

In the wreck of the apparatus an expert is said to have discovered a radio piloting transmitter with a nucleus of plutonium transmitting on all wavelengths with 934 hertz, a measure that has been unknown so far. The investigation has also shown that the flying saucer crashed because of a defect in its radio piloting system. The saucer carried no crew. The steel used in the construction is an unknown alloy. It consists of an exterior disc provided at its peripheral with 46 automatic jets. This disc pivots around the central sphere which contains the measurement and remote-control equipment. The Norwegian specialists assumed that the disc had started from the Soviet Union and had gone down over Spitsbergen due to a mistake in transmitting or receiving, being incapacitated because of the hard landing. The strange, remote-controlled, unmanned jet plane will be brought to Narvik on board a ship for further investigation.

OK, so although weird, this was obviously just some sort of Russian experimental aircraft of some sort, right? Well, that is what it would seem to be at first, yet the story would continue to pick up new information and evolve. As the story got out into the open it would pick up new details, such as that of a report that supposedly came forth from a Colonel Gernod Darnhyl, of the Norwegian General Staff, who supposedly made the statement:

The Spitsbergen crash was very rewarding. True enough, our science still faces many riddles. I am sure, however, that they can soon be solved by these remains from Spitsbergen. A misunderstanding developed, some time ago, when it was stated that the flying disc was probably of Soviet origin. It has - this we must state emphatically - not been built by any country on earth. The materials are completely unknown to all experts, either not to be found on Earth, or processed by physical or chemical processes unknown to us. We must tell the public what we know about the unknown flying objects. A misplaced secrecy may well one day lead to panic! We now have material at hand, on which we can start. That means laboratories can start the work right away and they might give us preliminary results shortly. Norwegian scientists think that the material from Spitsbergen can only give away its secrets by nuclear crushing; this because it does not change either at absolute zero, when air is liquified, or at the highest temperatures technically possible with our technology. Also, every chemical treatment has been tried. Scientific results will only be released subsequent to a UFO conference in London or Washington. 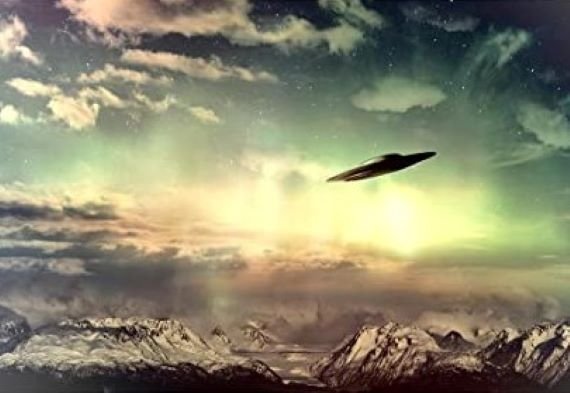 So now it is not a Russian aircraft? Curiouser and curiouser. Before long, there were ever more fantastical stories surrounding the purported UFO crash, such as a report in Uruguayan newspaper El Nacional, of Montevideo. In the report, it is claimed that the Norwegian scientist Hans Larsen Løberg had made clear that the craft had actually come down at the German island of Helgoland, in the North Sea, and was definitely not Russian, having no discernible engine, nor any rivets, fuses or bolts, and speculated to have operated on “magnetic forces.” Løberg also apparently stated that the craft had some sort of “beam weapon” on board, as well as the remains of actual alien bodies, or at least a crew of some sort. The report reads in part:

The material used was as light as aluminum, but very much harder, and probably much heat-resistant. Of the things found in its interior, they noticed some water that was three times as heavy as normal water, and a few pills which were taken to be food. There was also an apparatus which probably was a radio. It was quite small and had no antenna. They also found some books, probably navigational instructions, in a completely unknown writing. The doors of the spaceship were open. Just inside of the doors were 7 bodies, burned beyond recognition. Scientists are of the opinion, according to Larsen Løberg, that the bodies were of men at the age of between 25 and 30 years, about 1,65 m tall. All had perfect sets of teeth. The reason for the crash of this saucer, he thought, had to be that it was affected by the American hydrogen-bomb explosions. The material of the spaceship, and its apparatus, resisted the enormous heat, but the crew burned to death.

And just like that, the story has gone from a mysterious crash that could be anything or nothing at all to a downed alien spaceship with dead crew, alien or otherwise, on board. After this the whole story becomes hazy and there is not much to corroborate any of it, with many different versions offered up over the years that only further serve to muddy the waters as to what is going on. Indeed, there seems to be little to link any of this to an actual factual basis, and it lurks within the realm of strange cases that will probably be discussed over and over again, but which have no concrete evidence that can ever lead us in the direction of a real answer. The verdict of many in the UFO field is that this is an obvious hoax that has gotten out of control to take on a life of its own, with Norwegian ufologist Ole Jonny Brænne coming to the conclusion:

The conclusion therefore has to be that the Spitsbergen story (and the Helgoland story too, for that matter) is nothing but a classic H-O-A-X! The original authors, mainly J.M.M. and Sven Thygesen (if that was their real names), had a cursory knowledge of Norwegian military aircraft, but far from good enough. Even if this case does not hold any water, I will venture my way with a little prophecy: This story will, with great certainty, continue to be the subject of books as well as magazines during the 1990s. There will always be "researchers" who think this story deserves their enthusiastic attention, and cannot settle down with factual arguments which clearly show the story to lack any basis in reality.

Was this a hoax, or was there something more to it? Opinions seem to be divided on this case, which only further fuels speculation and debate. Did something crash out there in that snowy wilderness and was it covered up? Why has it evolved to add new details over time? It this the truth slowly coming out or the result of mere embellishment? Just what happened out there in the wilds of that remote place? The mystery remains, and we may never know for sure.

The Mysterious and Sinister Callers at the Doors: Paranormal Invaders