The Mothman Prophecies Movie and the Chernobyl Disaster of April 1986: What’s the Truth?

Now and again, I get asked if Mothman was really seen - on multiple occasions - at the site of the Chernobyl disaster in April 1986. And, as a follow-up to my recent article on Mothman, Gray Barker and John Keel, it's happened again: two people have asked me about the Mothman-Chernobyl story. The fact is that, no, Mothman was not specifically seen at Chernobyl. However, there are good reasons why people might think the winged menace was there. Before we get to the matter of the subject, however, here's a bit of background information of what went down at Chernobyl. The United States Nuclear Regulatory Commission said of the terrible incident: "On April 26, 1986, a sudden surge of power during a reactor systems test destroyed Unit 4 of the nuclear power station at Chernobyl, Ukraine, in the former Soviet Union. The accident and the fire that followed released massive amounts of radioactive material into the environment. Emergency crews responding to the accident used helicopters to pour sand and boron on the reactor debris. The sand was to stop the fire and additional releases of radioactive material; the boron was to prevent additional nuclear reactions. A few weeks after the accident, the crews completely covered the damaged unit in a temporary concrete structure, called the 'sarcophagus,' to limit further release of radioactive material."

The Commission said: "The Soviet government also cut down and buried about a square mile of pine forest near the plant to reduce radioactive contamination at and near the site. Chernobyl's three other reactors were subsequently restarted but all eventually shut down for good, with the last reactor closing in 1999. The Soviet nuclear power authorities presented their initial accident report to an International Atomic Energy Agency meeting in Vienna, Austria, in August 1986. After the accident, officials closed off the Chernobyl area within 30 kilometers (18 miles) of the plant, except for persons with official business at the plant and those people evaluating and dealing with the consequences of the accident and operating the undamaged reactors. The Soviet (and later on, Russian) government evacuated about 115,000 people from the most heavily contaminated areas in 1986, and another 220,000 people in subsequent years."

With that all said, it's now time to take a look at the controversial Chernobyl connection. Or, non-connection. The Portalist says: "In the decades following the disaster, rumors have flown on cryptozoology-inclined corners of the internet that Chernobyl workers and residents of Pripyat saw something very eerie in the days prior to the explosion." The Portalist continues: "Reportedly, a bizarre winged creature was seen flying over the town on numerous occasions. A few workers at Chernobyl also allegedly saw the same creature hovering over the plant. Even stranger, those who claimed to have seen the creature were reportedly plagued by nightmares and harassed by incessant, threatening phone calls thereafter. Many claimed the creature resembled a man-like bird with red eyes, and some came to refer to it as 'the Black Bird of Chernobyl.'"

Now, onto Loren Coleman, who says of all this: "John Keel and I openly discussed with the media, and did our best to straighten out the record regarding the mythos that became the Chernobyl 'Mothman' accounts. The Chernobyl story, the Galveston Hurricane-Mothman tie-in, and other examples given in the 2002 movie were pure fiction." Loren continued that "right after the movie was released, various websites posted the Chernobyl/Mothman sightings as factual. But there is not one thread of evidence that any winged weirdies were witnessed before the Chernobyl accident. It is a bit of movie fiction that has, unfortunately, moved into pseudo-factoid cryptozoology." That's not quite the end of the situation, however. We now have to go back thirty years. 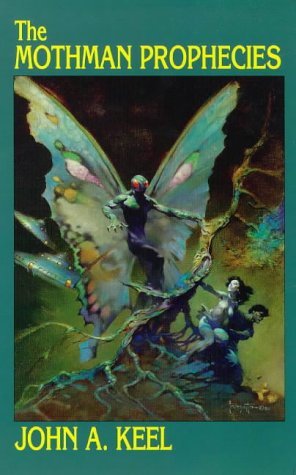 In 1991, IllumiNet Press published a then-new edition of John Keel's 1975 book, The Mothman Prophecies. At the end of the book there is a 7-page-long new Afterword from Keel dated July 10, 1991. Towards the end of the Afterword Keel says something interesting: "History does repeat itself and in the 1980s the Soviet Union was suddenly engulfed with UFOs and monsters in a classic repetition of what happened in the USA in the 1950s and 60s. As in the Great American Wave of those decades, it all seemed to have very important meanings and the innumerable events were subject to all kinds of interpretations ranging from the occult and religious to the scientific and the cosmic. Bright lights were haunting Soviet atomic plants and hundreds of remote little Russian towns were plunged into the same kind of Twilight Zone horror that once gripped Point Pleasant."

By referencing, in 1991, (A) the Soviet Union being "engulfed with UFOs and monsters;" (B) "Soviet atomic plants;" and (C) "little Russian towns" being "plunged into the same kind" of horror that descended on Point Pleasant, it may well be that it was Keel himself who inadvertently helped to provoke the Chernobyl legends [italics all mine]. Certainly, it's easy to see how and why Keel's references to Soviet atomic facilities and to monsters in Russia - and all in the same breath, no less - could have provoked rumors of a Chernobyl connection in later years.