Stories of mysterious ghost ships have been a staple of high seas mystery since time unremembered. One very persistent and well-known local tale of a ghost ship comes from the Northumberland Strait in the Gulf of Saint Lawrence of eastern Canada. The strait is defined by the Prince Edward Island and the shores of the gulf, and separates Prince Edward Island from Nova Scotia and New Brunswick. The Northumberland Strait is popular with tourists in the summer months, due to its sandy beaches and uncommonly warm water temperatures at that time, and becomes a frozen wasteland in the winter months. The area has a long history with plenty of legends and folklore, but one of the most popular and pervasive here is that of its infamous flaming ghost ship.

What has come to be known as The Ghost Ship of North Cumberland Strait has been allegedly sighted in the strait for centuries, usually appearing as a three or four-masted schooner with sails of pure white, which materialized out of thin air. There are very often ghostly crew members and dogs seen on the decks, but the most startling aspect of the ghost ship is its tendency to suddenly and spectacularly burst into flame. Sometimes this blaze will cover the entire vessel, while at other times it engulfs only the sails, and the spectral crew is said to show no reaction at all to this fiery state. The ship is usually described as being incredibly clear and realistic looking, to the point that it can be mistaken for an actual ship on fire, its ghostly identity only betrayed when it disappears into thin air. Local historian Cathy Gillies has said of this:

People will see the outline of a schooner or three-masted ship. It’s on fire, and it’s vivid. It’s so vivid that people have described seeing men running along the decks. There are records of people going out in their boats to try to rescue the sailors. 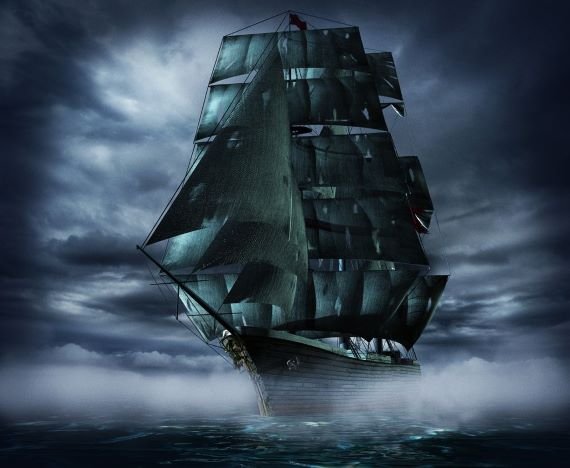 One rather well-known historical report of this happening comes from the year 1900, and was written of in the book Folklore Prince Edward Island, by Sterling Ramsay, reading:

Late one evening, approaching dusk, a ship [was] sighted in the harbour which appeared to be in peril…. Some distance out in the channel was what appeared to be a large three masted sailing vessel ablaze from bow to stem. A group of men boarded a small boat and rowed toward the flaming ship, in hopes of rescuing as many of her crew as possible. While they were still some distance from the craft, it disappeared into the mist and appeared to vanish completely.

In some of these tales of people approaching the burning ship the would-be rescuers are never heard from again, or come back stark raving insane. Indeed, the mysterious ship has gathered many legends about it, such as that it is a portent of a coming storms and catastrophe, or that it will appear even when the strait is frozen solid, hovering above the ice below. The legends on where the ghost ship actually came from are also numerous. One story is that it is the spectral form of a ship called the Colbum, lost during a storm in 1838, or perhaps that of another vessel named the Isabella, which departed in 1868 for South America and disappeared without a trace. It has also been variously said to be a ship called the John Craig, which was wrecked off Shippigan Island, a pirate vessel sunk near Merigomish by a British warship during the Napoleonic War, a pleasure craft said to have been set ablaze after a drunken brawl, or a merchant ship bound for Quebec that was supposedly struck by lightning to burn until it sank. 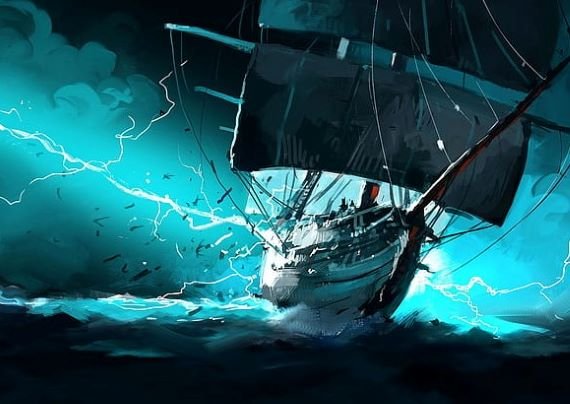 There are other mundane possibilities that have been offered up as well. One is that it is nothing more than a type of mirage called a Fata Morgana, caused by a thermal inversion which refracts light to distort objects at a distance to make them appear closer, often inverted, shimmering, with different shapes, and often appearing as if hovering. Another non-paranormal idea is that it is caused by a weather phenomenon called St. Elmo’s Fire, in which electrical distortions in the atmosphere case a glowing halo upon the edges of some objects. Other theories are that it is the reflection of the moon off of fog, electrical atmospheric disturbances, ignited gas from submarine coal beds, or even bioluminescent marine organisms. However, these explanations don’t really explain how so many people, often hundreds at a time, can see the same thing and be so convinced that it is a very real-looking ship on fire that can appear or disappear in the blink of an eye, making it difficult to find a scientific origin. The historian Gillies has said:

Some people think there might be a scientific explanation of what’s happening out there. But there have been many times when the ship was sighted by many people on the same night. It’s been recorded so many times that there is something there, but nobody has a real explanation for it.

It is still unknown just what this phenomenon means or what its origins are. What is this ghostly flaming ship that keeps being seen at this place? Is it indicative of some sort of paranormal phenomenon or can it be explained in rational terms? Whatever the case may be, these stories have been circulating for hundreds of years and show no signs of disappearing. For now, the flaming ghost ship still lurks out there in this place, stirring the imagination and debate.