One of the most archeologically important treasure troves on ancient Egypt is the place known as the Valley of the Kings. Once a necropolis for burying the dead, it has become a world renowned site for its numerous mummy discoveries, scroll fragments, and countless other artifacts that allow a peek into this mysterious ancient world. Yet for all of the attention this historic area has attracted from archeologists, there are new things being found all of the time, from new tombs and passageways, to other mysteries, and one of these are relatively recent findings that show that the ancient Egyptians liked to get inked up.

Many of the thousands of artisans and laborers who helped to build the Valley of the Kings made their home at a place called Deir el Medina, a sprawling World Heritage site full of numerous laborers’ tombs and scroll fragments. It was here where in 2014 archeologist Anne Austin, of the University of Missouri–St. Louis and her colleagues were working with 3,000-year old mummies for the Institut Français d’Archéologie Orientale’s mission at Deir el Medina and made a rather strange discovery. While examining the mummies using infrared light they saw that there were seven bodies that had had extensive tattoo work done, something which had never really been noticed before with Egyptian mummies due to the effects of the many centuries on the skin, the mummified skin becoming discolored and darkened, but which were quite clear under the infrared light. Austin would say of this:

It’s quite magical to be working in an ancient tomb and suddenly see tattoos on a mummified person. The mummification process colors the skin and obscures the tattoos from being visible. Infrared is a longer wavelength than visible light, so it can penetrate deeper into the skin than visible light and return information about what is under that surface.

Although there have been many depictions of tattooed figurines and artwork in ancient Egypt, as well as a handful of tattooed mummies that had been found previous to this discovery, these were mostly thought of as flukes, it was not known the extent of the tattooing because these had been detected with only the naked eye, and some were at first thought to have been designs that were painted on. Austin’s team had more than doubled the number of known Egyptian mummies with tattoos, showing that it was more widespread than originally thought, and the infrared analysis uncovered that the tattoos themselves were far more extensive and elaborate than was once believed. For instance, one of the mummies had more than 30 tattoos all up and down the neck, arms, shoulders and back, including those of Egyptian symbols and hieroglyphs, scarab beetles and lotus flowers, the Eye of Horus, which was an Egyptian sign of protection, and cross-shaped patterns and other designs. On another mummy, there were bold depictions of seated baboons on each side of the neck, other animals such as cobras and cows, as well as the Eye of Horus again. All of the mummies had had extensive tattooing done with various motifs, all most likely with the same technique that is used today, with ink and a needle.

Despite the incredible detail in these tattoos and the fact that they are some of the earliest examples of this in humans, the purpose they served is unknown. Theories include that they were for related to fertility, symbols of status, ritualistic symbols, signs of cult or magical knowledge or protection, or that they marked the individuals as being associated with temples as priestesses. Interestingly, almost every tattooed Egyptian mummy that has been found so far is female, which has suggested that the tattoos were for healers or powerful priestesses. The tattoos are also remarkable in that they are placed on areas of the body that would not have been covered, meaning they were meant to be prominently seen and shown off. Austin herself thinks they had religious or spiritual significance, saying of the mummy with the 30 tattoos:

The placement and symbolism of these tattoos tell us this woman may have served an intimate religious role at Deir el Medina. Several of these tattoos link this woman with the goddess Hathor. For example, dual cows wear Hathor necklaces on their arms. Other tattoos, like a bent-lotus plant, appear as graffiti on the stones of the Ramesside temple to Hathor at Deir el Medina. This hieroglyph served as a link between Hathor and papyrus marshes. Additionally, open lotus blossoms abound on the graffiti of the temple floor and were tattooed on either hip. Though many of her tattoos are still hard to decipher, these show a clear connection to religion and the goddess Hathor.

By tattooing in public regions of the body, the tattoos were intended to permanently mark the woman as associated with religious worship. The Eye of Horus was placed on the throat, the two shoulders and the back; from any angle when one looked at this woman, a pair of divine eyes peered back. These divine eyes were written together with the hieroglyph nefer. This combination forms the phrase “to do good.” This phrase was made even more effective by using a divine eye in place of a normal one. The placement of divine formulas “to do good” on her throat and shoulders may have magically imbued her song, speech and every arm movement with this ability.

The striking findings run counter to some earlier research in Egyptology, which gave little credit to women in religious practice. Women were often treated only as objects of desire or passive participants in a male-dominated religious hierarchy. While we cannot give her a priestly title, the permanent, public and religious nature of her tattoos indicates that women’s religious roles in ancient Egypt were more complex than titles suggest. With divine eyes placed all over her body, this woman may have even embodied the goddess herself.

Of course, it could also be that they got tattoos for just as many myriad reasons as people get them today, and maybe for no particular reason at all. For all we know they did it just because it looked cool. Although the tattooed specimens are almost exclusively women, there has since then been at least one male with a tattoo uncovered, using the same technique Austin used. A male mummy simply called “Gebelein Man A,” which had been on display at the British Museum for over a century, had marks on his arms that were long thought to have been painted on smudges, and were overlooked. When Daniel Antoine, the British Museum's curator of physical anthropology, used Austin’s technique on it in 2018, it was found that they were actually the tattoos of a wild bull and a Barbary sheep, thought to have perhaps signified status, power, and virility. A female mummy also on display was also found to have tattoos of S-shaped symbols that had never been noticed before. Both sets of tattoos are also significant because these mummies were even older than the ones found at Deir el Medina, being 5,000 years old, a period before Egyptian hieroglyphs even came into use, pushing back the date of the first known Egyptian tattoos by over a thousand years. 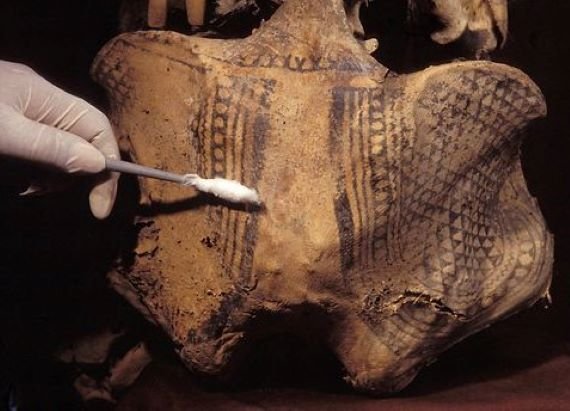 Although there have been earlier examples of tattoos on humans found, notably those of what is called Ötzi the Iceman, who lived in Europe sometime between 3370 and 3100 BC, the tattoos found in Egypt are the first known to have existed in Africa, and are also the first examples of such figurative complex designs and figures, unlike Ötzi’s broad and crude geometric patterns. With the Egypt findings, it is now thought that tattoos were perhaps far more commonplace in ancient Egypt than previously thought, and that many of the known mummies may have them hiding in plain sight. The idea now is to use these infrared imaging techniques to reexamine Egyptian mummies in order to uncover more about this poorly understood practice and gain insight into these enigmatic people. Austin is hopeful that it will shed much light on this dark area of history, saying:

Why did these ancient Egyptians get tattoos and what are their significance? What can they tell us about this ancient civilization? Are there more mummies like this out there? If there are, then can we learn something from them after all of these centuries? It is all unknown for now, but one of the things that we can understand here is that ancient Egyptians like to get tatted up, it looked rad, and other than that, time will tell.

2I/Borisov Update: The Comet is the Most “Pristine” Space Object Ever Studied