The Mysterious Tree-Worshipping Chimpanzees of Guinea

Chimpanzees are our closest living relatives on this earth, and they have more than proven time and time again that they are very similar to us in many respects. They show empathy, form friendships, use tools and even make dolls, and they also have our worst features such as warfare. They are majestic, extremely intelligent creatures that continue to surprise us all of the time with their spooky parallels to humanity. One recent discovery is that these animals might just have their own form of religion, worshipping at "temples" and "shrines," giving us a peek into how our distant ancestors first formed religions.

In 2010 a team of scientists led by Laura Kehoe, of the Humboldt University of Berlin, Germany, was studying a remote, previously uncontacted group of chimpanzees at Sangaredi, in the Republic of Guinea, in West Africa. It was very exciting, as these were chimps who did not live within a protected area and had never been studied before, the area so remote and isolated that many of them had probably never even seen a human before. It was thought that they might get some sort of new insights into chimp behavior by studying this particular group, but as they set up there far from civilization few of them realized how strange things would get. 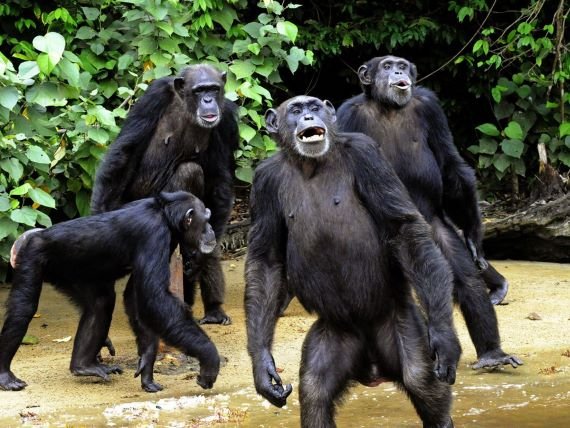 It began with the discovery of a tree that by all appearances seemed to be like any other, but this one was unique in that there was a pile of stones within a hollow in the tree. It looked very much like a cairn, and way out there in the middle of nowhere it was quite an eerie sight to see. At the time, no one knew who had put these rocks there, but it was obvious that they were not a natural formation and had been placed there on purpose, and in addition many of these stones showed signs of wear, as if they had been knocked together or used in some capacity. A look around the immediate vicinity soon showed a few other trees with the same anomalous piles of stones. There were also found to be strange markings on the trees, which were surmised to have been made by wild pigs, but no one knew for sure. The curious team then decided to set up camera traps at the spot to see what they could find out. When the data from the cameras was looked at, the researchers were astonished to see that a male chimp had approached, taken a look around, and then had tossed a rock into the tree hollow. It was quite a bizarre sight, and Kehoe would say of it:

What we saw on this camera was exhilarating – a large male chimp approaches our mystery tree and pauses for a second. He then quickly glances around, grabs a huge rock and flings it full force at the tree trunk. Nothing like this had been seen before and it gave me goose bumps. Jane Goodall first discovered wild chimps using tools in the 1960s. Chimps use twigs, leaves, sticks and some groups even use spears in order to get food. Stones have also been used by chimps to crack open nuts and cut open large fruit. Occasionally, chimps throw rocks in displays of strength to establish their position in a community. But what we discovered during our now-published study wasn’t a random, one-off event, it was a repeated activity with no clear link to gaining food or status – it could be a ritual. Maybe we found the first evidence of chimpanzees creating a kind of shrine that could indicate sacred trees. Indigenous West African people have stone collections at ‘sacred trees’ and such man-made stone collections are commonly observed across the world and look eerily similar to what we have discovered here. Superficially, these cairns appear very similar to what has been described here for chimpanzee accumulative stone throwing sites, thus it would be interesting to explore whether there are any parallels between chimpanzee accumulative stone throwing and human cairn building, especially in regions of West Africa where the local environment is similar. It does seem to be a tradition found in some groups (of chimps). If that fits the definition of proto-ritualistic, I have no problem with it.

There are other theories as to what this might signify as well. For instance, it could be some sort of territorial display, or communication tool, but it is still remarkable when considering other recent discoveries related to chimpanzees seemingly engaged in ritualistic, symbolic behavior. For example, chimps have been observed to do a sort of ritual dance during heavy rainfall, as well as a group of chimpanzees that were witnessed doing an odd type of slow motion dance maneuver during a raging brush fire in Senegal, and there have also been these dance displays performed in front of waterfalls as well, all of it suggesting that these animals somehow understand these natural phenomena on a conceptual level and are paying their respects or even straight out worshipping them. If this is the case, it would be the first known instances of this in an animal outside of human beings, and show that these creatures have in a sense a form of religion, and that perhaps these trees that were found are a sort of temple or shrines for these creatures. There are still some skeptics resistant to this idea, though, and one primate cognitive psychologist, Laurie Santos of Yale University, has said of the findings with the stones and trees:

It’s such a cool observation. But I worry that we don’t yet know how to interpret it. In my monkey behaviour experience, low noises often serve a communicative function – males trying to act dominant, etc. – so my instinct is that this behaviour might work a lot like that. We’d need more observation – and perhaps actual experiments – to know if chimpanzees are using the behaviour as anything like a ritual. 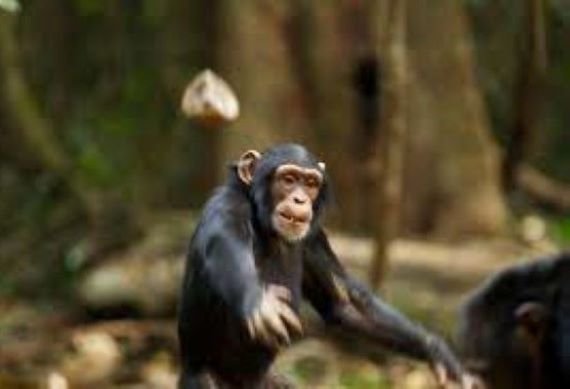 Nevertheless, if this is indeed indicative of symbolic rituals in chimpanzees, then it could give us a never-before-seen glimpse into the evolution of religion and ritualistic behavior in early humans and give new insights into our own past. Kehoe’s study has said of this:

Incidentally, chimpanzee accumulative stone throwing and the subsequent aggregation of tools at particular trees shares two important features with human ritual practices: the strong association to a particular location or site with a collection of artefacts over time, and ritualized behaviour patterns. Although there is no overarching, agreed-upon definition of ritual, similarities between ritualized animal behaviour and the repeated, stereotyped behaviours commonly observed during human rituals have already been proposed by anthropologists and ethologists as having a common origin, as well as sharing similar neurological pathways. From a phylogenetic perspective, we suggest that further research on naturally occurring stone tool-use traditions in nonhuman primates, especially those whose occurrence appears to be tied to specific locations with no immediate functional benefit to the individual, namely accumulative stone throwing in chimpanzees and stone-handling behaviour in Japanese macaques, could serve to enlighten our understanding of the origins of ritual sites. At the very least, stone accumulation sites produced by extant nonhuman primates have the potential to challenge and refine our interpretations of hominin archaeological assemblages in similar contexts.

The behavior has since been witnessed in other groups of chimps, but only to the west. At the moment, it is difficult to say why the chimps of these West African regions display this apparent worshipping, ritualistic behavior. We simply don't know enough, and it is impossible to know whether they really are exhibiting crude religion or if we are just over-anthropomorphizing them. Are these animals really showing an understanding of spiritual awareness and worship, or is there something else going on? Whatever the case may be, those chimps are still out there, doing their dances and throwing their rocks at their sacred trees, and it may provide a deep look into the murky origins of our own religions as a species.