The Mysterious Wilderness Vanishing and Death of Jacob Gray

National Parks and the wilderness in general have long been a magnet for strange disappearances and oddities. On April 5, 2017,22-year-old Jacob Gray left his home in left Port Townsend, Washington to go on a bike ride. It was a sturdy bike, and behind him he towed a trailer full of all sorts of camping gear he would need for his journey, which was to be a cross country trip from Washington to Vermont, where his brother lived stationed there with the U.S. Coast Guard. Unfortunately, he would never arrive, and thus would mark the beginning of a strange unsolved mystery surrounded by bizarre clues.

It began when that day, a woman came across the bicycle and trailer stopped along the Sol Duc Hot Springs Road in the Daniel J. Evans Wilderness in Olympic National Park, in Washington, somewhat off the road in brush but still visible by anyone passing by, and she immediately recognized it because she had seen a young man riding it only 2 hours before. She did not see any sign of anyone there, and mentioned it to rangers in the area. The bike stayed there the whole day, and when rangers checked the following morning to find it still there untouched it was seen as a bit odd. Rangers decided to investigate and found that the bike had belonged to Jacob Gray based on a list of phone numbers in his notebook. The trailer with all of its gear seemed to have been abandoned there, with no sign of Jacob, yet there were signs that he had tried to set up a camp of some sort. There was a tarp laid out on the ground and miscellaneous camping equipment laid out, but Jacob seems to have suddenly left the area before it could all be fully set up. There was a weird little detail in that four arrows had been stuck into the ground in an east-west line, but no one could figure out why he would have wanted to do that or what it signified.

A look at the bike showed it to be still totally functional, with no flat tires or any reason why Jacob couldn’t have continued along. So where had he gone? No one had a clue. A quick search of the area showed no trace of where Jacob could have gone, there was no sign of a struggle or animal attack, and there was nothing strange found in the nearby river either. Oddly, none of his gear had been brought with him, so authorities were beginning to think he had perhaps wandered off to go exploring and had gotten lost, but why do that in the middle of setting up camp and why had those arrows been eerily stuck into the ground? Things would get weirder when Jacob’s family was contacted and it turned out that he had told no one of his plans to go visit his brother out east, and in fact had told no one he was leaving at all. The only one who had known about it was Jacob’s brother, Micah. Another oddity was that Micah said that Jacob had planned to visit him in Vermont, yet the abandoned bicycle and trailer had been found at the Daniel J. Evans Wilderness in Olympic National Park, which was actually to the west of where he had been heading. Why should this be? He had no reason to visit the park and had not told his brother about that detour, so it was seen as very strange.

A larger search effort was launched, using tracker dogs and dozens of volunteers and search and rescue personnel, although it did not get under way until several days after Jacob had been missing, which was puzzling to his family. On April 12 there were found tracks that suggested that the missing man had at some point switched from hiking boots to running shoes for some reason, and there were also found signs that someone may have fallen into the river, in the form of a scuff mark on a mossy rock, as well as signs that someone may have tried to exit the water further downstream. This new lead sparked an intensive search of all logjams in the area for 12 miles downstream using cadaver dogs, but no sign of a body was found. Jacob’s father, Randy, even personally put on a wetsuit to go diving to search the bottom, but there was no body there. On April 15, there would be another promising clue when a pair of shorts were found a few miles downstream, but it was unknown if these had even belonged to the missing man, or why they should have been removed in the first place. At this point, the main theory was that Jacob had accidentally slipped and fallen into the river, but with no body no one could be sure.

As this was going on there were fliers distributed throughout the region, but these turned up no hits, and when there was no further sign of Jacob Gray the search was scaled back and dried up almost entirely, with only the missing man’s family tirelessly trudging on with their own teams on their own, but they never found anything. Another official search would not be carried out until 2017, which also turned up nothing. It was as if Jacob Gray had evaporated into thin air. It would not be until August of 2018 that any new clues would be found, and it was not the outcome anyone would have hoped for. 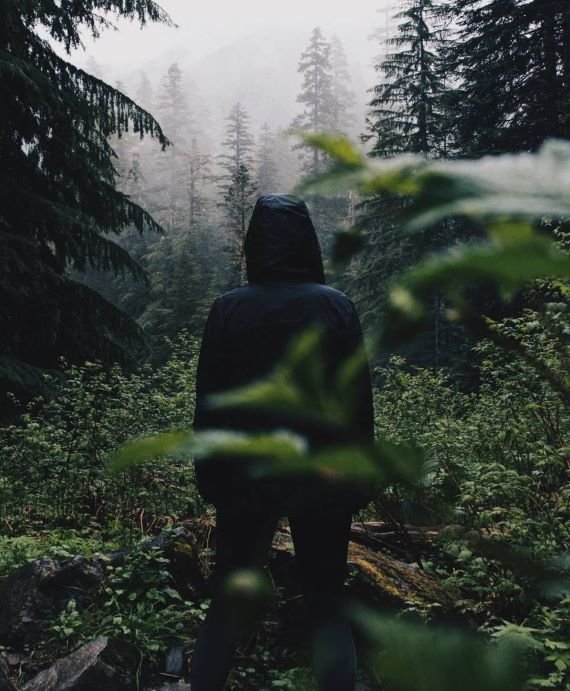 On August 10, 2018, some Olympic National Park employees found some abandoned camping equipment at Hoh Lake. Later that day, a macabre discovery would be made when some biologists who were in the area studying marmots stumbled across a treeless ridge above the lake and 5,300 feet above sea level, that had clothing, camping gear, a wallet, and skeletal human remains that would soon be identified as those of the missing Jacob Gray. This discovery would answer the question of Jacob’s ultimate fate, but it also left many new unanswered questions. One was that the body was found 15 miles from the abandoned bike, well off the nearest trail and at a much higher altitude through rugged terrain, and what’s more, at the time of the disappearance it would have been well within the snowline and covered with snow. Why would he have wanted to venture there, of all places? Also strange is that the remains were found with plenty of food and were dressed warmly, so how had he died? The Clallam County Coroner’s office would not be able to find a clear cause of death, ultimately deeming the cause to be “inconclusive.”

There are numerous oddities surrounding this case and lingering unanswered questions. Why didn’t he tell anyone where he was going, and why did he head west instead of east as he had planned? Why was he in the Daniel J. Evans Wilderness in Olympic National Park? Why had he left his camp in the middle of setting it up and what was the meaning of those arrows stuck in the ground? Indeed, why had he chosen that spot along the road as a campsite in the first place? Why head up towards the snowline, when the natural instinct for most people when lost is to head downhill? Why would he have wandered off the trail in the first place to make his way up to that lonely, treeless ridge, why change his shoes to sneakers, and how exactly did he die? What was with the slow response with search efforts? These are questions we have no answers for at the moment, and it remains a spooky mystery.