The Strange Tale of the Sorcerer of Scotland

History is populated by strange and enigmatic individuals who have managed to become larger than life through centuries of legends orbiting them. We are often unable to fully untangle fact from fiction with such characters, often left to sift through what might have been real and what is pure fantasy. One such person is a supposedly powerful wizard who once lived in Scotland, and around who many tales have been spun.

When talking about the legendary historical figure Michael Scott it is rather hard at times to disentangle fact from fantasy. What is sort of known is that he was probably born in 1175 somewhere in Scotland, possibly at a place called Fife, also known as the Borders. It is also known that he was a consummate scholar and intellectual, studying theology, philosophy, mathematics, and medicine at Oxford, Paris and Toledo universities, and he could also speak several different languages, including Latin, Greek, Arabic and Hebrew. Indeed, he became well-known as a skilled translator of texts, to the point that he was recruited by holy Roman Emperor Frederick II for the purposes of translating numerous manuscripts, including Aristotle’s texts on natural sciences, from Arabic to Latin. This was a major boost to Western knowledge of the matter, because many of Aristotle’s works had long been lost to the Latin speaking world, only known through Arabic versions of the texts. In addition to all of these studies and skills, Scott was also very much into studies of all manner of occult topics, including astrology, alchemy, divination, fortune telling, sorcery, and physiognomy, which is the practice of assessing a person's character or personality from their outer appearance, in particular the face. It was quite likely that all of this, plus his knowledge of Middle Eastern practices, considered to be very exotic at the time, as well as his eccentric habit of dressing in the clothes of an Arabian sage, is where his reputation as a wizard began.

Scot was allegedly quite a skilled astrologer, and such were his abilities that Frederick II ended up making him a part of his court as his official astrologer. During his time at the court, Scott is said to have made many astounding predictions that came true, including the outcome of battles and various calamities and catastrophes. His power of prophecy was so potent that he is said to have even predicted his own death. He purportedly proclaimed that he was to die from a falling pebble, and was so sure of this that he would wear a helmet about wherever he went. It was seen as just another of his many eccentricities, and would only become clear how right he was until 1235, when he removed his helmet to attend mass only to be struck by a rock falling from the ceiling to hit him in the head and lead to sickness and his death.

Scot’s powers of astrology became so famous that he began to be credited with an array of other magical abilities as well. For instance, he was said to be able to induce visions in a subject, as well as to read minds, compel people to do what he wanted, and “fetch on occasion, by magic art, from the kitchen of great Princes whatever he needed for his table.” His skills with alchemy were also well-noted, as it was said that Scott could turn lead to gold or spin rope out of sand. He was even believed to be able to summon demons and spirits and compel them to do his bidding, and it all got even wilder and more fantastical from there. Scot would be later be mentioned as having a magic staff that could part rivers, turn people to stone, and on one occasion even split the Eildon Hills into the three peaks, and he also supposedly possessed a magic steed that could take him from Scotland to France in a single night. Such is his legend that he was even mentioned in Dante’s Inferno as a Scot banished to the 8th level of Hell, a place reserved for magicians and false prophets. That he should be portrayed as a sinner is probably not so surprising, considering his reputation as a sorcerer made him seem to be in league with the Devil, not helped by the fact that his patron Frederick II was excommunicated twice and even labelled the Antichrist by at least one Pope. 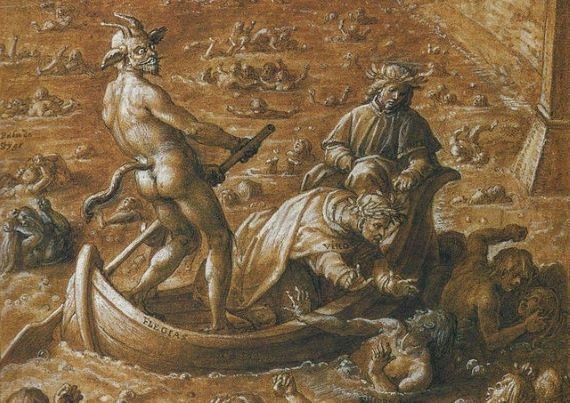 During his career, Scot would write numerous manuscripts and treatises, covering such a vast array of subjects as the occult, esotericism, astrology, human anatomy, physiology and reproduction, and zoology, and he is undoubtedly an immensely important person in history, so it is interesting that so little is actually known about the real man behind the legends. It is not even known exactly how or when he died, although legend has it that he was buried near a cross at Melrose Abbey along with his magic books. Like most of his life, no one really knows. He remains a curious historical phantom, dwelling somewhere between reality and fantasy, his legend overshadowing any truth his tale may hold, and we may never know for sure the whole story behind the mysterious Michael Scot.

Bio-Warfare, the Roswell Affair and a Japanese Connection